Electric Vehicles And The Collapse In Oil, Polymers Demand 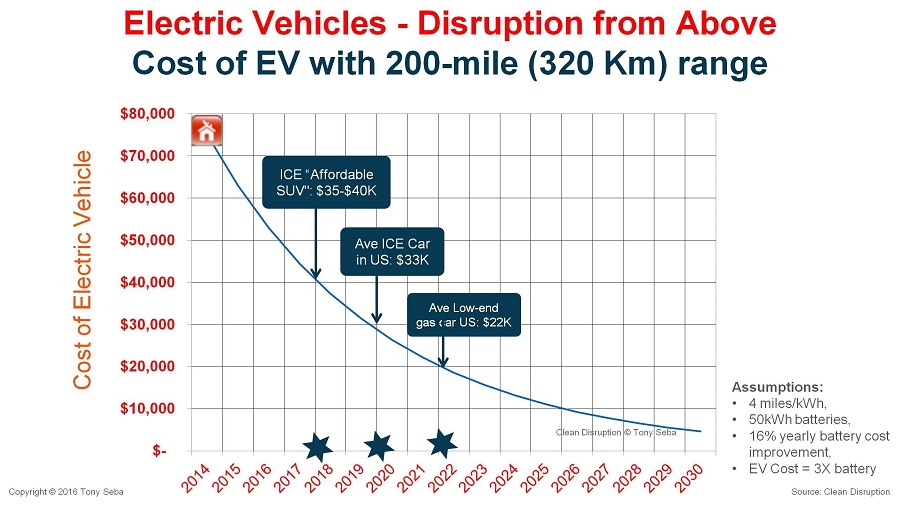 The petrochemicals and polymers industry is at risk of making a mistake of the same magnitude by underestimating the growth of electric autonomous-driven vehicles.

All mass-market vehicle sales will be electric by 2030, according to the author and Stanford University lecturer, Tony Seba.

And what’s more, he believes that the majority of vehicle sales will be autonomous, with the vehicles owned by hire companies. The vast majority of people will opt for hiring rides, via smartphone apps etc., only when they need them because this will be 10 times cheaper per mile of travel than owning a car.

This would of course result in a collapse in oil demand as electric engines replace the internal combustion engine. Seba is also predicting an 80% fewer cars on the road by 2030 as a result of car sharing. This would mean a collapse in demand for the polymers that go into automobiles.

His argument is based on the speed with which technologies enabling electric and autonomous vehicles are moving forward.

The cost of energy storage in lithium-ion batteries has been declining by 16% per year. This makes for much more affordable batteries that can store more power, resulting in a rising number of miles between recharges.

Electricity for recharging will become cheaper because of the fall in the costs of solar power. Going off-grid will become viable for many millions more people.

A key technology enabling autonomous driving has collapsed in price. Eight years ago, Light Detection and Ranging (LIDAR) devices that sense the location of other cars, people and building etc. cost $70,000 each. Now they are just $250 each and might soon be only $90.

No room for complacency

It is easy to think of reasons why the internal combustion engine will still be very much part of mass-market auto sales in 2030.

The cost and efficiency of batteries may continue to fall, but how would vehicle owners in densely populated streets charge their batteries? Imagine a row of terraced houses in London. Then imagine a night-time scene of dozens of recharging wires criss-crossing the street. That would be impractical and dangerous.

As for autonomous driving, trust will be the key. How quickly will people trust a machine to the make all the decisions for them?

But despite the bad publicity surrounding recent accidents involving autonomous vehicles, computers are already much better at driving than people and will improve even further. Human beings are in my view too irrational, too emotional, and too easily bored and distracted, to be allowed behind a wheel for safety reasons if there are better alternatives.

Autonomous driving can greatly reduce the number of road deaths which globally total around 1.25 million a year. The healthcare cost savings might be so great that governments will stop people from driving cars by making insurance for self-driven cars prohibitively expensive.

Sure, Seba could be only half right. But if 50% of all sales in 2030 comprise electric computer-driven cars, this would still represent a major decline in oil and polymers demand.