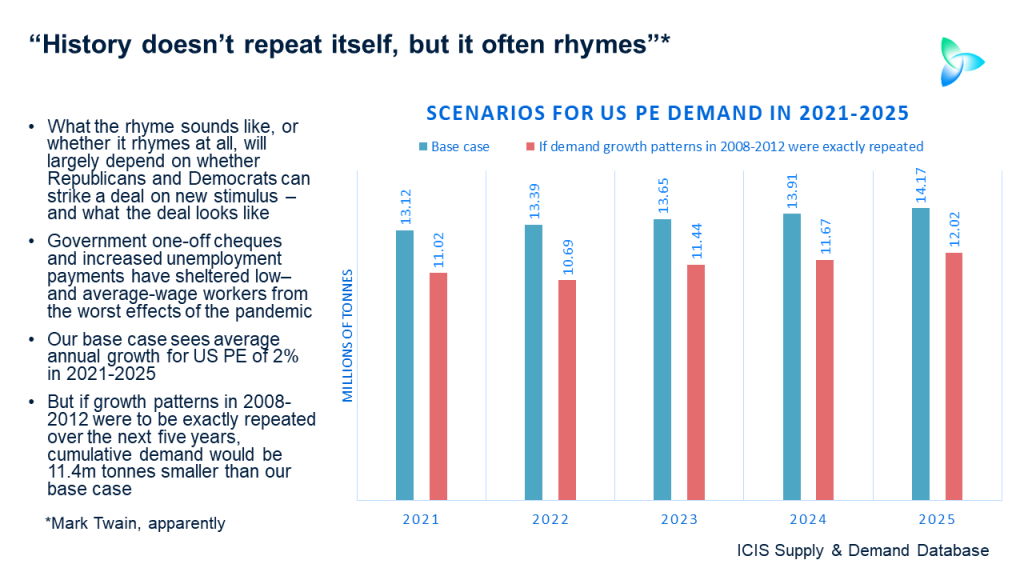 GOVERNMENT stimulus is crucial for protecting polyethylene (PE) markets in the West from the worst effects of the pandemic, in my opinion. The developing world is a different story because of the rise of extreme poverty.

There are other factors behind the resilience of PE demand the US and the EU such as greater consumption of hygiene products. This has boosted sales of bottles of disinfectant, made from high density PE and disinfectant wipes wrapped in low density PE and/or linear low-density PE.

But I maintain that the biggest reason PE has done so well, relative to the Global Financial Crisis period, is government stimulus. I have heard one report from a Western retailer of a fall in the average size of shopping baskets over the last few weeks. This is thought to be because of concerns over whether US and EU government stimulus programmes will continue. The programmes have mainly benefited low-to-average income earners.

As people spend more time at home, shopping habits appear to have changed. Sales of family-sized chocolate bars to couples and singles are said to have increased as low and average wage earners buy themselves a little comfort, thanks to government cash. UK spending on biscuits in the four weeks  to 12 July increased by £19m compared with the same period last year.

Let’s now just focus on the US and the evidence that lower-paid workers are in particular much better off now than they were in 2008, as well as in the years immediately after the financial crash.

From May 2009 to May 2011, daily consumer spending rose by 16% among Americans earning more than $90,000 a year; among all other Americans, spending was completely flat, according to Gallup. Between Q1 2007 to the first quarter of 2010, US finance shed 8% of its jobs compared with 27% in construction and 17% in manufacturing.

“Housing crashed hardest in the exurbs and in more-affordable, once fast-growing areas like Phoenix, Las Vegas, and much of Florida—all meccas for aspiring middle-class families with limited savings and education,” wrote The Atlantic in an August 2011 article.

“The Great Recession has quantitatively but not qualitatively changed the trend toward employment polarisation in the US,” wrote the MIT economist David Autor in a 2010 white paper. Job losses had been “far more severe in middle-skilled white- and blue-collar jobs than in either high-skill, white-collar jobs or in low-skill service occupations,” he added.

Rising unemployment normally results in rising US poverty, according to The Economist. “The recession of 2007-2009 prompted the share of Americans classified as poor, on a widely used measure, to jump from 12% to 17%,” wrote the magazine.

Impact of a continued Republican and Democrat impasse

It might of course be the case that Congress has done a deal by the time you read this post. But the odds today look slim. Despite what is said to be significant shortcomings in President Trump’s executive order, there are no signs of an immediate return to the negotiating table.

The reported shortcomings of the president’s executive order include no additional money for small businesses and no repeat of the one-off $1,200 payments to taxpayers. The order involves providing unemployed people with $400 each, less than the $600 payments that expired last month. The president wants states to pay 25% of the cost of the $400, but some states say they don’t have the money because of the pandemic.

In a logical political world, you would have thought a deal would be done, as both sides could suffer from a further impasse as we head towards the November presidential election. But who knows in the US these days?

The good news is the gap between the Republicans and Democrats appears to be narrowing. Republicans initially proposed a $1trn new stimulus package versus the Democrats bid for $3.2trn, but the Democrats are now prepared to discuss something around $2trn.

But the lower the final amount agreed in any deal, the less support for lower-paid American workers.

There are also few signs that the US is recovering from the pandemic. As Bloomberg wrote: “High-frequency indicators show that economic and payroll activity slowed or declined in the weeks following the survey period for the US government’s July jobs report.’’

Over a million workers are filing new unemployment insurance claims every week, and more than half of unemployed Americans have now been without a job for over 16 weeks, added Bloomberg, citing the US Department of Labor. Almost 30m Americans said they didn’t have enough to eat in the week ended 21 July, the wire service said, quoting the US Census.

So, let’s calculate – using our ICIS Supply & Demand data – what might happen if US PE demand growth patterns we saw in the five years from 2008 until 2012 are repeated in the five years between 2021 and 2025.

Under our base case, cumulative demand in 2021-2025 would reach around 68m tonnes. If the 2008-2012 demand patterns were exactly repeated, cumulative consumption would be just 57m tonnes – a 11.4m tonnes difference when you look at the exact numbers.

I am not saying for a moment that this is going to happen. But as the wonderful American writer, Mark Twain, is reported to have said, “History doesn’t repeat itself, but it often rhymes.” Whether history rhymes on this time around will, as I said, largely depend on the extent and effectiveness of future US government stimulus.