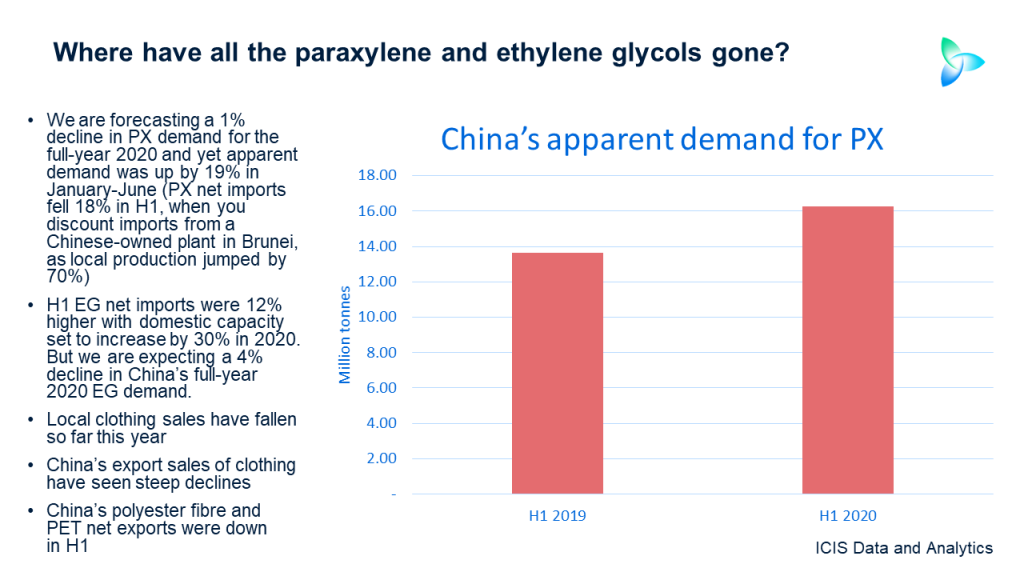 WHERE HAVE all of China’s paraxylene (PX) and ethylene glycols (EG) gone? With suggestions that other commodities such as steel are being stockpiled, this is a question that must be answered as we assess what could happen in H2.

Notwithstanding unexpectedly strong Chinese exports in July (they were up by 7.2% when most analysts had expected a decline – more on this topic later), I still feel that much of the data point to mainly a production-driven economic recovery in China.

China’s oil imports rose by 9.9% in H1 as local refiners took advantage of cheap prices. These imports fed a quick return to full production down several of the manufacturing chains, including refining and petrochemicals, after the country’s coronavirus outbreak had been brought under control.

The $64,000 question therefore remains whether demand will catch up with supply in H2 2020. Remember: although China’s retail sales are better than much of the rest of the world, the country’s retail sales were still down by 11.4% in H1.

Also note that doubts persist over the official report that China’s GDP rebounded to 3.2% In Q2 after being -6.8% in Q1. Capital Economics believes Q1 growth was -10% and the economy could not have grown by more than 2% in Q2. Quantcube Technology, a Paris-based alternative economic data firm, believes it is simply impossible that China’s economy grew at all in Q2. It points to weak shipping and freight data and a rise in job vacancies.

Let’s look at the PX data. During H1, we estimate that domestic production increased by no less than 70% (yes 70%; not a typo) as China pushed towards what I believe will be complete PX self-sufficiency. Net imports from all destinations fell by 10%, which therefore left apparent demand growth (net imports plus local production) at 24%. This is despite our forecast that China’s real PX consumption for the full-year 2020 will decline by 1%.

We, however, need to adjust H1 net imports to take into account the 589,216 tonnes of PX that arrived from Brunei. Brunei Hengyi Petrochemical’s 1.5m tonne/year PX plant is 70% owned by Hengyi – a Chinese purified terephthalic acid (PTA) producer.

But you still end up with a rise in PX apparent demand of 19% if you take the Brunei volume away from total net imports and and again add local production. This is still way ahead of actual demand, surely?

We expect a 4% decline China’s demand for EG during the full-year 2020 (our EG data includes di- and tri-ethylene glycols but mainly comprises mono-ethylene glycols, which is used to make polyester).

And yet H1 EG net imports were up by 12%. We don’t provide monthly estimates of China’s EG production, but for the full-year 2020 we are forecasting a 30% increase in local capacity and there are no reports of major domestic EG production problems during H1 2020.

China’s surprisingly strong July exports reflected what Trade Data Monitor said was a split between being stationary or moving around. Exports of anything related to staying at home were strong as China benefited from a big jump in demand for the hi-tech goods we need to work from home. But auto-component and footwear exports declined.

Global clothing sales have also collapsed because of our lack of money and mobility. Think of all the clothes you used to buy when you worked from your office.

Western retailers have cancelled billions of dollars-worth of orders with developing-world garment manufacturers as retail chains fall into bankruptcy or administration. China, partly because of higher labour costs but also because of the collapse in demand, saw its share of US apparel imports by value drop to 20% in H1 from 30% in 2019.

And as the South China Morning Post points out, a further impediment to China’s clothing trade with the US are the 7.5% tariffs imposed by the US as part of the trade war. The newspaper writes.

China’s total exports of clothing and accessories reached $38.2bn in January-May 2020, a reduction of 22.8%, according to China Customs.

Polyester fibres account for 70% of China’s PX demand, with the other 30% consumed by polyethylene terephthalate (PET) bottle and film-grade resins.

Unless there has been a huge rise in the sales of domestic clothing, non-apparel (pillowcases and bedsheets etc) and/or PET bottles and films, it seems statistically impossible for PX and EG to not be overstocked in China.

But there hasn’t been a boom in the local clothing, accessories and knitwear market, according to data from Statista. There has instead been a decline in sales during H1.

China’s overall retail sales may, of course, come roaring back over the next few months. But, once again, be very careful out there as the evidence-to-date incontrovertibly points to substantial PX and EG overstocking.