Only 4-6 US Cracker Projects Will Happen 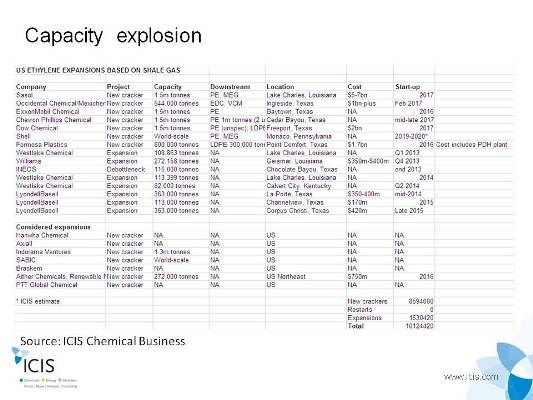 ONLY 4-6 of all the above US cracker projects are likely to go ahead as realisation dawns that both demand and feedstock advantage might not be as strong as previously thought, an industry source told the blog.

“First of all, companies need to factor into demand and supply forecasts the possibility that China’s economy might only grow by around 4% over the next few years,” he said.

A further problem was that ethane supply in the US Gulf Coast was insufficient to meet the demand requirements of all the projects in that region, he added.

“Additional ethane will have to be moved by pipeline to the Gulf from the Bakken shale oil and gas and Marcellus shale gas formations if all the projects are going to happen,” he said.

The Bakken formation is in North Dakota and Montana in the US and Saskatchewan and Manitoba in Canada, whilst the Marcellus straddles the US states of Pennsylvania, West Virginia, Ohio and New York State.

“I believe the logistics will be in place to make this happen but, of course, moving the ethane will incur additional logistics costs.”

There is also the future of ethane and propane costs relative to that of naphtha.

US oil production looks likely to continue to rise as the eventual withdrawal of US stimulus also removes the easy speculation that has artificially inflated crude prices.

A major petrochemicals producer admits that it is maintaining feedstock flexibility in its US cracker operations in case the status quo changes.

Soaring capital costs, resulting from the shale gas and oil construction booms in the States, should give petrochemicals producers further pause for thought.

We really hope that only 4-6 of the proposed cracker projects in the US go ahead, perhaps even fewer, because the complexities and uncertainties detailed above only scratch the surface.