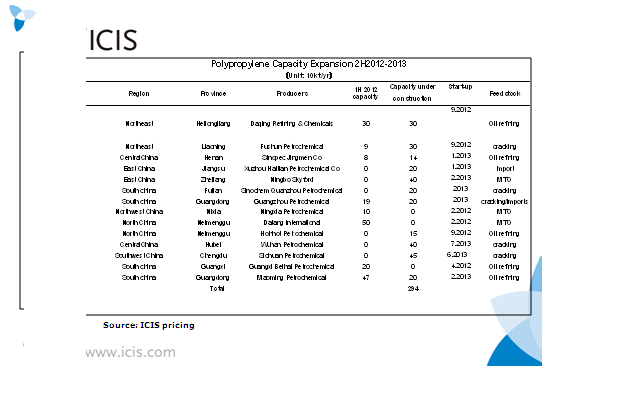 This exceptionally bearish forecast is based on lower demand growth as China undergoes major economic restructuring. The same source earlier told us that his company was predicting that China would see only 4% GDP growth in 2013 and 2014.

Another reason for the bleak outlook for imports is that China is adding a great deal of capacity, particularly in propylene and its derivatives.

Stewart Hardy, consultant with Nexant ChemSystems, for example, estimates that the country plans to bring 40 new polypropylene (PP) plants on-stream in 2013-2019. The above table, from our colleagues at ICIS  pricing, details PP plants due on-stream in China from the second half of last year until the end of 2013

Hardy adds that China is also due to commission:

Some 12m tonnes/year of the total polyolefins capacity that China will bring on-stream 2020 will be based on the methanol to olefins/methanol to propylene processes, says Hardy. He is confident that the economics of the processes work, and that there is also the political will in place to create a significant methanol-based olefins industry in China.

Companies outside China need to rethink their capacity-addition plans.