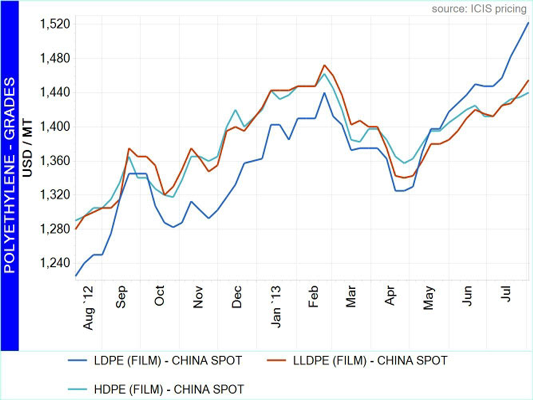 A DRAMATIC dip in the cost of short-term financing seems to further explain why China’s manufacturers  have ramped-up their inventories of raw materials.

When raw-material prices, including those of petrochemicals, start to rise (see the example of polyethylene above), and credit is cheaper, the instinctive response is to stock-up ahead of anticipated further price increases. The desire to build inventories has been further strengthened by the arrival of the 2013 peak manufacturing season.

“The benchmark of borrowing costs for banks, known as the seven-day repurchase agreement rate, has fallen to 3.73%, down from 4.14% a week ago,” said the Wall Street Journal in this article.

“The rate hit a record 30% on 20 June at the height of a liquidity crisis that left banks scrambling for cash to meet urgent end-of-quarter funding needs,” added the newspaper.

“Much-lower seven-day repurchase rates have made it a great deal easier for small and medium-sized enterprises (SMEs) to source and afford letters of credit,” said a source with a global polyolefins producer. It is the SMEs that buy the bulk of chemicals and polymers in China.

Some plastic converters seem to have also interpreted cheaper money as a sign that the government is firmly “pro-growth” again, thus increasing their appetite for risk.

“A few of my customers think that Beijing has changed course. They think that because the June credit crunch caused so many problems, the government has shifted its whole policy direction away from difficult long-term reforms,” said a polyolefins trader.

But the WSJ added that the People’s Bank of China (PBOC) has been using other tools to engineer a rise in longer-term interest rates designed to keep inflation subdued and keep broad economic reforms on track.

“The PBOC’s intention is to stabilise short-term liquidity and push up long-term financing costs simultaneously, so as to facilitate the broader policy goal of cutting financial risks and industrial overcapacity,” Jiang Chao, analyst at Haitong Securities, told the newspaper.

“The average triple-A-rated corporate bond yield also rose to 4.80% on Monday, up from 4.68% a week ago, according to the latest data from China Central Depository & Clearing Co,” wrote the WSJ.

Earlier this week, we argued that traders and chemicals end-users in China (often one and the same thing) could have increased their petrochemicals purchases in order to try and fund longer-term investments, such a real estate.

There is now, obviously, a big arbitrage between cheap short-term borrowing costs and expensive longer-term loans. Investors could therefore be gambling that their real estate investments will be finished before low-cost short-term financing has to be repaid.

It is a big gamble because Beijing, despite the hopes of some plastic converters, has not changed course – as the two-pronged approach to the cost of financing perfectly illustrates.

The government will, thus, we believe, continue to cross the river by the feeling the stones. More financial-sector policy adjustments seem inevitable as China’s leaders seek to rid the economy of speculation and over-investment.

If you get caught on the wrong side of a further adjustment, you will be in big trouble.

Without The Benefit Of Time

By John Richardson THERE are at least two Chinas out there right now, one where ...