The Perils Of An Even Weaker Yen 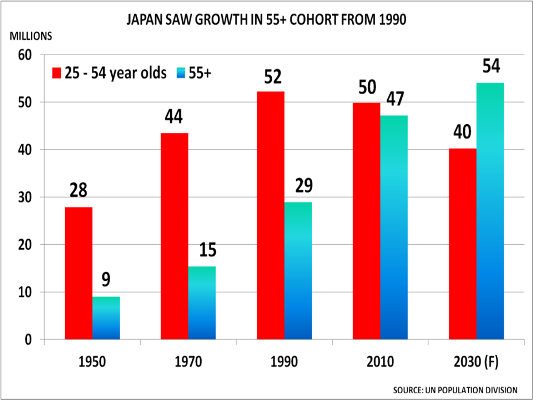 YOU cannot turn 65-year-olds into 35-year-olds, no matter how much central bank stimulus you throw at the problem.

This is why the real, underlying problem with Japan is its demographics which make all the current attempts to stimulate its way to stronger local growth pretty much futile. If there are not enough young people around then, of course, aggregate demand for today’s goods and services  is going to be less than it was 20 years ago, no matter how much you seek to turn to deflation into mild inflation. Demand is also going to continue to decline unless you can retool your manufacturing and services base towards providing the products and services that old people need.

Plus, Japan is exporting to countries in the West that have their own demographic problems – meaning that no matter how low the value of the yen is, Japanese exports will struggle in the long term. Again, the very simple logic is that in countries such as Germany, Italy and Spain there will be far fewer young people around to buy things that we make today.

But the Japanese Prime Minister, Shinzo Abe, unable to push through structural economic reforms that would help deal with his country’s demographic problems, might try even more stimulus in order to preserve his political reputation, warns James Gruber, author of the Asia Confidential newsletter.

“Given the failure of Abenomics to lift core inflation or wages [how can inflation and wages rise when demand is on a long term decline because of an ageing population?], you can soon expect even more stimulus on top of the 290 trillion yen already planned between now and end-2014,” he writes.

“And this is likely to result in a much weaker yen, because, in order  to reach a targeted 2% annual inflation rate requires the yen to depreciate by around 15% per year. That translates into a +115 yen/dollar rate by the end of next year.

And what might be the consequences of a weaker Yen?

“Japan will export even more deflation to the world when it least needs it. By this I mean that a lower yen allows Japanese exporters to price their products more competitively vis-vis other exporters. This would raise already heightened global deflationary risks,” he adds.

“It’ll put other exporting powerhouses, such as Germany, China and South Korea, in a less competitive position, increasing the odds of a backlash via currency war. The yen at 115 or 120/dollar would change the ballgame and increase the risks of this occurring.

“Putting China in a weakened exporting position will possibly increase tensions in the East China Sea. Tensions are already high and a lower yen won’t help the cause.

“You don’t have to have a wild imagination to see that if Japan’s experiment doesn’t help lift inflation and the economy, a desperate, nationalist Prime Minister may just be more inclined to take the fight up to China. “