China: Building The Bear (Or Realistic?) Case For 2014 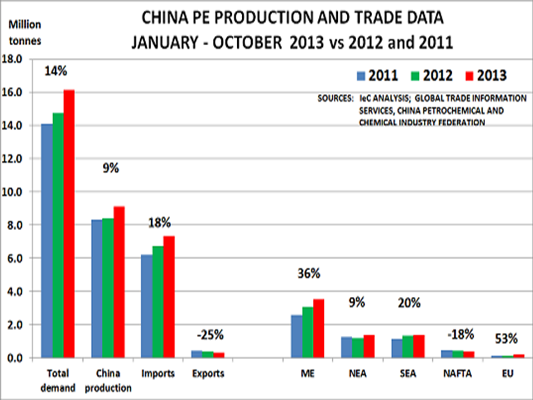 The above slide, compiled from Global Trade Information Services data by fellow blogger Paul Hodges, is further evidence of the tremendous year that polyethylene (PE) has enjoyed in China so far this year.

We think that PE is a pretty good proxy for other polymers and chemicals and so parallels could well be drawn with other markets.

We think that this strong year primarily indicates the increasing, and often inadequately understood, importance of credit cycles and government spending on infrastructure in driving apparent demand growth in China.

Credit creation was out of control in Q1 this year. Around six months later, this extra financing fully impacted the economy

And so in order to try and get a grip on future credit availability, you have to study government policy direction – and how effectively policies might be implemented.

What is easier to read is spending on infrastructure, which is signposted by Beijing months in advance of its full impact on the economy.

Hence, the July “mini stimulus package” has helped to provide a healthy boost to PE demand in Q3 and Q4.

Oil prices are, of course, also important in driving inventory cycles, but there is again a connection here.

One of the arguments why oil should be priced where it is today is that China’s demand for crude is “booming” on easy credit and government spending.

And so producers and traders have been telling us at many stages this year that converters have been buying resin ahead of their immediate needs, on anticipation of higher crude prices.

In assessing 2014, therefore, we think that conventional measures of supply and demand will only get you so far. You have to build scenarios on credit cycles and government spending in order to adequately plan for next year.

Do we fully understand credit cycles and government spending? Of course not, and we would be incredibly big-headed to pretend otherwise.

It is also worth quoting a post Plenum speech by Xi Jinping, China’s president, in which he said:

“China should press ahead with sweeping reforms in order to facilitate development and enhance transformation of the development pattern and improvement of people’s livelihood.  Reform should first target areas for which the Chinese public has the most expectations for reform, and focus on problems that have hindered the country’s economic and social development.  All of society should be allowed to feel the tangible benefits of the reforms, so as to rally positive energy for further reforms.

“For next year, China should effectively safeguard food security, adjust industrial structure, promote more balanced development among regions, improve people’s livelihood, step up air pollution control and continuously improve opening up.  Sweeping reforms are relevant to all aspects and people, so it is necessary to build consensus and seek unity of thinking.”

As Paul wrote in his blog post on this same subject, there wasn’t a single word in the speech about more government stimulus.

And it is worth emphasising again that when stock building is taken out of the equation, the 14% apparent demand growth number quoted above will end up as being underlying, real demand growth of only 4-6% for 2013, according to several producers interviewed by the blog.

Any company that doesn’t include a significant downside scenario into its planning for 2014 is, therefore, risking a very challenging year.