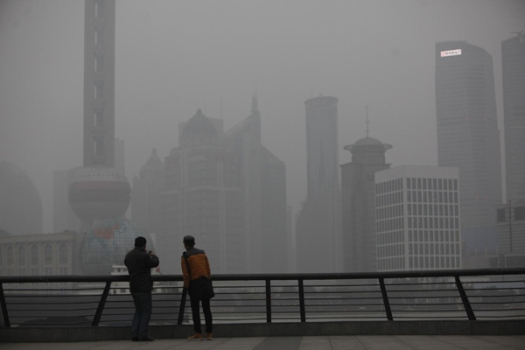 “I FEEL like I’m living in clouds of smog,” Zheng Qiaoyun, a Shanghai resident who kept her 6-month-old son at home told the UK’s Guardian newspaper.

“I have a headache, I’m coughing, and it’s hard to breathe on my way to my office.”

The reason was another pollution scare in China, this time in Shanghai. The city’s concentration of harmful PM 2.5 particles was 602.5 micrograms per cubic meter last Friday afternoon –  the highest  since the city began recording such data last December. This compares with the World Health Organisation’s safety guideline of 25 micrograms.

The filthy air is, of course, as everyone knows, the result of coal-fired power stations, small-scale diesel generators, poor environmental standards at some chemicals and another manufacturing plants and explosive growth in autos ownership.

Jokes don’t keep you healthy, however. There is not much point in being rich if your life is at severe risk from pollution-related illnesses.

Thus,  many educated Chinese – who must stay in China if the country is going to escape the middle-income trap – might decide to leave.

And those who stay behind could be very unwilling to have children.

“I wouldn’t want to start a family unless I left the country because of the high cost of living. More importantly, though, I worry about pollution and food safety standards. The big cities in China are no longer healthy places to raise a family,” a Beijing woman in early 30s, who works for a global bank, told the blog.

This is another reason to believe that the decision to relax the one-child policy, made at last month’s crucial Third Plenum, will not solve China’s demographic problems.

China’s politicians made all the right noises about cleaning up the environment during the Third Plenum, which is a positive start.

But we continue to worry that entirely new individual and collective incentive systems need to be built in order to ensure that local governments and industrialists do the right thing – whether it is cleaning up the environment or being more prudent about adding new industrial capacity.

Everything might turn out alright in the end. But if it doesn’t, what is the global chemicals industry’s Plan B, given that it has become far-too dependent on China  as source of steady, predictable growth?