Home Blogs Thailand: Papering Over the Cracks May Be Harder

Thailand: Papering Over the Cracks May Be Harder 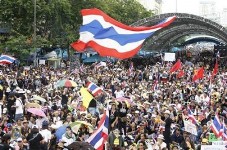 THE longer that the political crisis in Thailand drags on, the more we worry that economic growth will be badly affected. Tourism, for example, is around 10% of the country’s GDP and the Tourism Authority of Thailand estimates that hotel occupancy rates in Bangkok are down to just 30-40%.

Nearly $4 billion has left the country since November, as investors have rushed to sell off Thai assets and currency.

More positively, according to a Bangkok-based chemicals analyst, hotel occupancy rates in tourist hotspots many miles from the unrest, such as Phuket and Chiang Mai, are still at 80-90%. This is Thailand’s peak tourism season and so, hopefully, these rates will continue for the next few months. Tourists, of course, buy a lot of chemicals and polymers.

But what are the chances of a swift political solution? Despite Thailand’s solid track record of papering over the cracks fairly rapidly – for example during the last big fissure in 2010 – we worry that this time might be different.

“The government’s decision to declare a state of emergency is an overreaction that might escalate the situation,” added the chemicals analyst.

“Yes, there has been some violence, and a lot of people have been injured, but the  protestors remain basically peaceful.

He added that, to date, the crisis has not affected chemicals production as, obviously, chemicals plants are not in the centre of Bangkok and the protestors haven’t tried to disrupt ports and major trunk roads.

Rumours that exports would be impacted because of a slowdown in the processing of paperwork by government officials – as some government buildings have been closed by the protestors – were also dismissed by the analyst.

“My concern, though, is that we could end up with a government that cannot make economic decisions over the next year or so,” he added.

“If there is a coup and the current government is replaced, then the new administration would concentrate on governance reforms rather than on economic matters.

“And if the current government is replaced peacefully, then the same thing would happen, as the new administration would be focused on reforming how Thailand is governed, rather than dealing with its economic issues.

“The third option is that the present government stays in office. If this happens, I think it might well be too focused on security issues, leaving it unable to deal with Thailand’s economic problems.”

The blog worries that the 2 February general election will not solve anything because:

“As far as chemicals stocks go, the more that a company has exposure to overseas earnings the better. This might put PTT Global Chemicals in a stronger position compared with some of its competitors,” continued the chemicals analyst.

This underlines the risks to domestic growth from a crisis that could not have come at a worse time for Thailand, as emerging markets in general are likely to struggle as a result of Fed tapering. Now we also have the wider effect of the Peso crisis in Argentina, which we shall consider in a separate post.

And, as we discussed earlier this month, if this crisis drags on and on and on, Thailand’s plan to play a leading role in regional petrochemicals development might be affected.

We sincerely hope that this is all way too pessimistic and that the crisis will be sorted out very soon.

All the very best to the blog’s friends and contacts in Thailand, and keep safe.