Dow Chemical And Back To The Future 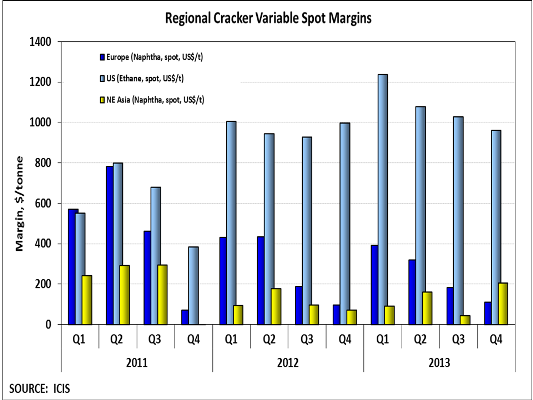 HOW the world has changed. Dan Loeb of the Hedge fund, Third Point, wrote in a letter proposing a spin-off of Dow Chemical’s petrochemicals assets: “We suspect that Dow’s push downstream has led the company to use its upstream assets to subsidise certain downstream derivatives, either by sacrificing operational efficiency or making poor capital allocation decisions, or both.

“We suspect that Dow’s push downstream has led the company to use its upstream assets to subsidise certain downstream derivatives either by sacrificing operational efficiency or making poor capital allocation decisions, or both.

“Our analysis suggests that Dow’s downstream migration strategy within petrochemicals has not yielded material benefits so far and instead may be a significant drag on profitability.”

“Dow’s opaque and inconsistent transfer pricing methodology for internally sourced raw materials,” in other words, as my colleague Nigel Davis points out in this article, its segment reporting within which Hydrocarbons and Energy represents the operations that procure cracker feedstocks and supply monomers to other parts of Dow.

Six years ago, before the shale gas boom, which most of us, including the blog missed, all the talk was of the need for companies like Dow to get rid of upstream petrochemicals assets, rather than invest more in them, because of feedstock disadvantages.

The future for Dow, and more broadly for other Western petchems majors, which at that time lacked feedstock advantage compared with their Middle East competitors, was said to be all around differentiation in smaller volume, but higher-priced specialities.

But as my ICIS colleague Joe Chang, editor of our ICB magazine, writes in this second article about the Loeb spin-off initiative:  “UBS’s Roberts [John Roberts, analyst at investment bank UBS] estimates that Dow’s commodity chemical businesses, excluding joint ventures, will generate $39.0bn in sales and $5.3bn in EBITDA in 2014, while the speciality chemical units would have sales of $20bn and EBITDA of $3.3bn.

“Hassan Ahmed, analyst at Alembic Global Advisor, points out that Dow’s shares appear undervalued in both scenarios – one where no portfolio changes occur and one where businesses are separated – as investors are not taking into account the earnings potential from major new projects and the upswing in the ethylene cycle.

“The start-ups of Dow’s Sadara joint venture project in Saudi Arabia and its new cracker and propane dehydrogenation (PDH) unit in Texas, along with the commodity upcycle, could add $4.05bn to Dow’s base case annual EBITDA, said Ahmed.”

And what if natural-gas liquids (NGL) prices in the US don’t stay as cheap for as long as many people think? There are all sorts of reasons for this, including liquefied natural gas (LNG) exports and declining NGL production volumes.

And what if naphtha cracking, thanks to a fall in the price of oil, once again ends up in the same competitive ball park as US and Middle East ethane cracking? We could then see margin charts such as the one above consigned to history.

Or what if the petrochemicals world becomes a lot more fragmented, which we think is a very strong possibility. US producers would then, even if they retain their ethane and propane advantage, no longer be operating on anywhere near as level a playing field.

Our point is that the world isn’t constant and so integration matters for petrochemicals-speciality companies – in other words the very thing that is being targeted by Third Point as a weakness.

Higher comparative ethylene and propylene costs would make this integration essential and so a spun-off specialities business might then look vulnerable.

Call us cynical, but if Dow has broken up, there would then be calls for re-integration.

This would make more money for Wall Street, but what about the best long-term value for Dow?

PREVIOUS POST China Is "The Fragile One"
NEXT POST Thailand: Papering Over the Cracks May Be Harder