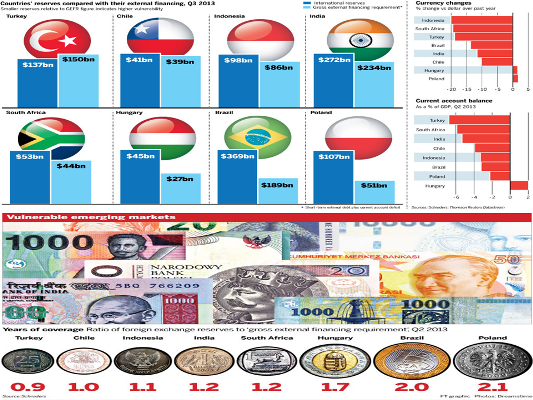 IT used to be just the “Fragile Five” – Brazil, India, Indonesia, South Africa and Turkey.

But last week, the Financial Times, drawing on data and analysis from Schroders, added three more countries to the list of those most-exposed to Fed tapering: Hungary, Poland and Chile. Thus we needed a new handy phrase and so commentators have come with “The Exposed Eight”.

How exposed? According to the World Bank as much as 80% of capital flows to developing countries in general – with perhaps these eight nations, as we said, most exposed – could disappear down the sink-hole for several months if the Fed’s taper is badly disruptive.

The problem for the eight is their perceived lack of ability to repay short-term foreign borrowings as the US dollar strengthens as a result of tapering, says Schroders.

The two charts above, from this Beyondbrics blog post, add more meat to the analysis.

The top chart shows the gross external financing requirements (GEFR) of the eight countries mentioned above.

Meanwhile, the bottom chart shows that in H1 of last year Turkey, Chile, Indonesia, India and South Africa had around just one year of sufficient foreign reserves to cover their respective GEFRs.

But around two years’ coverage, which, as the bottom chart shows applies to Brazil and Poland, is still considered to be quite risky in the event of investor panic.

We saw that type of panic for several months from May of last year when talk of Fed tapering caused the Indian rupee, Indonesian rupiah and other Asian currencies to head south.

Suddenly, all the analysts were talking about the fundamental problems with these economies that had been ignored during the era of ultra-cheap money. These included failure to invest sufficiently in infrastructure and in poverty alleviation through decent sanitation systems and freshwater supply. Concern was also focused on asset bubbles that had enabled the rich to get a lot richer, whilst leaving the middle classes dangerously over-leveraged.

Millions of low-income people could once again suffer as developing markets contract (the rich, especially the super-rich, are usually fine, no matter what the macro-economic circumstances).

For petrochemicals companies,  it is the low-income groups where there is the greatest potential for further growth. The rich do not buy – can never buy because they are always going to be few number – a really significant volume of chemicals and polymers.

Thus it is essential that petrochemicals company planners always look beyond the hype from investment banks during periods of ultra-cheap money. They need to look deep into the structural strengths and weaknesses of countries such as India and Indonesia in order to come up with credible long-term supply and demand analyses.

The Fed might get tapering right, but tapering will still be tapering. There is no escaping the eventual need to ease back on easy money.

And so even if it does get tapering right, developing Asia still needs politicians who focus on dealing with essential needs – freshwater supply, sanitation and adequate food, for example – that will enable millions more people to emerge from poverty, regardless of the availability of “hot money” from foreign investors.

The petrochemicals companies who prosper will also be the ones that get this bigger picture through partnering with the right kind of governments, NGOSs and other agencies in order to help “seed demand” for their products. Standing back and hoping that demand will, automatically, sort itself out is no longer an option in the New Normal.