Getting China And The Fed The Wrong Way Round 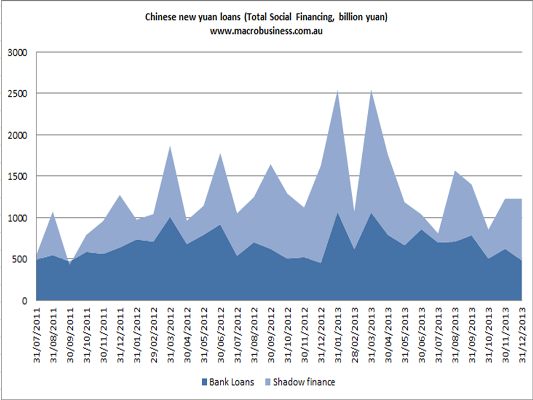 MOST newspapers and wire services still seem to have got it in the wrong way round. Last week, as Argentina’s Peso crisis began, they continued to identify Fed tapering as the number one threat to emerging markets followed by China.

But here’s a reminder: The Fed has spent some $3 trillion on Quantitative Easing since 2008 compared with China’s $6.5 trillion of official lending, never mind the surge in shadow-bank lending.

One negative piece of news about China that was widely reported as a factor behind last week’s sell-off in emerging market currencies and equities was the January flash Markit/HSBC Purchasing Managers’ Index (PMI) for China, which slipped to 49.6 from December’s final reading of 50.5. This represented a six month low.

One explanation for the reading is that the Chinese New Year falls considerably earlier in 2014 – 31 January – compared with 10 February in 2013. Thus, in chemicals and probably other markets, some activity is reported to have wound down in early January.

But we think that the January decline is also an early indication that the “when” has at long last become “now”.

We think it quite likely that official bank lending will on average decline further during Q1 following its dip last December.  Any fall in official loans in January might, again, be dismissed as a seasonal blip, but we feel that the February and March data will underline a longer-term trend.

So might shadow bank lending, which, as the chart above illustrates, remained robust in December.

As Beijing tries to unravel the complex mess of trust and wealth management products that make up the shadow banking system, there is bound to be collateral damage.

The damage will include funding to both the good small and medium-sized enterprises (SMEs) that China wants to thrive and the bad ones that Beijing would be quite happy to let go bust. It is worth noting, again, that the SMEs buy the bulk of chemicals and polymers.

A clear sign that China is also intent on tackling excessive shadow as well as official lending is the likely outcome of the 3 billion-Yuan ($496 million) trust product that’s facing default on 31 January.

“ICBC [Industrial and Commercial Bank of China Ltd] Chairman Jiang Jianqing told CNBC in an interview from the World Economic Forum in Davos, Switzerland that the bank won’t bail out investors in the Credit Equals Gold No. 1 product [the trust fund mentioned above) that it distributed in 2011,” wrote Bloomberg in this article.

This suggests to us that the PBOC backed, of course, by China’s top leaders, is winning its battle against the anti-reformists.

Will China blink at the end of H1 if, as Nomura believes, growth continues to slow?

Some commentators think so, pointing to renewed economic stimulus that was introduced in H2 of both 2012 and 2013, after growth had slowed in the first halves of each of these years.

But we believe that the “mini stimulus package” of July 2013 was really about Beijing building up political support ahead of very painful changes.

Now it has that support in place, the changes can commence, which, in the long term, have the potential to create a sustainable and incredibly successful, new economic growth model.

As acceptance grows that this might well be the “now” when China definitively changes course, we think that there will be more and more claims that the transition will be a smooth and gradual process – so smooth and gradual, in fact, that the global economy be will be barely disrupted.

We think there is a significant risk that the transition will be anything but smooth and gradual. This will be the subject of a later post.

PREVIOUS POST Thailand: Papering Over the Cracks May Be Harder
NEXT POST China's Rough Ride To Sustainable Growth