Thailand Solution Seems Out Of Grasp 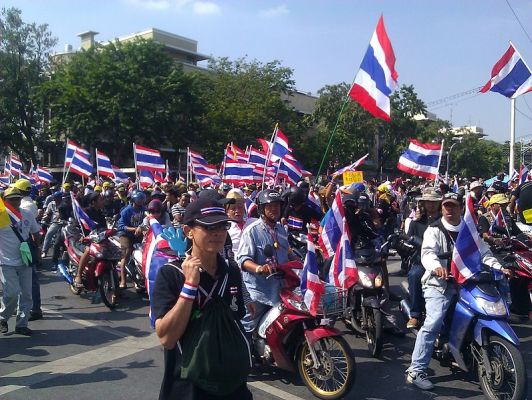 THAILAND looks as if it is likely to be in political turmoil for at least several more months following an inconclusive General Election last Sunday.

The election failed to resolve the crisis because of low voter turnout and some seats being uncontested.

Other obstacles to a quick political fix include legal challenges facing governing party MPs and the Prime Minister (PM).

Concerns are growing that the longer the crisis carries on, the greater will be the damage to an economy which has already seen a sharp decline in tourism. Tourists buy a lot of chemicals and polymers.

The governing Pheu Thai looks set to win the election, but turnout was much lower than expected.

“Of the almost 49 million eligible voters nationwide, only about 20.46 million, or 45.84%, cast their ballots. This is less than in the July 2011 general election which had a 73% turnout,” wrote the Bangkok Post in this article.

These numbers indicate declining support for the government, as more than 90% of polling booths were unaffected by anti-government protests, said several commentators. The protests prevented some people from being able to vote.

“This will strengthen the legitimacy of the anti-government protesters and make it harder for Pheu Thai to govern,” said a Bangkok-based US expatriate resident, who works for a major western bank.

“But, much more importantly, Thailand seems to be heading for a major constitutional crisis. This is likely to add even more to the political turmoil and could thus have very negative implications for economic growth,” he added.

The constitutional crisis is a result of, for example:

“One possible outcome is that Thailand’s Constitutional Court eventually sets up a committee to run the country, resulting in democracy being temporarily suspended. This is what the protesters are calling for,” the chemicals analyst added.

“Another outcome is a military coup. The pressure is still there, but the military doesn’t want to act and will only do so to protect civilian lives and the sovereignty of the country, ” he added.

“Nobody knows how and when this situation is going to be resolved. I don’t think we will have a functioning government until at least the second half of this year.”

The latest round of political unrest in Thailand, which began last November, has already led to downgrades in GDP (gross domestic product) growth forecasts. For example, on 16 January the Thai Finance Ministry cuts its 2014 GDP growth forecast to 3.1% from 4%.

Thailand’s status as a favoured investment destination for manufacturing could also be under threat.

Kyoichi Tanada, the president of Toyota’s Thailand unit, told a press conference on 20 January that the company may reconsider up to Baht20bn ($609m) of further investments in Thailand.

He also warned that new foreign investors may look at opportunities elsewhere.

Also in jeopardy might be plans for Thailand to take the lead in setting up a regional trading bloc involving Thailand, Myanmar, Cambodia, Laos and Vietnam. But this only seems likely if the crisis lasts years rather than months.

But the chemicals analyst added that foreign investors were in no rush to re-evaluate Thailand as the crisis had, to date, not caused a significant impact to earnings.

“And whilst tourist revenues are down, there hasn’t much disruption to manufacturing as a whole – and no disruption to chemicals production,” he said.

Toyota was worried about a dip in local car sales, but he added that per capita incomes across Thailand were still on the rise.

“This means that, when people feel more confident about the political situation, there will be plenty of pent-up demand for autos that’s been sitting on the sidelines.”

But he also highlighted another longer-term threat to Thailand: Failure to move ahead with infrastructure spending.

“The severe floods that Thailand suffered in 2011 temporarily derailed the government’s economic agenda and it has yet to get back on track,” he said.

PREVIOUS POST China's About Turn: The Seven Global Implications
NEXT POST Global Equities, China, The Fed And Some Perspective