Global Equities, China, The Fed And Some Perspective 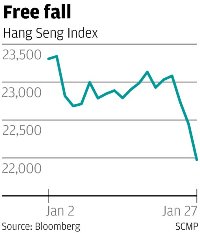 AS USUAL, everyone will take what they want and need to take, in order to protect their own interests, out of Monday – the worst day for the Dow Jones Industrial Average in seven months. This was followed by severe declines in several emerging market indices.

Like everyone else in the somewhat unreal world of observing and/or playing financial markets we at times like this can be pretty much addicted to cable TV news the wire services:

And so we have also heard the pundits tell us that:

But, remember, just a few weeks ago just about everyone was entirely convinced of the sustainability of the US economic rebound.

And yet here we are, just a few weeks later, mulling over disappointing US manufacturing, construction and auto sales numbers, which means we have to ask: Is this really about the cold weather or something more significant?

If you dig deeper into data on auto and housing markets in the US – two key end-use markets for chemicals and polymers – the weaknesses in the recovery theory have been there for a long time.

And then on Tuesday, as the blog broke away from cable TV for a bit more perspective – and therefore, hopefully, some sanity – we read this article in the New York Times.

In summary, it says that:

We have been arguing for approaching two years that there is a “squeezed middle ground” in Western consumer market in general because of the retirement of the Babyboomers. The NYT article adds further statistical weight to our case.

Crucially, also, what if most people have got the Fed and China the wrong way round?

Is it China that is the real problem as it rebalances its economy- and what are the implications for the global economy?

Stock markets might bounce back, of course, but is there something more fundamental here that we need to prepare for?