How China Will Help South Asia Maximise Its Demographic Dividend….

….as the OBOR region, which includes South Asia, pushes towards complete petrochemicals self-sufficiency 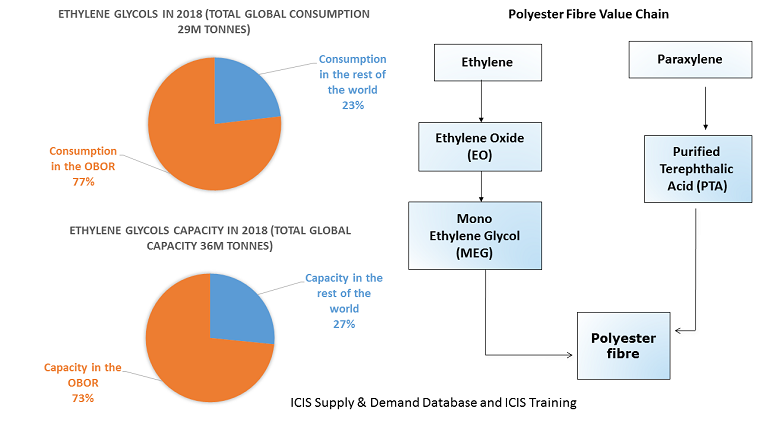 SOUTH ASIA (India, Bangladesh, Nepal, Pakistan and Sri Lanka) is seeing around 1m people join its workforce every month, with this potential demographic dividend set to last for the next two decades, according to the World Bank. That is some 480m additional workers.

Meanwhile, China is losing ground in low cost manufacturing because of its ageing population and so declining working-age population. Average hourly wages for Chinese factory workers reached $3.60 in 2016, a four-fold increase over a decade, estimates market researchers Euromonitor. The average Chinese factory worker now earns about five times as much as their counterpart in India.

But as the FT warns, an industry that has traditionally shifted around the world to wherever labour costs are the lowest – textiles and garments – could end up being yet another industry that sees employment hollowed out by automation.

The good news for South Asia is that this might take a long while given the complexity of all the physical movements and instant mental decisions required to feed fabric through a sewing machine. This is why other than the sewing machine, which is a century-old piece of technology, the textiles and garments industry remains very un-automated.

But robotics and artificial intelligence (AI) have made quicker-than-expected inroads in other industries . Take  autonomous vehicles as a good example. It is perfectly conceivable that ten years or so from now, millions of people around the world will lose their jobs as taxi, bus and even delivery drivers – provided, of course, unloading goods at the end of a journey can also be automated.

For Bangladesh in particular, the threat of automation in textiles and garments is a major concern. No less than 2.5% of its entire population work in the industry which also accounts for 82% of its total exports. In Bangladesh, Pakistan and India some 27m people are employed by the industry.

But automation could be limited by social, political factors

Here is the thing, though: It may not make overall economic sense to press ahead with automation in textile and garments.

China increasingly shifting its textiles and garments factories to South Asia and other lower labour cost locations as at the same time is makes rapid progress in robotics and AI.

But will China always want to employ its state-of-the-art robotics and AI in its overseas textiles and garments factories? Probably not because this would turn the potential demographic dividend in Bangladesh and the rest of South Asia into a demographic nightmare of millions of out-of-work and so depressed and angry young people. This would represent a geopolitical threat to China.

Governments in South Asia might be more than willing to limit automation in certain labour intensive industries because of this wider social, political and economic picture.

What about free-market and free trade, though? You can argue that in today’s globalised trading environment, a T-shirt factory in Pakistan which remains highly labour intensive won’t be able to compete with say a highly automated clothing factory in South Carolina.

But what about the anti-globalisation forces in the West? Donald Trump’s “America First’ agenda threatens to put globalisation into reverse as the US focuses on local jobs for local people.

He has backed away from declaring China a currency manipulator and from an immediate withdrawal from NAFTA. More recent trade investigations into or tariffs against passenger jets, steel and aluminium, washing machines and solar machines do however represent a significant shift towards protectionism. US manufacturers may well be queuing up to petition for further trade investigation, given the White House’s receptiveness.

Across the Atlantic there is also BREXIT and the rise of nationalist politics in mainland Europe – most recently, the turmoil in Spain over the Catalan independence referendum. And what if Emmanuel Macron fails in his efforts to reform the French economy and make the EU more unified? An economic nationalist might win the next French presidential election.

From China’s perspective this is incredibly worrying. Anti-free trade has gathered momentum in the West as it attempts major economic reforms, the success of which depends on a more open rather than more closed trading environment.

The end-result has been an acceleration by China of its One Belt, One Road (OBOR) initiative. The whole of South Asia is in the OBOR region. What China is busy building is the world’s biggest-ever free trade zone, which, because of its enormous size, can by itself be almost entirely economically self-sufficient. It will account for as much as 40% of global GDP with 65 member countries.

So why worry if a shirt factory in say Arkansas is on paper more cost efficient than one India because it uses robots and AI? This won’t make any difference if the T-shirt factory in Arkansas faces import tariffs that make it too expensive to ship to the OBOR region.

The self-sufficiency of the OBOR may well be such that it pretty much supplies all of the textiles and garments it needs from its member countries. Costs of production per pillow case of blouse might not on paper always match costs outside the OBOR, but, as I said, in real term this simply won’t matter.

The same will apply to oil gas, basic building block petrochemicals and their downstream derivatives. The OBOR will become essentially self-contained in certain value chains, with little, if any, need for imports from outside the region.

I’ve obviously chosen the example of ethylene glycols to illustrate this point because it is part of the textiles and garments value chain.

As you can see from the chart on the left at the beginning of this post, 77% of ethylene glycols consumption will next year already be in the OBOR region and 73% of capacity. So the push to a 100% of capacity will be quite easy (the chart on the right is a reminder of the whole of the synthetic fibres value chain

This is how ethylene glycols capacity could be raised.

Improved intra-regional self-sufficiency across the whole polyester fibres value chain could end up boosting the economics of textiles and garments factories. This may compensate for decisions not to adopt the latest robotics and AI technologies.