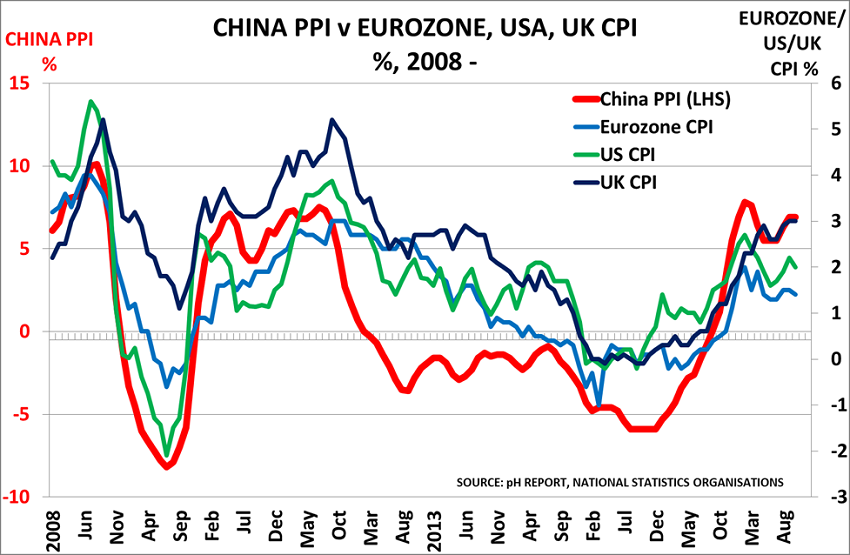 THE ABOVE chart shows the major role that China has played in driving global inflation, deflation – and now inflation again – since 2008. There is a close link between the movements in China’s Producer Price Index (PPI) and Consumer Price Indices (CPIs) in the Eurozone, the US and the UK.

The huge economic stimulus programme China launched immediately after the Global Financial Crisis helped reflate the global economy. As you can see, this stimulus programme dragged China from deep deflation into inflation from late 2008 onwards and in turn supported price rises in the West.

This was sustained until Q3 2012. But then the Chinese PPI began to fall into negative territory as economic stimulus was withdrawn. China realised in late 2012 that it faced a major debt crisis as a result of building many factories with little regard for supply and demand fundamentals.

The government, gradually at first, began to slow down the pace of new credit creation. But from January 2014 onwards, the pace of this credit slowdown picked up. This was the result of the economic reforms laid out during the important 3rd Plenum political meeting in late 2013.

Meanwhile, as economic stimulus was withdrawn, oversupplied industries exported their surpluses at very competitive prices. This added to already existing trade tensions between China and the West (for more on this theme, see the section below – Historical Context: China and Global Deflation. This is my personal view about what is really behind rising trade tensions).

The West cannot afford too much inflation

TVS, refrigerators and computers etc. are set to become more expensive in the West at a time when the spending power of most consumers is under downward pressure. This is the result of yesterday’s demographic dividend of youthful populations turning to today’s demographic deficit of ageing populations.

Sure, supply chains will eventually adjust as more low-value manufacturing moves away from China to other cheaper developing countries. This process has been underway for many years because of China’s rising labour costs.

But further adjustments will take time as China is so firmly embedded in global manufacturing supply chains.  China remains the “workshop of the world” in many manufacturing chains because of the economies of scale of its factories and its excellent logistics. And, in fact, despite its rising labour costs, China’s proportion of global exports rose to 13.8% in 2016, up from 12.3% in 2014. This was the highest share any country has enjoyed since the US in 1968.

Higher China manufactured goods prices may also combine with crude at above $70/bbl. There is a very real chance of our Continuing Tension scenario for oil prices being realised in 2018 on rising geopolitical tensions and Saudi Arabia’s desire to keep crude prices high ahead of the 2018 Saudi Aramco IPO.

It would be thus wise to plan for a harmful inflation shock to the global economy in 2018.

Long term, however, I see global deflation rather than inflation as a bigger threat. This is unless governments come up with effective policies that turn today’s demographic deficit into a dividend. But as the section below explains, some politicians are, in my view, too busy focusing on the wrong problems.

The “China price” of manufactured goods has, as we all know, been the cheapest price for many, many years.

When the Babyboomer generation was at the peak of its earnings power, cheap Chinese exports were on the whole seen as a good rather than a bad thing.  The reason was that there were plenty of working –and middle class jobs available that paid good wages. So people had plenty of money to spend.

This money bought lots more washing machines, TVs, computers and clothing etc. than would otherwise have been the case if it hadn’t been for very cheap Chinese exports. In inflation-adjusted terms, the cost of many manufactured goods fell, thanks to China.

But since 2005, the China price has been increasingly perceived as a bad things, as this was the year that the oldest Babyboomers began to retire. Low birth rates in the West since the 1970s mean that the Boomers are not being replaced by enough young people joining the workforce.

Today we therefore have a growing GDP growth or demand deficit, as older people spend less money than younger people. This demand deficit is one of the main reasons for the loss of working –and middle class  manufacturing jobs that pay good wages. The other big reason for the hollowing-out of Western manufacturing is automation.

China is an easy and obvious target, though. It is easier to blame China for jobs losses rather than develop complex, and politically hard to sell, policies that deal with the challenges of ageing populations and increasing automation. But I believe that this is what will have to happen if we are going to achieve sustainable, broad-based economic recoveries in the West.