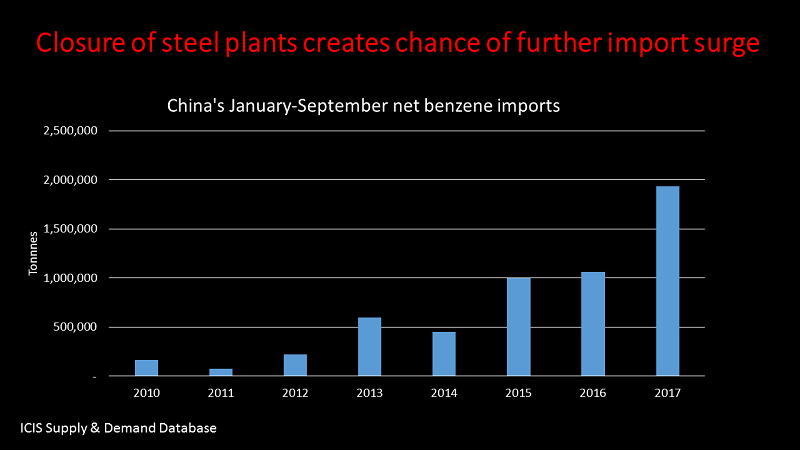 Firstly, though, here is a timeline of events over the past three years:

Implications for the petrochemicals industry

Back in 2000, 11% of China’s benzene production was via a coal as a feedstock, according to our ICIS Supply & Demand database. This will have risen to 20% by the end of this year. Coal-based benzene is a by-product of steel production.

This means major implications for benzene and its value chain of the loss of the some 7.5% of China’s steel production during the five-month long winter air pollution campaign

As you can see from the chart at the beginning of this blog post, China’s benzene net benzene imports had also already risen very strongly in January-September 2017 over the same period in 2016. They stood at a seven-year high.

This has been the result of shutdowns of US styrene plants which forced China to import more benzene to run its own styrene plants at higher operating rates. Styrene demand growth in China during 2017 has also been very good.

We might well now see a further surge in China’s benzene imports on the closure of steel capacity.  This would of course be great news for exporters of benzene to China.

Every petrochemicals value chain will be similarly disrupted, but in different ways.

Take polyolefins as another example. Shutdowns of downstream plastic processing capacity will be far in excess of shutdowns of polyolefins plants during the winter air campaign.

The reason is that most of China’s polyolefins plants are modern, state-of-the-art facilities with good emissions standards. Meanwhile, China has numerous smaller plastic processors where emissions standards do not meet today’s expectations.

Subdued demand resulting from processor shutdowns is one of the reasons why, under our base case assumptions for crude and naphtha prices, we expected China polypropylene (PP) prices to fall in November 2017-April 2018. For the details, subscribe to our ICIS Asian Monthly PP Price Forecasting Report.

And whilst we are on the subject of polyolefins, what of the longer term future of coal-to-olefins (CTO) capacity additions? Will CTO investments come to a halt because of China’s move away from coal as an energy source? Or will employment creation, via CTO plants, be more important than the environment?

Several styrene butadiene rubber (SBR) plants were also forced to shut down in October because they were operating coal-fired furnaces. These have been replaced by furnaces run on electricity. This of course tightened SBR markets.

This scratches the surface. Every product chain is likely to have its own slightly different dynamics, creating great opportunities and challenges.

What we can conclude in general  is that supply disruptions will continue throughout the five months of the winter pollution campaign.

And because the Chinese government is so deadly serious about its war against pollution, the nationwide programme of environmental inspections will continue throughout 2018. Expect therefore more petrochemicals and downstream plant closures.

Nobody should also be surprised if further legislation to clean up the environment is introduced. Take the national emissions trading scheme which is expected to be launched by the end of this year as an example. Initially, it will cover just power generation, but could eventually be expanded to cover petrochemicals.

Here is another broad key takeaway. The environmental campaign is just one element of an entirely new economic growth model that China is attempting to build. Gauging the implications of this new growth model on the petrochemicals industry depends on a good understanding of government policy.

You will firstly need to know every detail of each new policy initiative. Then you will have to constantly monitor how policies are being implemented. Are you adequately resourced to achieve this?

PREVIOUS POST Asian Polyethylene Producers: What You Must Do Now $70 Crude Is More Likely
NEXT POST Global Economy Is Less Able To Withstand A New Oil Price Shock