Home Blogs Asian Chemical Connections US Polyethylene: Even Without Trade War, $6.2bn Of Sales In China At Risk

US Polyethylene: Even Without Trade War, $6.2bn Of Sales In China At Risk 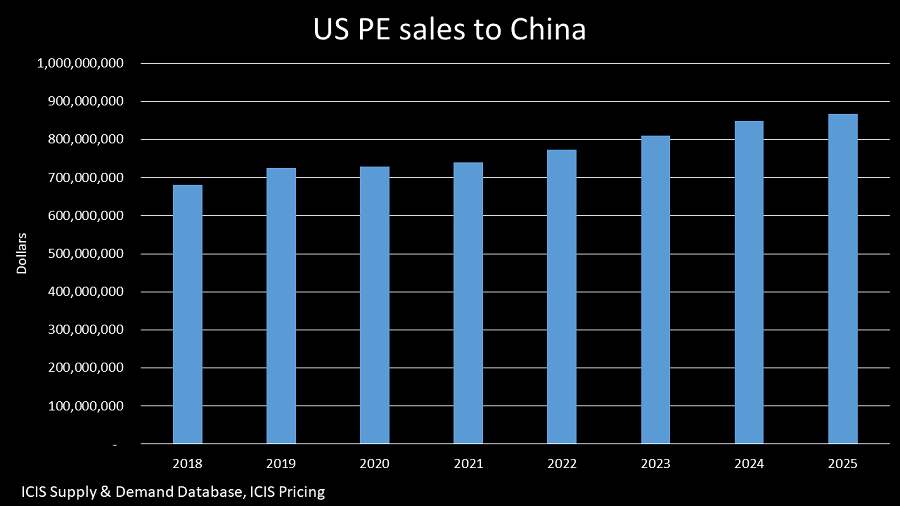 AS THE number of exemptions from the new US steel and aluminium tariffs grow for Americas “friends”, the direct impact of the tariffs might end up being fairly minimal. So far, Canada, Mexico and Australia have been let off the hook.

But the national security basis upon which the tariffs have been introduced could open up a Pandora’s Box of likeminded measures.  As it is almost impossible to disprove a claim that national security has been damaged by cheap imports, what is the point in complaining to the World Trade Organisation (WTO) if the US and other countries introduce new tariffs on that basis? The WTO can only adjudicate on clear evidence.

You can thus easily imagine how this might play out:

China may respond in this way because at this stage in its economic development it needs more, not less, access to intellectual property rights. The reason, as is the case with most things in economics, relates to demographics.

China and its middle-income trap

The number of babies born in China during the One Child Policy was 400m lower than would otherwise have been the case, according to Chinese government research. For this reason, China is experiencing the same pattern of population ageing as in the West. The One Child Policy was in place from 1979 until 2016.

In coastal rich China, wage costs are rising because the population is ageing. This makes lower-value manufacturing no longer competitive. China has thus fallen into what is called a middle-income trap. It has to raise the value of its manufacturing and service industries by enough to escape the trap otherwise history suggests that its economy will stagnate.

Because of low inland income levels, China has insufficient tax revenues to meet rapidly increasing healthcare and pension costs. For example, 36% of the Chinese population – 500m Chinese citizens – still live on less than $5.50 a day, according to the World Bank.

The gap between tax revenues and government liabilities is at risk of widening even further if China loses too much low value manufacturing to other countries, whilst not sufficiently growing its presence in higher-value manufacturing and services.

China has for many years been accused of breaching intellectual property right rules. But because of China’s need to escape its middle-income trap, it now has to push even harder to gain overseas technological knowhow.

This pressure is building when, as I said, the US is poised to make China’s access to intellectual property much harder.

In a few days or weeks, the threat of a global trade war may fade into the background again – just as it did in the months immediately after President Trump’s inauguration speech. But the president sincerely believes that protectionism works and has held these views for many years. I thus believe it could well be only be a matter of when not if a global trade war happens.

There is no back to normal

Let’s assume that everything does quieten down again. China is still likely to accelerate its Belt and Road Initiative (BRI) as a hedge against the risk that President Trump does end up triggering a trade war.

This will involve China sourcing most of its imports, including petrochemicals, from the countries it regards as its or friends or economic partners. These countries are mainly within the BRI region.

The BRI comprises huge infrastructure investments by China across some 70 countries that account for around 4.4bn people and 40% of global GDP, according to the World Bank. The BRI may also become the world’s biggest-ever free trade zone.

In the end, therefore, the US could find itself economically isolated from China whether or not a trade war actually happens.

The effect on US PE revenues

Let’s think through what could be the financial implications for US P$ industry.

Using an average of ICIS Pricing CFR China commodity grade PE prices during the 12 months from March 2017 until February.

The seven years from 2018 until 2025 are when we expect total US PE export availability to dramatically increase on all of the new capacity additions. In 2018, we expect exports to total 2.8m tonnes. This will reach 7.9m tonnes in 2025.

These end-results are in the chart at beginning of this blog post. US sales amount to $681m tonnes in 2018 and climb steadily as China PE imports increase. In total over the seven years, $6,2bn of revenue is under threat.

These numbers will of course be wrong, but they do give you an idea of the scale of the risk.

No exporter can afford to lose out in the China market because of its outsize role in global PE deficits. In 2018, for example, we estimate that China will account for 52% of the 22.5m tonnes that will be imported by the regions and countries that are in deficit (where consumption exceeds production). Europe will be in distant second place at 19%. This trend isn’t going to change.

US PE exports would very probably not stop overnight, even in the event of a full-scale US-China trade war. The financial damage in the China market would instead gradually build up, forcing US PE producers to either cut back on operating rates or more aggressively sell material in smaller markets such as Europe and Latin America

I must again stress that I am not positioning myself on either side of the debate about President Trump’s approach to international trade.

But there is no doubt that his approach is radically different from the approach of every other president since the Second World War. When something radically different is attempted, nobody can be certain of the outcome. And with great uncertainty always comes extreme downside risks.