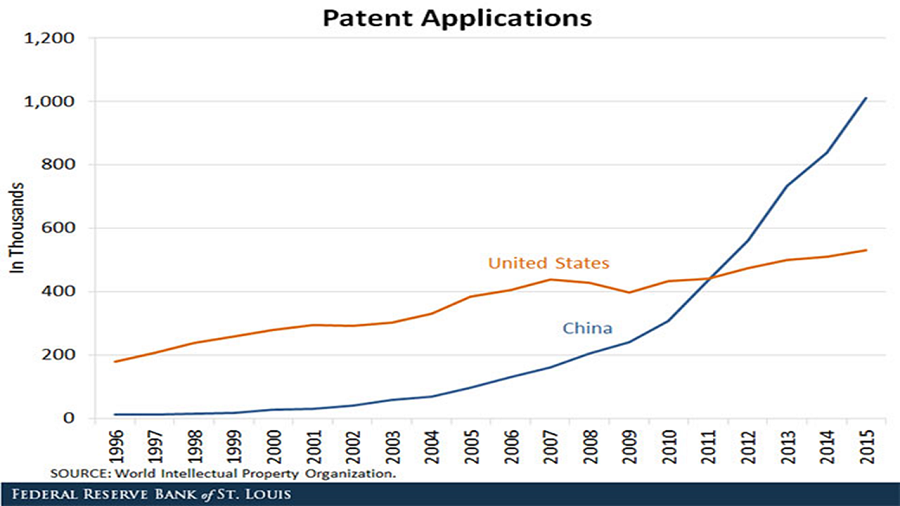 CHINA might still be in a race against time to achieve enough levels of innovation to escape its middle-income trap. This could mean that it has no choice but to reach a deal with the US on trade that gives it continued access to US intellectual property. Such a deal would avert a US-China trade war.

But St Louis Federal Reserve research suggests that China may have already won its race against time. It might thus be able to walk away from the negotiating table .A trade war would then take place.

The St Louis Fed argues that China is catching with the US on innovation:

Meanwhile, as the above chart from the same piece of research illustrates, the number of patents applied for by China now way exceeds the number applied for by the US. True, there are concerns about the quality of some of China’s patents (how many are tweaks of existing technology as opposed to genuine breakthroughs?).

But you next need to consider the extraordinary on-the-ground evidence of just how innovative China’s economy has become. For example, Tencent’s WeChat app has 900m users. Alibaba and Tencent lead the world in online payments, social media and online gaming – way ahead of the US.

As the Fortune article, which I linked to above, also says: Between 2014 and 2016, China attracted $77bn in venture capital investment compared with just $12bn in the preceding two years.

And about a third of the world’s 262 “unicorns” (start-ups valued at more than a billion dollars) hail from China, according to McKinsey & Co., and account for 43% of the global value of such companies.

Also consider how China funds local innovation. Say five local companies want to compete in the 3D printing market. The government, in effect, says to these five companies, “Only one of you is going to win, but we guarantee that the debts of the other four will be written off. And good employees who work for the four losers will be given jobs with the winner”. In other words, you don’t have to gamble your entire future to succeed.

Look at the origins of many of the scientists working for Western companies. They are very often Chinese nationals who work overseas because compensation is better than in China. But for how much longer?

China doesn’t hold all the innovation cards. In some areas of high technology there are gaps that China still has to fill. But will it now want to depend on the US? Might it instead turn to the EU, Japan and South Korea as these regions and countries move closer to China and its Belt and Road Initiative?

And even if China does need continued access to US intellectual property, there is another scenario where it still walks away from the discussions without a deal. This would happen if its politicians are asked to make compromises they view as economically and politically unfeasible. Is today’s White House administration ready to make the concessions that allow China to emerge from the talks looking like a winner?

We are living in very dangerous times

I could be overplaying the risks of a breakdown in trade talks between the US and China and thus the possibilities of global a trade war. If a trade war does happen, you may disagree with my conclusion that a result would be a global recession. Consensus thinking holds that the global economy is strong enough to withstand a breakdown in the US-China trading relationship.

But if your petrochemicals company only plans for the best of possible outcomes, the risks are unacceptably high for employees, shareholders and other stakeholders.

Petrochemicals companies must instead plan for how global demand for and trade flows of petrochemicals and polymers would change in the event of a trade war.

ICIS Consulting is in a strong position to help with this planning, as since last year I have been warning that China could impose import tariffs on US petrochemicals and polymers. Last week saw of course the announcement that these tariffs are on the table.