Success And Failure In Polyolefins Redefined By Sustainability 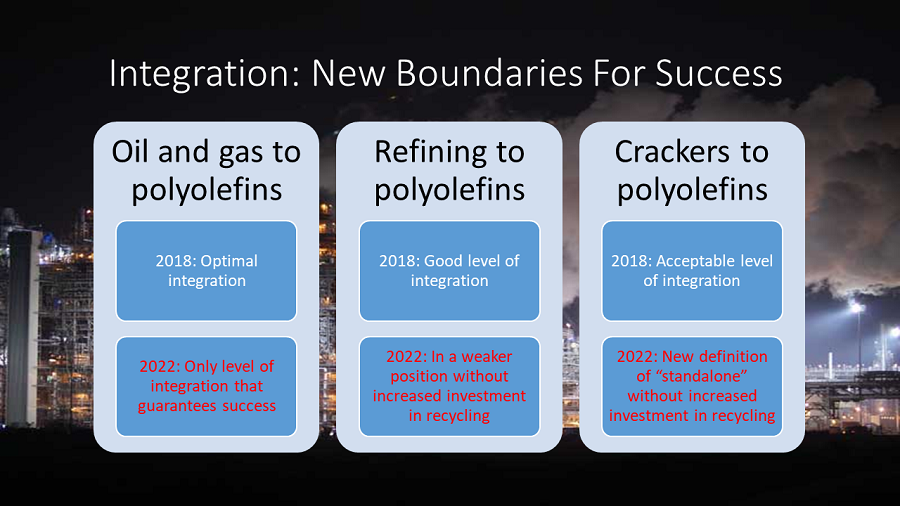 YOU DON’T have to be an oil and gas producer to be successful in polyolefins. Anyone with integration upstream as far as refining is in a strong commercial position.

It is also good enough to be integrated from the steam cracker downwards; in fact, more than good enough given the strength of polyolefins margins over the last few years. And in some cases where good pipeline links exist, it is even possible to make decent money from buying-in olefins to make polyethylene (PE) and polypropylene (PP).

There is a third reason for the transformation summarised in the above chart, and that’s China’s drive towards balanced to long positions in polyolefins and other petrochemicals.

If the world stays as it is, which it won’t, China will be responsible for 46% of total global PE net deficits from 2018 until 2025. In tonnes, this would amount to 92m tonnes of Chinese net imports during these years.

Imagine if China’s net deficits were half this level – a very realistic scenario given the scale of the country’s planned ethylene additions. This would leave everyone outside China competing for what would in effect be a smaller global market.

Returns from these investments should be strong because of the excellent cost positions of the NOCs. But building new steam crackers isn’t just about making money from petrochemicals. It is also about finding a guaranteed home for crude oil reserves as demand for gasoline and diesel falls on the rise of electric vehicles.

This means that even in the worst case scenario where polyolefins margins collapse on oversupply, the NOCs  won’t stop producing polyolefins.

Natural gas-to-polyolefins producers are in a similar position. They are not going to stop making PE if PE margins crater, as pipeline and liquefaction specifications limit the amount of ethane that can be left in methane. Ethane has no other market other than steam cracking, and so it is a case of either flaring the ethane or adding some value downstream

A new definition of standalone

Right now, the term “standalone” carries with it connotations of a very weak competitive position. This refers to the small number of PE and PP producers that not only lack their own crackers, but are also unable to source monomers via domestic pipelines. They instead need to buy ethylene and propylene from overseas suppliers.

It doesn’t have to be like this. There is a way forward for polyolefins players without access to oil and gas. This involves focusing downstream on the recycling industry:

In the innovation adoption lifecycle, the Innovators account for only 2.5% of participants in any market. Next come the 13.5% that comprise Early Adopters. This is followed by the rest – the Early Majority, the Late Majority and the Laggards.

If you want to guarantee success in the polyolefins industry of tomorrow, you have to be both an Innovator and an Early Adopter.