China’s PE market in 2019 at risk of lower growth 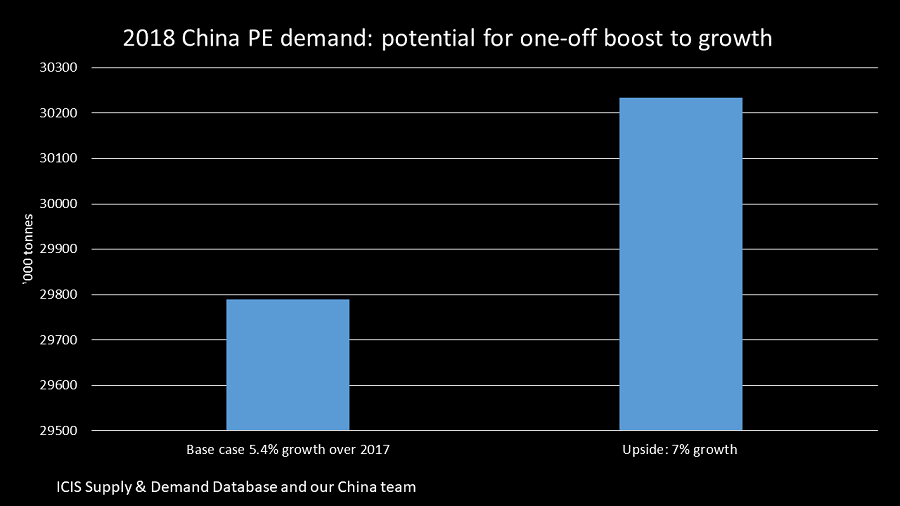 THIS MIGHT turn out to be another good year for Chinese PE demand growth as the preliminary estimate from our China team is that 2018 consumption growth will be 7% compared with last year.

This compares with the forecast in our Supply & Demand database of a 5.4% increase. The above chart shows what the impact would be in terms of additional tonnes of consumption if our revised prediction proves right – 455,000 tonnes.

There appear to be two reasons for why demand growth might end up exceeding our earlier expectations.

One, Chinese government restrictions on imports of recycled PE and cardboard have led to a rise in demand for virgin PE resins.  And two, Chinese consumption of finished goods packaged in or made from PE continues to grow very rapidly.

This is in marked contrast to PP where demand growth might be below the 6% that we have forecast for 2018, as I discussed on Wednesday.

The reasons are that PP goes into far more durable applications than PE – including autos, which is of course a big ticket item. Auto sales have fallen in China for the last three consecutive months.

PP also makes many of the durable goods that are affected by US import tariffs against Chinese plastic products.

My Chinese colleagues also tell me that smaller volumes of scrap PP were imported than PE before the new restrictions were introduced. This means a smaller gain for virgin PP consumption.

What of Chinese PE demand in 2019? It seems likely retail sales growth will slow down for small as well as big ticket items that are packaged in PE. This will be the result of further deleveraging by the Chinese government and an acceleration of the US/China trade war.

The recycling restrictions were also a one-off boost to consumption with limited further benefits in 2019.

The boost from restrictions on recycling

China’s imports of scrap PE plastic were 1.9m tonnes in 2017. In January-March this year they fell to just 2,300 tonnes, according to the latest available China Customs department data.

China has introduced heavy restrictions on imports of scrap or recycled PE and other materials in order to improve the health of workers in the recycling sector, who had previously handled very heavily contaminated imports.  From next year, imports of recycled material will be banned entirely.

Less availability of recycled PE has resulted in more demand for virgin resins.

The restrictions on imported waste also affected cardboard. Because the internet sales companies cannot use cardboard to package goods anymore, they have switched to PE. Expandable LLDPE has in particular benefited from this.

There is therefore a short term link between rising consumer goods sales sold over internet sales and stronger PE demand. But next year, retail sales in general are at risk of decline.

When people eat ice cream this doesn’t make them more attractive as a food source for sharks. It is just that in the summer months people both swim more and consume greater quantities of ice cream because the weather is hot. Just because two events occur at the same time doesn’t mean that one causes the other.

So it seems to be with the long-term connection between mobile internet sales and China’s PE consumption.

China is in some respects the most wired country in the world with parts of Shanghai and other major cities virtually cashless.

Evidence of this comes from the extraordinary growth in internet sales. Online retail sales were at Yuan 4.2 trillion ($6.1bn) in January-August – a 28.6% increase over the same period last year – according to the National Bureau of Statistics.

But talk to retailers and they will tell you that every sale of an item over the internet means one less sale in a traditional bricks-and-mortar shop. The net benefit for PE consumption might as a result be neutral.

Alibaba and Tencent, China’s internet giants, do not have to worry about the design and style of packaging. All that they have to instead do is to make sure that goods are adequately packaged before delivery in order to avoid any damage.

But physical retailers have to attract customers into their stories and get them to spend time browsing the shelves.

Packaging has to thus be very attractive. This requires higher-value grades of PE than you would need for an internet sale – and more PE, as you need multiple layers of film to achieve an attractive design.

The growth of PE demand is instead more reliably linked with the availability of credit and increases in personal wealth.

The word wealth is crucial here. China’s average per capita income in 2017 was just $8,836, according to IMF data. This would be below the breadline by Western standards.

Let’s imagine a China that wasn’t anywhere near as wired as it is today. Consumer spending would have grown at the same rate since 2009 because of the explosion in credit availability and personal wealth, resulting from the huge government economic stimulus package launched in that same year.

The difference is that people would have had to have visited more bricks-and-mortar shops. We might have seen ten or more department store chains emerge as big Sears used to be in the US a decade ago. This week Sears filed for Chapter 11 because of the rise of internet sales.

The chart below mirrors the one I provided you with for PP on Wednesday. It shows the ebbs and flows of credit availability since 2009 and the increase and declines in PE demand growth 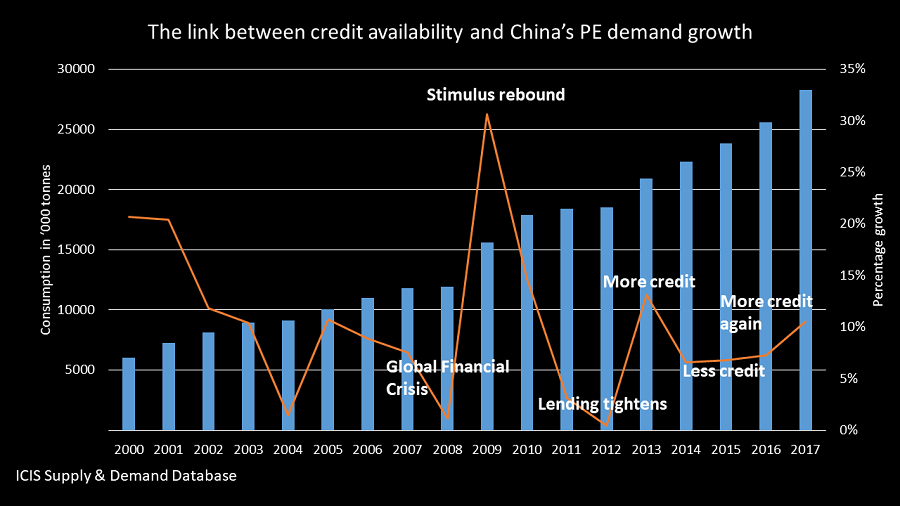 The risk is that if deleveraging continues in 2019, credit availability will decline to the point where it starts to eat into growth in domestic consumption – both for small as well as big ticket items.

The housing market could also suffer a major correction. This is the biggest source of individual wealth in China, with the housing bubble inflated by economic stimulus. If the bubble deflates then of course the losers in the real estate market will spend less money.

An early sign that this might be about to happen was the 27%  year-on-year fall in the sales of floor space during the Golden Week holiday. As developers try to unload property at discounted prices, protests are building from people who paid higher prices for the same condos.

The global petrochemicals business has been rescued by Chinese economy stimulus since 2009. Since that year, Chinese growth in all of the petchems has become more important as a driver of global growth. Meanwhile, growth in other markets has by comparison been anaemic.

Can China come to the rescue of both the petchems industry and the global economy again? Not without adding to already systemic debt risks, according to a new S&P report. The ratings agency warns of a “debt iceberg with titanic credit risks” because of a boom in government infrastructure spending.

Further, the scale and nature of the post-2008 economic stimulus was bad for the environment.

Xi Jinping, China’s president, has staked his political reputation on more sustainable growth, which will inevitably mean less flexibility to build yet more condos and chemicals, steel and aluminium factories.

The debt problem highlighted by the S&P report also suggests that funding infrastructure investments in under-developed western China will be a major challenge.

Local government’s had racked up $4.3 trillion to $5.8 trillion of debts by the end of last year, mainly to pay for infrastructure, said the report. This was equivalent to 60% of China’s GDP.

Further, the trade war seems likely to get worse with significant negative consequences for the Chinese and global economies.

This year may, as I said, turn out to be another good year for PE in China. But you need to be very cautious about next year.