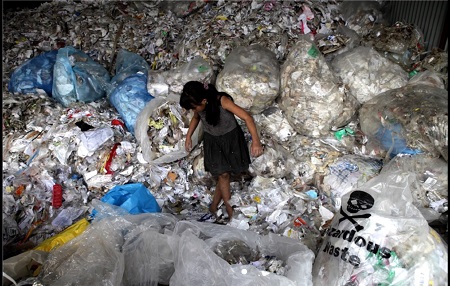 THE DECLINE in China’s imports of scrap or waste plastic and cardboard could boost 2018  virgin polypropylene (PP) consumption in China by some 1% above our base case. Meanwhile, polyethylene (PE) demand may be 2% higher

For details on what this would mean in terms of tonnes, subscribe to our monthly Asia PE and PP Price Forecast Reports, which I author along with my Chinese colleagues.

The direct benefits to PE and PP demand come from greatly reduced availability of scrap plastic for processing into low value finished products. It is only of course low value products that can use recycled material.

We expect scrap PE imports to be no less than 1.8m tonnes lower in 2018 compared with last year. But it is important to bear in mind that because of the very high levels of contamination in scrap plastic, only around 30% of imports end up in finished products. The rest is incinerated or buried in landfills.

There is a major indirect benefit to the polyolefins industry and that’s through the ban on imports of scrap cardboard, which was also included in restrictions on imports of 24 types of waste material that came into effect in China on 1 January.

Lack of availability of scrap cardboard as packaging material has forced Alibaba, JD.com, Tencent and other Chinese internet sales companies to switch to expandable PE (foamed PE made from low-density PE and linear-low density PE) and possibly also expandable PP. Low density versions of expandable PP – which is made from random copolymer PP – can be used for packaging applications.

Risks to our upside forecasts

Our base case assumptions for 2018 PE and PP demand are built on China’s GDP growth increasing by 6.7% during the whole of this year. Q1 official growth is due to be released on Tuesday and is expected be at 6.7% or even higher.

But the credit slowdown continues. Shadow lending in the first quarter versus Q1 2017 was no less than 74% lower. Shadow lending is now back at levels in January 2009, before China’s huge post-Global Financial Crisis economic stimulus package started to take effect.

Total social financing (TSF) on a quarterly basis was also 20% lower. TSF is lending via both the highly speculative, and so very risky, shadow banking system and lending via the state-owned banks.

This underlines my argument that this will be a year when we see significantly lower lending growth as Xi Jinping and China’s other economic reformers accelerate deleveraging.

Whilst Q1 growth will be strong, growth during the rest of the year is likely to fall as deleveraging continues. This could lead to full-year growth being close to or at the government’s target of 6.5%.

If this is the outcome then our base cases for PE and PP consumption will be wrong. Chemicals and polymers demand always grows at multiples over GDP.

This might still mean the restrictions on imports of scrap plastic deliver a 2% boost to PE and 1% to PP. But this would be from lower base case numbers.

If a US-China trade war happens – and I worry that many people are underestimating this risk – China’s 2018 GDP growth may dip below 6.5%.  A trade war would also cause a global recession.

You might have also noticed that I have referred to restrictions on imports of plastic waste rather than the commonly used term “total ban”.

Plastic waste can still move to China legally, provided it has contamination levels at a maximum of 0.5%. This is slightly higher than the previous 0.3% limit originally announced under the new regulations. But it is less than the increase to 1% that exporters had been hoping for.

If oil prices continue on their current geopolitically driven upward trajectory, resulting in of course higher virgin PE and PP prices, then we could see a spike in legal imports of cleaned, sorted and baled scrap resins.

And as Recycling International.com reports, quoting the US Institute of Scrap Recycling Industries:

Chinese companies are investing in the USA in order to work around the import ban by moving secondary recycling processes to the USA and exporting the direct manufacturing inputs to China.

Plastic waste with contamination higher than 0.5% is also being smuggled into China. The risks for the smugglers are great as the campaign against this illegal trade is being led by the newly formed Ecology and Environment Ministry.

The ministry is part of an ever-tougher central government crackdown on pollution in general. The South China Morning post reports that 25 smuggling rings have been “smashed” so far this year, involving 110,000 tonnes of imported waste of all categories.

Billions of dollars of investment in local recycling

As for beyond this year, China plans to invest $31.07bn in household waste treatment as part of its 13th Five-Year-Plan (2016-2020). A lot of this money is being allocated to the upgrading of China’s highly disorganised collection and recycling of locally generated plastic waste.

This shall be the subject of a future post, where I shall examine in detail how a major expansion of China’s local recycling industry will lead to growth in virgin polyolefins consumption being less than many people assume.

PREVIOUS POST Single-Use Plastics: The Good, The Bad And The Ugly
NEXT POST China's 74% Fall In High-Risk Lending Points To New Slowdown