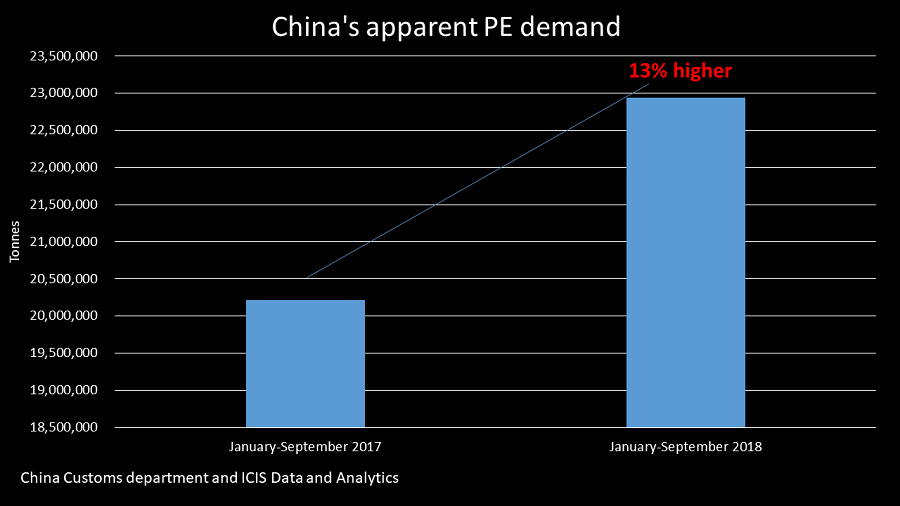 CHINA’S official PE imports and exports are finally out for January-September 2018 after a very long delay. Until a week ago, official data was only available up until March. Reasons for the delayed release are not understood.

What the data show is that on a year-on-year basis, net imports (imports minus exports) increased by no less than 23%.

This is when we expect that real demand for the full year 2018 will increase by around 7% over 2017. Real demand is imports adjusted for inventory distortions.

The phrase “industry distortions” seems to be the key here. It is reasonable to expect an extended period of destocking given also the collapse in oil prices, the slowdown in the Chinese economy on the US/China trade war and the domestic credit squeeze,

Chinese traders and converters may switch to buying “hand to mouth” – just enough material to continue operating – as inventories are worked out of the system.This could mean substantial downward pressure on PE pricing over the next few months.

But you need to be aware of an important caveat here.If my upside scenario for oil prices over the next 12 months happens because of the heightened risk of a geopolitical crisis then the opposite could happen – PE prices may rise.

Even if PE inventories remain high in this upside outlook for crude, buying PE ahead of further anticipated rises in the cost of oil could still occur.

But in any of my three scenarios for oil prices that I detailed in my last post, overstocking in PE will surely add to pressure on margins.  My three scenarios are for crude to give up all of its November 2018-October 2019 gains, business as usual with Brent at an average of $72/bbl or prices rising to more than $100/bbl.

What appear to be high inventories have occurred as new US PE supply is about to arrive in the global market. The biggest pressure will be felt in LLDPE where US imports are set to rise from 2.2m tonnes in 2017 to 3.7m tonnes in 2019.

It has nevertheless been a good year for PE demand growth in China. We had expected real demand growth of 5.4% in 2018 over 2017. But, as mentioned above, our China team is now estimating growth of 7%.

This would leave this year’s consumption at around 30m tonnes – some 455,000 tonnes more than we had originally anticipated.

Continued wealth growth has been another big factor behind the upside for PE consumption.

But watch out for next year. The inventory overhang, increasing supply and a global recession could all combine to dampen prospects.

So far, PE demand growth in China has not been damaged by the increasingly negative economic backdrop, as PE is heavily used for packaging of “small ticket” consumer products that don’t cost much – e.g. buying two rather than one bottle of perfume for your girlfriend.

But discretionary spending may take a hit in 2019 as the economic environment worsens.

A sign of things to come could be the results of yesterday’s Alibaba Single’s Day sales promotion event.

Alibaba saw a record 213.5 billion yuan (US$30.70 billion) in sales during the 24-hour events. But percentage year-on-year sales growth was the lowest in the event’s ten-year history.

Earlier this month, Alibaba revised down its sale growth estimate for 2018 by 4-6%. Its share price has dropped by 16% so far this year after more than doubling in 2017.