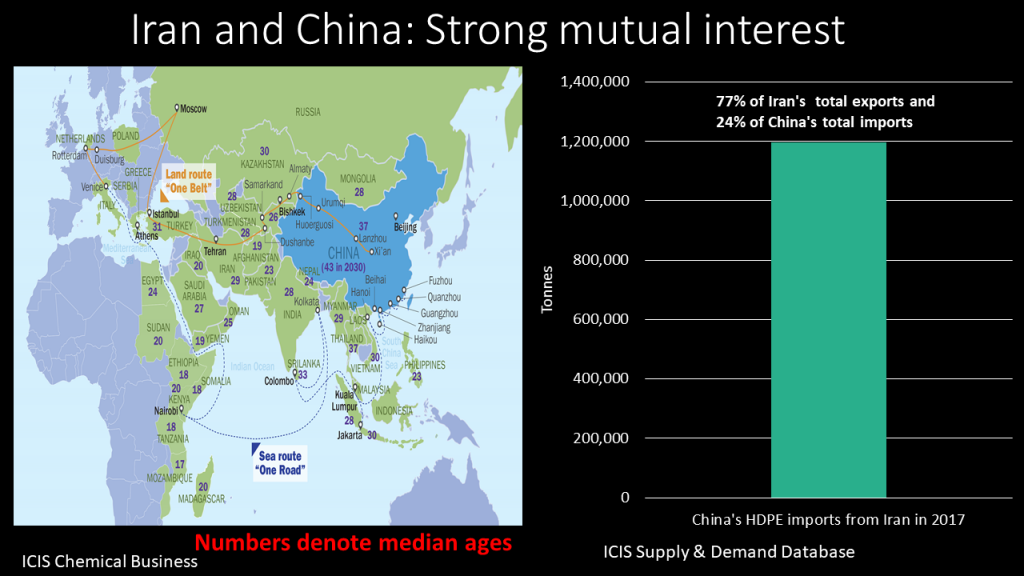 IRANIAN exports of PE to China will likely suffer a temporary decline because of financing and logistics problems resulting from the new US sanctions against Iran.

The US dollar now needs to be entirely avoided with trade needing to migrate to the yuan, the euro and other currencies.

And as my ICIS colleague Angie Li writes, at least one container shipping line may no longer be prepared to ship Iranian resin to China.

But as I’ll discuss in my post next Monday this dip in trade will make little if any difference to an oversupplied Chinese PE market over the next three months.

And I believe that Iran will export more PE to China over the long term as the already strong geopolitical and economic relationships between these two countries strengthen.

Iran and China have a great deal to gain from at least maintaining their PE trade at the recent very high levels.

The pattern is the same in LDPE and LLDPE, although Iran only began exports of LDPE in 2017 shortly after it brought its first plant on-stream.

Leverage in the trade war

China has become very heavily reliant on Iranian PE. In HDPE, for instance, shipments from Iran accounted for less than 1% of its total imports in 2007. But last year this had risen to 24% out of total imports of 6.4m tonnes.

As it tries to beat the US in the trade war/Cold War, China cannot afford to shut the door on such a big import partner.  If it were to bend to US sanctions and stop importing PE from Iran, China would find it much more difficult to boycott US PE cargoes and still satisfy its huge import demand.

China knows that if it can avoid being forced to buy US PE cargoes in 2019, it will be able to exert significant economic pressure on the US. Next year is critical because it marks a big increase in US PE production, with China the only market big enough to comfortably absorb the extra production.

And as the Washington Post argues, the US can only make its Iran strategy work with the cooperation of countries such as China.  Good luck with that. Even in the best of times for US/China relationships, China might have been tempted to thwart US geopolitical ambitions. But these are not the best of times as the two countries head towards a new Cold War with their trade war likely to intensify

Iran-China PE trade is of course only a small part of the picture. A bigger deal is Iranian oil exports to China. China is amongst eight countries given waivers from the sanctions that, in theory, will give it another six months to wind down its imports from Iran.

But will China and the other waiver countries wind down their imports to zero – the target set by the US? Perhaps the US will have to extend the waivers, suggests the Washington post. This would be an obvious big gain for Iran, and a means by which China could undermine the US strategy on Iran.

The famous ability of Chinese traders

Even in the short term, the dip in Iran-China US PE shipments  seems likely to be modest because of the famous ability of Chinese traders to find their away around financing challenges.

With other countries likely to be less willing to buy Iranian PE, Chinese traders will be already well aware that this puts them in a very strong position to achieve some good bargains. This will drive them to find ways around any trade barriers.

What could happen, or may already be happening, in PE markets is reportedly already taking place oil markets. The Washington Post again writes:

Chinese firms have switched to using Iranian tankers to deliver the oil, to side step sanctions and reduce their own risk. Meanwhile, Chinese companies have secured deep discounts on Iranian oil, because Tehran is in a tough spot.

And whilst China’s Bank of Kunlun will stop processing payments to Iran because of the new sanctions, money earned from Iran by exporting to China will be held in a Chinese escrow accounts, adds the Post.

Some of this money will, says the Post, be used to buy Chinese manufactured goods for export back to Iran, This would mean more profits for Chinese traders – and would also further strengthen the Iran-China economic relationship.

Iran, China and the Belt and Road

Iran is part of China’s Belt and Road Initiative (BRI), which, as the slide at the beginning of this blog lost reminds us, is built around demographics.

China can outsource its manufacturing to countries with youthful populations such as Iran and in so doing maintain ownership of lower-value manufacturing such as textiles and garments. Meanwhile, China, unlike the US, has no hope of becoming energy independent. Iran has big oil and gas reserves that can help meet China’s deficits.

China PE deficits are the biggest in the world. It is also the biggest importer of other petrochemicals including ethylene glycols and styrene. Iran’s oil and gas reserves could be monetised into new petchems capacity with China as a joint venture partner.

The free trade agreements that are an important part of the BRI could further support Iran-China trade.

But balanced against this the importance of China’s relationship with Saudi Arabia, which, as we all know, has a major geopolitical dispute with Iran.

If I had a dollar for every time I’ve heard a conference presentation and read a report that talked about the importance of cost-per-tonne economics, I’d be very rich indeed.

Feedstock advantage isn’t going to go away – although I would content that its nature will undergo a radical change as a result of sustainability pressures.

What is also changing everything is the new geopolitical world in which we live. Two global trading blocs are set to form – one led by the US and the other by China – with limited petrochemicals trade flows between the blocs.

What countries will form these blocs we have as yet no idea – and even when the blocs are established, countries may change sides.

China, though, as we have discussed in the case of Iran, is in a strong position to attract most of the developing countries into its orbit.