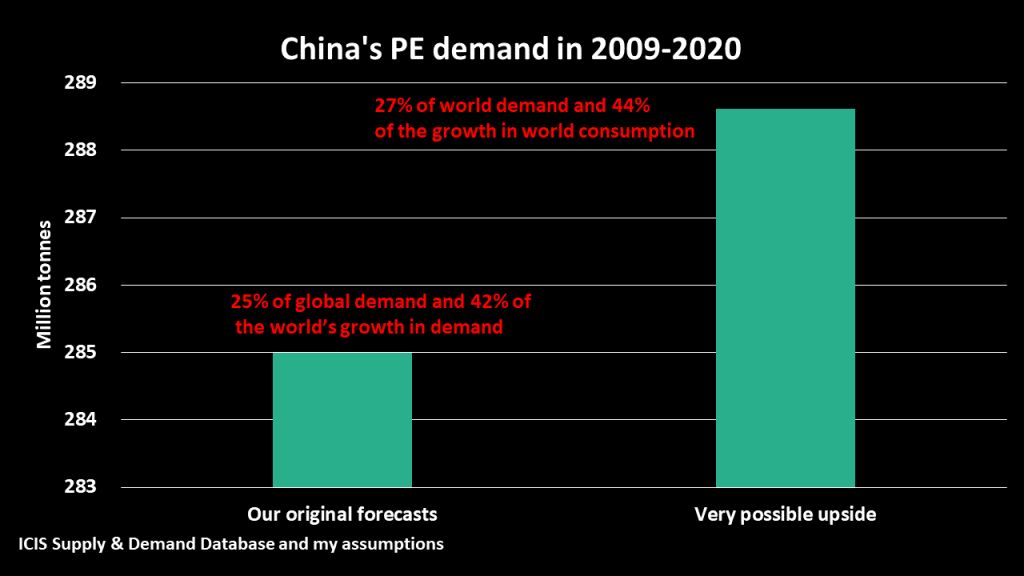 WE WERE already living in an incredibly lopsided PE world even before last year’s extraordinary rise in Chinese demand.

What has made the world even more lopsided is 2018 Chinese apparent demand growth of 12% over the previous year (apparent demand is net imports plus local production).

Last month I had estimated that this would to lead to real demand growth of 7% when adjustments had been made for lower-than-expected local production and a large inventory overhang. But even this 7% growth would have still delivered 455,000 tonnes more Chinese demand than we had expected, as our original forecast for real 2018 demand growth was only 5.4%

Think again. Several leading PE producers  have since told me that real Chinese demand increased by around 9% in 2018 (one producer put the exact number as 9.2%). Let’s assume 9.2% is right for argument’s sake. This would deliver 1.066m tonnes more demand in 2018 than we had originally expected.

Let’s assume that growth moderates a lot in 2019 to just 4% from last year’s 9.2%. I think this is reasonable as the one-off benefit to demand from the heavy restrictions on recycled PE imports has already been built into the existing market. The Chinese economy will also continue to decelerate.

But our original growth estimate of 5% for 2020 feels a little low because of China’s long track record of surprising on the upside. Set let’s raise this to 6.5%.

The end-results are as follows:

These revised estimates assume the rest of the world is  unchanged from our original forecasts with one important exception: The slowdown in the Turkish economy has led me to subtract 1.1m tonnes from our original estimate for the country’s PE demand in 2018-2020.

There will only ever be one China

Whether it is smartphones, autos, PE or any other chemicals and polymers no market has come anywhere close to being as important as China over the last decade.

Will this change? No, it is statistically inconceivable that any other developing market can catch up with China during at least the next ten years.

India will continue to see percentage growth rates higher than China. But because existing volumes are so low in India compared with China, the Indian market when measured in tonnes will remain a small fraction of China.

And when you add together demand in the Asia & Pacific region, which includes India, South & Central America and Africa, demand will remain less than that of China on its own. In 2020, for example, I estimate total consumption for all of these regions at 32.4m tonnes  compared with China as 34.1m tonnes.

As for the developed markets, demand will remain pretty much where it is today. It might edge up a few percentage points or could even decline because of sustainability issues. Let’s look at one developed market, North America, and detail how it has already lost ground versus China:

Your relationship with China is as a result critical

A lot could go wrong with the Chinese economy and my forecasts for PE demand growth, as I shall detail in later posts. Its demographic challenges are, for example, huge and may eat into PE consumption in ways that I have yet to estimate, even from as early as this year.

But if China loses nobody else is going to win. If the Chinese economy were to see sharply lower growth, everybody else would suffer. This is much more the case than before 2009. Over the last ten years, China has surpassed the US and the EU combined to become the main driver of the global economy.

We should all therefore hope that China continues to prosper. But here is a challenge for you: Will it be able to prosper if the US sticks with its current adversarial approach towards China, both in economics and geopolitics?

The other obvious conclusion from all of this data is that China will remember its friends – i.e. those countries that support its efforts to escape its middle-income trap. If you operate PE capacity in a country that has fallen out of favour with China, you might find yourself in a lot of trouble.

PREVIOUS POST US PE margins have further to fall on higher production, China weakness
NEXT POST China's fall in births and economic decline may be impossible to fix