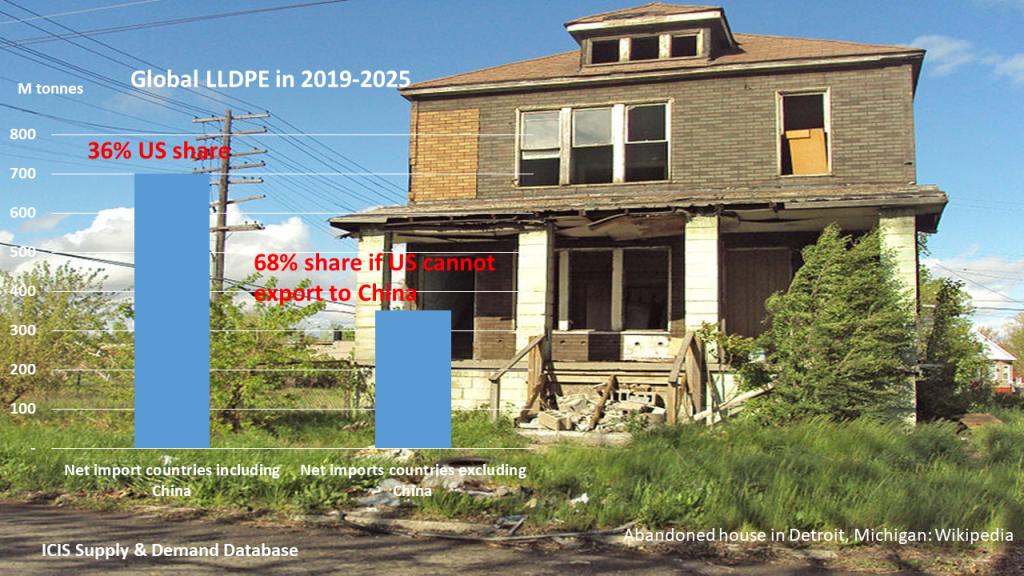 A GOOD WAY of deciding whether or not the likely US/China trade deal will hold is to take a close look at the demographics in 15 potential battleground states in the 2020 presidential election.

As of 2016, just ahead of the last presidential poll, David Wasserman of the Cook Political Report estimated that the proportion of non-college-educated white voters would be 35% or more in the following eight of the 15 battleground states: Arizona, Iowa, Michigan, Minnesota, Missouri, New Hampshire, Ohio, and Wisconsin. This left the remaining seven battleground states with non-college-educated white voters at less than 35%.

Such fine margins look set to be critical in 2020 because of the deeply entrenched political positions of most Americans.

If Hillary Clinton had won Michigan, Pennsylvania and either Iowa or Wisconsin, she would have won the Electoral College. But she instead of course lost Iowa, Michigan, Pennsylvania and Wisconsin in 2016 and President Trump became president. Right now, President Trump’s disapproval versus approval ratings are better in Iowa and Wisconsin than nationwide. He will obviously be eager to at least maintain these positions.

On a national level, President Trump in 2016 won the white working class vote with no college degree by 66% to 29%, according to CNN exit polls. This grew to 71% to 23% amongst non-college-educated white men. These were substantially better results than the two previous Republican candidates. President Trump will want to do at least as well in 2020.

A sense of lost opportunities

The next Democratic presidential candidate will find it very difficult to carve a path to victory without gaining ground in the battleground states.

The battleground is home to America’s Rust Belt. China’s economic rise is said to be the main cause of the loss of traditional manufacturing jobs in the Rust Belt. These states are also where personal wealth suffered heavily during the Global Financial Crisis.. This has led to broad and deep feelings of disillusionment, according to sociologist Robert Francis of John Hopkins University in Baltimore.

Populist politics have a strong appeal in the battleground, both from the right and left, because they offer solutions that are easy to articulate but difficult to implement. This explains why the president’s “Make America Great Again” message resonated so well.

Mind the Gap: It is still big

A US/China trade deal now looks highly likely, probably not by the 1 March deadline but shortly afterwards. President Trump’s decision to delay raising tariffs on Chinese imports from 10% to 25% is a sign of things going well.

“In the weekend talks, Beijing offered to increase purchases of US farm and energy products and services, ease restrictions on US firms in financial services and auto manufacturing and improve protection of US intellectual-property rights, according to people briefed on the discussions,” writes the Wall Street Journal.

But where progress has not being made is on US demands that China abandon its state-led economic growth model.

China is in a race against time to escape its middle-income trap because of a rapidly ageing population. In theory, yes, in the perfect world China might have been willing to become free market economy. But the One Child Policy means we are not living in a perfect world. China cannot risk the unpredictable ebb and flow of free market financing to the higher value manufacturing sectors it must succeed in.

Divisions remain on tackling US complaints that American companies have to share technologies when establishing JVs in China. Chinese officials say this is a fair swap: China gets technologies in exchange for giving access to the world’s most important market.

And even on the progress that has been made, the New York Times argues that if China were to follow through on its promise to buy huge additional amounts of US exports, including $200bn of semiconductors, this would require more state interference. The purchases would undermine long-running efforts by the IMF and the WTO to make the Chinese economy more market-oriented.

As a condition of buying all these semiconductors, China has asked that finishing and testing facilities be moved to China from other countries such as Vietnam and Malaysia. This could give China more access to US semiconductor knowhow and increase disagreements over intellectual property rights.

How would a trade deal be enforced? The US has for years complained about poor enforcement by China of agreements on intellectual property. This has led the US to insist on “snapback” conditions – the ability to re-impose tariffs if the US decides that China has breached new rules. China wants enforcement to be conducted by both sides.

Chinese negotiators cannot give too much ground because of nationalist pressures at home and the weight of history. If too many concessions were made, parallels could be drawn to the “21 Demands” Japan made of China shortly after the First World War. The Demands were rejected because they would have greatly extended Japan’s control over the Chinese economy. Chinese public anger was so strong that purchases of Japanese goods fell by 40%.

The US and China know that as global economic growth slows they need to reach some kind of a deal – and as quickly as possible. Any deal must surely therefore be paper thin with the big differences left unresolved. The details of the deal might even increase tensions between the US and China for the reasons I’ve just explained.

Next year’s presidential election cycle kicks off, as always, with the Iowa caucuses in February – one of the eight key battleground states that have high percentages of white non-college educated voters.

If a trade deal is viewed on both the extreme right and left of American politics as disappointing, expect the anti-China rhetoric to increase from Iowa onwards in an effort to pick up key swing white working class votes. More importantly, President Trump has the executive authority to resume the trade war if he sees his popularity slipping with his core followers.

A resumed US/China trade war would obviously be bad news for the global economy. Specifically for the petrochemicals business, the chart at the beginning of this blog post is a reminder of what is at stake for US LLDPE producers.  Absent the US ability to export to China and the rise in US production we are forecasting for 2019-2025, US LLDPE exports would overwhelm the remaining global net import countries and regions.

Everything may instead turn out alright in the end. But in a world of rising political risk benign outcomes seem increasingly unlikely.

PREVIOUS POST China's fall in births and economic decline may be impossible to fix
NEXT POST Surge in China lending could lead to global economic rebound, stronger chemicals demand