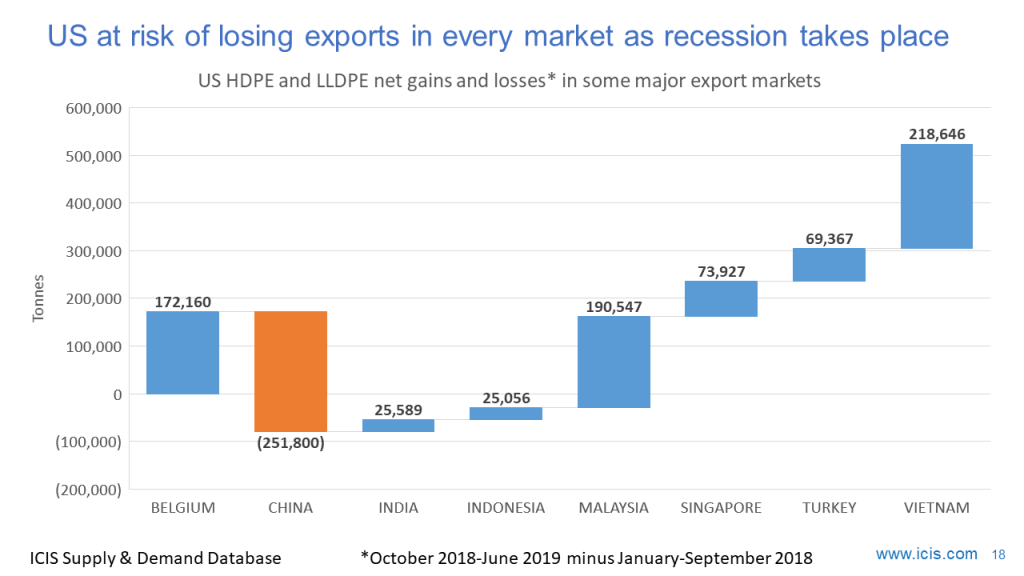 DON’T SAY I didn’t tell you. As I predicted, China has levied trade-war tariffs on US LDPE as the long term US and China battles over trade, technology and geopolitics intensify. US LDPE imports will be subject to 10% tariffs from 15 December.

The 25% tariffs that China imposed on US HDPE and LLDPE from last August will also be increased by a further 5% from 1 September.

But it won’t stop here. As the US/China schism widens, it seems highly likely that China customs officials will take longer to handle whatever US PE imports manage to arrive in China over the top of these new trade barriers. China PE buyers may even avoid US PE cargoes for patriotic reasons.

In the first half of this year, the US PE industry very successfully compensated for the fall in its HDPE and LLDPE exports to China by raising exports to other destinations such as Europe, Turkey, and most dramatically of all, Vietnam.

This rebalancing was made possible by a healthy global economy. From now on this won’t be as easy as the US and China disputes look likely to cause a global recession. The US’s very confrontational approach towards China is pushing us towards a recession because China has been the biggest source of global economic growth since 2008. Attack China and you in effect attack the global economy.

Can the two sides step back from the brink? Trump has to appeal to his base in order to try and win re-election in 2020.

The economy is of course is his trump card if you can excuse the pun. But it would be very difficult for Trump to step back from the core US demands being made of China in the trade war.

One of the core US demands is China ends state subsidies for manufacturing. The US has to drop this condition on a trade deal because, without state subsidies, China would be unable to escape its middle-income trap and that would mean economic stagnation.

But Trump would face a hostile reaction from Republicans as well as Democrats if he were to back away from the state subsidies issue and also tangible, measurable ways in which China would agree to improve its intellectual property rights protection.

From the Chinese perspective, China has lost huge amounts of face in previous rounds of negotiations. Ill will between the two sides needs to be considered.

Whilst President Xi of course has no elections to worry about, he still has to worry about popular opinion. If he were to back down then popular support for his China Dream strategy would be in jeopardy. The way that the US has dealt with China has also stirred strong nationalist sentiment, making it even harder for Xi to back away from his positions.

The chances of lasting deal between the US and China have thus become vanishingly slim.