The opinions in this blog post are, as always, my own and do not reflect the views of ICIS 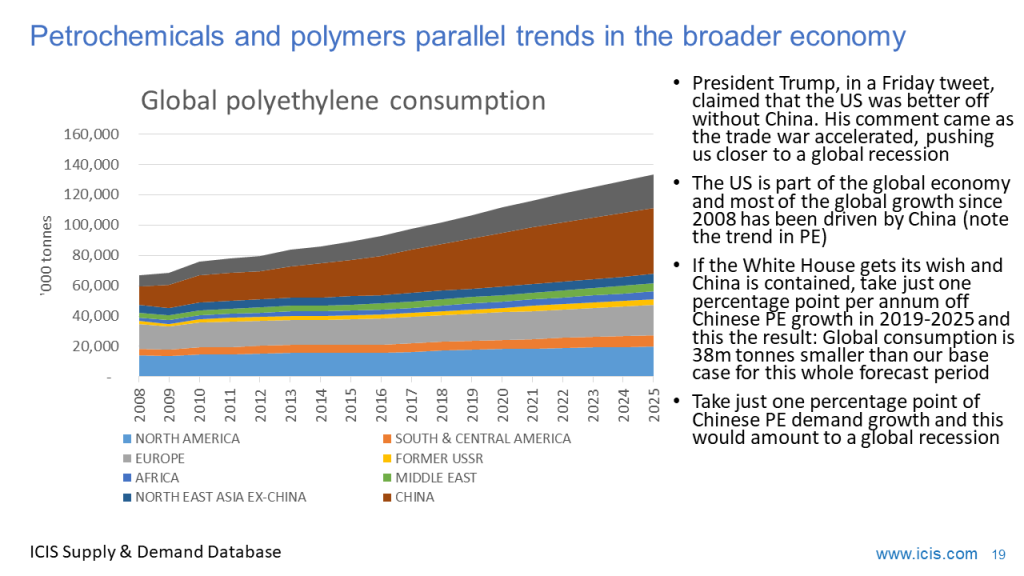 DONALD TRUMP insisted in a tweet last Friday that the US economy didn’t need China, “and frankly we would be better off without them.” He called on US companies to pull out of China and bring jobs back to the US.

His comments came after China’s decision to impose $75bn of additional tariffs on US goods, including new tariffs on US exports of chemicals and polymers. The US responded with yet another tranche of US tariffs on Chinese imports.

In reality, of course, US companies do need China, as do companies around the world. All the data I have seen show that from oil and gas to petrochemicals, polymers and finished goods, China plays a huge role in driving global demand, bigger than any other country or region.

During the same period growth across all the other countries and regions has been completely overshadowed by China.

Petrochemicals and polymers serve as a good proxy for trends in finished-goods manufacturing because they are used to package or make finished goods. The patterns in PE are therefore similar in autos, washing machine, refrigerators, TVs and smartphones etc.

The White House should be careful what it wishes for

If you need further evidence that Trump is wrong then turn to Myron Brilliance, executive vice-president for international affairs at the US Chamber of Commerce, who said in response to the President’s tweet, “President Trump may be frustrated with China, but the answer isn’t for US companies to ignore a market with 1.4bn customers. Escalating tensions are not good for market stability, investor confidence or American jobs.”

Now take a look at the same chart again and the brown bar in the middle representing China. The brown bar gets fatter until 2025. By that year, China will account for 33% of global PE demand.

We can see no other country or region taking on the role of China. India isn’t going to break out and become a major manufacturer of finished goods to rival China. Neither will it be as successful in wealth growth and poverty alleviation. The rest of the developing world will remain a small part of the total. Meanwhile, PE demand in the West will continue to only edge up.

Let’s assume that President Trump and his China hawks are granted their wish and China’s role in the world economy is diminished, cementing the US position as the No1 economic and geopolitical superpower. This is assuming that the US and China don’t end up at war.

Take just an average one percentage point off our base case forecast for annual Chinese PE demand growth between 2019 and 2025 and this comes p 12.3m tonnes less consumption than we have predicted.

Total lost demand in the rest of the world in 2019-2025 would be 25.6 tonnes. Add lost China demand to this number and the loss in global PE demand amounts to around 38m tonnes.

Lower-than-expected growth in consumption would occur across all the petrochemicals and polymers and downstream into a wide array of finished goods. The global economy would end up smaller in 2025 than most people assume today.

And in the process, of course, because China is so important to the global economy, we would end up in a global recession. Friday’s events have made a recession more likely over the next few months.

Specifically for the US PE industry, it has already seen its exports to China shrink as a result of the tariffs China has imposed on US HDPE and LLDPE. The tariffs have occurred as the US industry undergoes is biggest-ever capacity expansions. As the trade was is worsening, more restrictions on US PE exports to China, the world’s biggest PE market, seem likely.

Further, if the global economy ends up in recession because of the trade war, US PE producers will find it harder to raise export volumes to other markets as growth shrinks.

The EU and many other countries and regions share the White House’s concerns over China’s handling of intellectual property and state subsidies for manufacturing etc. But this is not the way to handle the issues. The aggressive trade war risks making the world a lot poorer.

PREVIOUS POST How sustainability will upend the petrochemicals cost curve, creating new winners and losers
NEXT POST China imposes trade-war tariffs in US LDPE and raises tariffs on HDPE and LLDPE