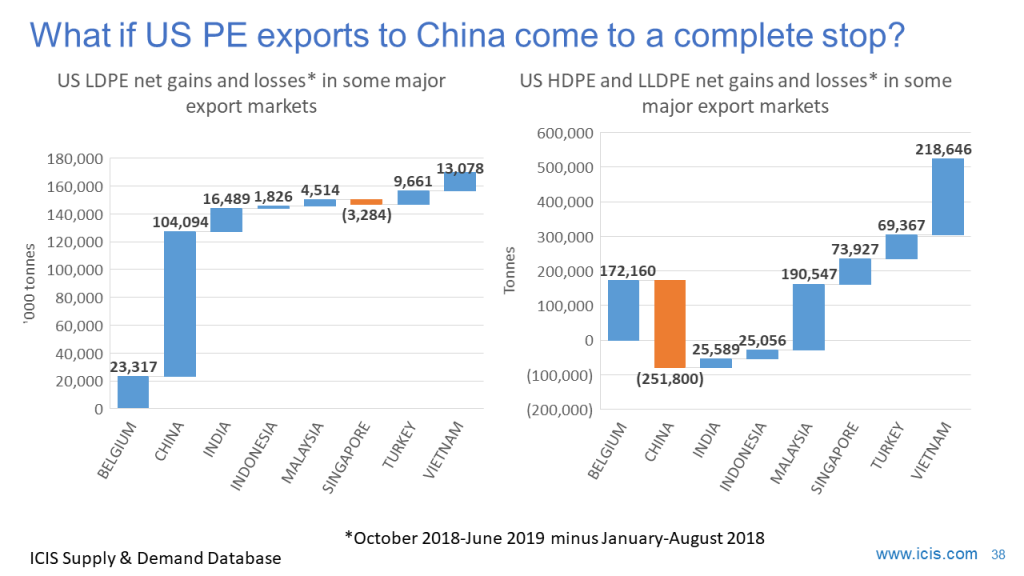 IT IS very likely that China will impose 25% additional imports duties on LDPE in response to the latest US escalation of the trade war, market sources have told me this week. This would add to the 25% duties that have been in place on US HDPE and LLDPE cargoes since August last year.

A problem for the US is that China will account for no less than 70% of total global net LDPE imports in 2019-2020, according to our forecasts. This is amongst the countries and regions in net import positions (where imports exceed exports).

This makes the global LDPE import market even more skewed towards China than HDPE and LLDPE because of the different position of Europe. In LDPE, Europe is in a net export position whereas it is a major net importer in HDPE and LLDPE.  In 2019-2020, China is, on the same basis as above, forecast to account for 65% of global net HDPE imports and 58% of net LLDPE imports.

If 25% duties are imposed on US LDPE this will leave the US with limited ability to divert cargoes from the China market. So far, as the chart above illustrates, the US has been very successful in diverting HDPE and LLDPE from China to other markets. This is when you compare the nine months from October-2018 until June 2019 with the January-September 2018 nine-month period (before and after the tariffs started to have a major effect).

As you can also see in the same chart, US LDPE shipments to China increased by a net 104,094 tonnes. The US percentage share of the China market rose from 5% to 8%.

You can argue that because the US has become a key LDPE supplier, China will back away from duties. I don’t think so. You must not underestimate the depth of anger and the loss of face amongst Chinese government officials as a result of US actions in the trade war. This suggests to me that China will introduce measures that may not always be in its best term economic interests.

Or the loss of US supply might not be that much of a deal given that the US is still not the biggest supplier of LDPE to China. That title went to Iran in October 2018-June 2019 with a 21% share followed by Saudi Arabia at 15%. It would be logical for China to secure more imports from these countries as it tries to draw them closer economically and geopolitically. We are moving ever-more quickly towards a bipolar world.

“But, surely, anyway, even if China does impose the 25% duties, US LDPE cargoes will still move to China? We’ve seen this in HDPE and LLDPE where US shipments have fallen, but have still continued, despite the duties,” you might say.

Here’s the thing, though: The extent of anger towards the US, along with limited options to target US imports because of the China trade surplus with the US, could lead to all US PE shipments coming to a complete halt.

Let’s assume the economic damage from completely stopping US PE imports would be so big that it would give China pause for thought. They may still pull up the drawbridge because this week’s events have convinced Beijing that this is a very long term battle against the US. In the typical Chinese way, success will not be measured in months, but in years and decades.

Without any access to the China market, US LDPE producers would be in a very difficult position as their total exports – based on the January-June 2019 data are on course to rise to 1.3m tonnes in for the full year 2019 compared with 942,995 tonnes in 2018. This would be an all-time high.

Global recession may have already begun

As I said earlier, the data so far show that US HDPE and LLDPE exporters have been very successful in shifting export volumes from China to other markets. This is thanks to a strong global economy.

Probably not for much longer, according to the latest Reuters column by John Kemp. He writes: “The global economy is probably in recession, with most cyclical indicators showing business activity is flat or falling.

If Kemp is right, and I believe he is, what next for the US and global PE industries? As I’ve discussed before, this may be the outcome:

Today’s political mood is very changeable. The US and China may reach a trade deal thanks to a softening of the US position. But right now, this seems very unlikely. Your base case should as a result be planning for a global recession.