This blog expresses my opinions and not those of ICIS 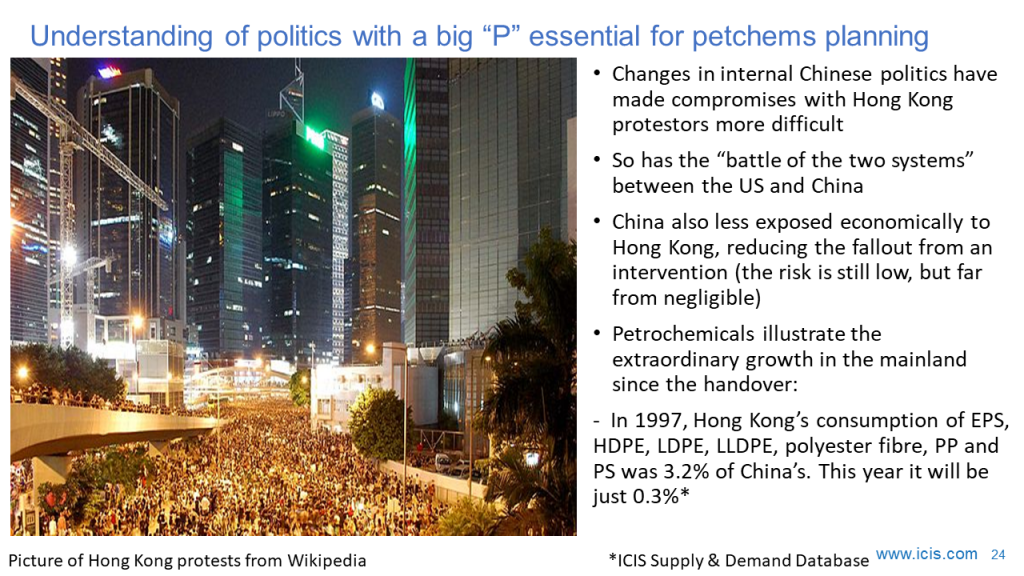 THE UNREST in Hong Kong worsened over the weekend. Protestors were pepper-sprayed, rubber bullets were used and travellers on the Hong Kong underground were filmed being beaten by the police. Petrol bombs were thrown by demonstrators.

This morning Hong Kong’s airport was once again disrupted as roads gridlocked by demonstrators left passengers stranded at the airport’s terminals. The underground was also disrupted.

In a different set of economic political circumstances in China, the extradition bill which triggered the protests might not have been introduced.

And in a different set of local and global political circumstances, the chances of China intervening directly in Hong Kong could be lower than they are today.

None of what follows comments on the rights or wrongs of the protests and the response of the police force. That’s not my job here. It is instead to use Hong Kong as an example of the changed global political context in which the petrochemicals industry operates. Politics with a big “P” should drive your planning.

Specifically on Hong Kong, you should plan for the economic fallout of direct intervention by China. Intervention still feels to me at this stage unlikely. But the risk is far from negligible.

If there had been a Global Financial Crisis, China would probably hold a different view about the value of the Western economic model.

“Opinions were shifting towards making the Chinese economy more open, more Western, but that changed with the advent of the crisis,” said a source.

“After 2008, sighs of relief went round senior Chinese politicians that they had ignored the advice of the West to open their capital markets. If Chinese markets had been open, capital would have poured out of China, making the impact on China of the crisis far greater”, he added.

Opinions began to firm over the superiority of the Chinese system because of the role that state-led capitalism played in mitigating the impact of the crisis.

As an aside, we should all be grateful, regardless of our political views, that China was able to pour so much money into its economy in 2009-2017 because of its political system. Its economic stimulus rescued the global economy and the global petrochemicals industry. Yes, it has left major imbalances. But a lot of people have made a lot of money, thanks to China’s actions.

Then came the accession to power of President Xi in 2012 and his “China Dream” policy, centred on which are the re-legitimisation of the Communist Party, the promotion of the state-led Chinese economic growth model and national pride. Here are the four elements of the policy:

China used to think that the US and Chinese systems could sit side by side, that they could co-exist. It saw no danger of a repeat of the clash of economic and political philosophies which led to the Cold War between the West and the Soviet Union.

Even after the election of President Trump, China was of the view that Trump’s anti-China words were just rhetoric for winning an election and he wouldn’t follow through.

This changed last summer, when the trade war intensified, and last November, when a new US National Security strategy for the first time since the early 1970s classified China as an adversary rather than a partner.

What must also be noted about the strategy is that it received bipartisan support. Both Republicans and Democrats were in agreement. Also, all but Joe Biden of the Democratic candidates for the party’s next presidential nomination support Trump on his approach to China and trade.

China now sees itself as being in a battle with the US over economic and political systems, very similar in this respect to the Cold War of the 1960s-1980s.

Can it afford, in this context, to let the Hong Kong protestors win by conceding to their demands? I believe not. China needs to demonstrate the superiority of its system of Western liberal democracy if it is going to win its battle with the US in today’s bipolar world.

Unless China concedes to the demands of the protestors, there is a scenario where the violence gets worse and China has to step in.

The economic role of Hong Kong versus China

The South China Morning Post writes that the role of Hong Kong as a financial intermediary between China and the West “may be gradually slipping away” thanks to the growth of Shanghai and Shenzhen.

Petrochemicals and polymers are crucial building blocks in so many manufacturing chains. They thus act as a good proxy for trends in broader economies:

In other words, the economic damage of China intervening in Hong Kong would be far less than 22 years ago.

This doesn’t mean to say that the shock of a Chinese intervention wouldn’t have severe short term economic consequences. It would make the global recession deeper and longer because of the effect on stock markets, commodity prices and sentiment at a time when strains are already being felt because of the trade war.

The good old days were ones of favourable demographics and political harmony (the one beget the other). Growth was constant, barring a few minor recessions and one major one – the Global Financial Crisis. Petrochemicals markets were becoming ever-more open as international trade liberalised.

Today, growth is not as consistent and strong because of the rise of populist politics, the rise of China, the US/China clash and the fragmentation of global markets.

Politics are also shaping the sustainability issue as popular opinion drives legislation. This is eroding demand for synthetic polymers.

You can disagree on my interpretations of politics – and, in fact, you should do in order to build different scenarios. But you must not disagree on placing political risk at the very heart of your analysis. If you fail to do this, you will lose an awful lot of money.

PREVIOUS POST China imposes trade-war tariffs in US LDPE and raises tariffs on HDPE and LLDPE
NEXT POST China economic stimulus and PP: How global demand could have been 71m tonnes smaller