Global PP demand could be 81.5m tonnes less than forecast in 2019-2028 as China Debt Supercycle ends 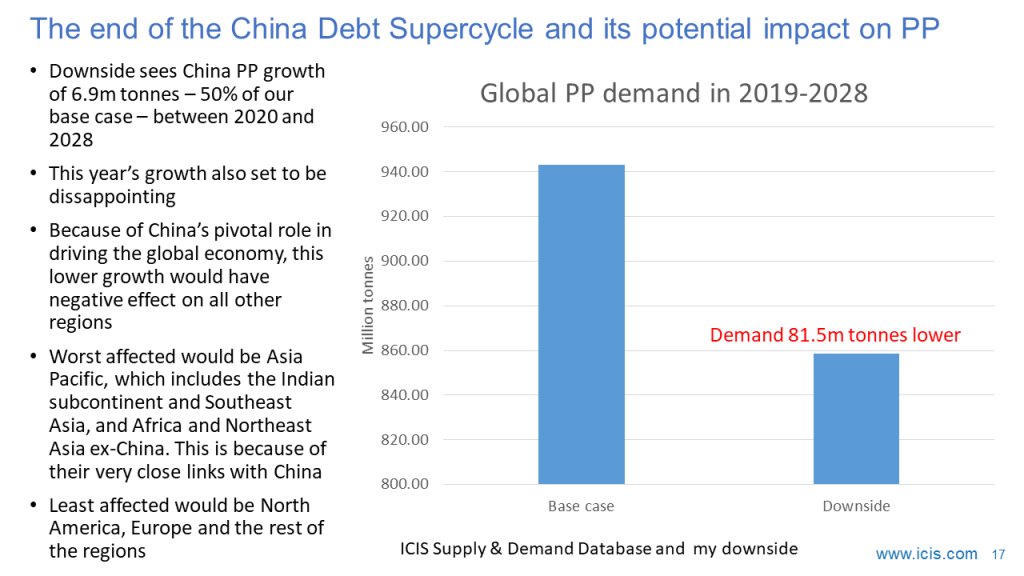 SOME PEOPLE argue that despite the rapid rise in Chinese consumer debt over the last few years, there is nothing to worry about because consumer debt as a percentage of GDP China still lags behind Western countries.

This misses the point and is an example of the dangerous “all is right with the world” thinking that will cause a great many problems for petrochemicals companies. As The Wall Street Journal points out, China’s consumer debt as a percentage of average household income surpassed that of the US in 2017 and has, quite literally, skyrocketed since then. This is no hyperbole. It is based on the data.

The critical point here is the affordability of debt rather than its overall percentage against GDP. China remains a poorer a country than the US in terms of incomes. We should as a result question whether China can afford to meet the consumer debts it has incurred. We must also question the extent to which the government can allow the consumer lending build-up to continue.

The overall debt problem has been in two phases. First came the rise in corporate debt immediately following the Global Financial Crisis. China’s giant economic stimulus package, designed to mitigate the impact of the crisis, led to petrochemicals and other plants being built for the sake of the economic activity generated by the construction work. Long term supply and demand fundamentals were overlooked.

Next came the increase in consumer debt. Take a close look at the same Wall Street Journal article where you will see some quite extraordinary evidence of the consumer debt problem, which is largely centred on young people born after 1990.

Mortgage debt outstanding grew from $1.1 trillion in the fourth quarter of 2012 to $3.9 trillion as of June. Mortgages accounted for about a third of China’s medium- to long-term loans, up from 20% in 2012, according to the People’s Bank of China.

Parents often help young Chinese to buy a home with multiple generations now required to afford a single property. A similar phenomenon occurred in Japan in the 1980s before its real estate bubble burst.

Nearly a third of the young people who took part in a 2018 survey had taken out more short term loans to service existing debt. Half had missed debt repayments. The average consumer spending of Chinese credit-card holders between ages 21 and 30 in 2016 was 39% higher than their average credit line.

Running right through China’s Debt Supercycle has been infrastructure spending. But some provincial governments are running out of bridges, roads and railways to build because the more developed provinces of China have become saturated in infrastructure. Another problem is a change in infrastructure financing rules. Projects have to be profitable by themselves whereas before, loss-making projects could be paid for by other sources of local government revenue.

In H1 2019, nationwide infrastructure spending was down on the first half of last year. As with the growth in consumer spending, we have gone beyond the peak in infrastructure investment.

This makes a nonsense of the commonly expressed view that the petrochemical growth rates we saw during China’s Debt Supercycle will continue. The Supercycle ran from 2009 until 2018. During these ten years, China’s PP demand increased by 14.4m tonnes – 222% more than the previous ten years.

This will matter hugely for the global economy and the global petrochemicals because China has essentially carried both since the Global Financial Crisis.

China is not only contending with the challenges of a post peak-stimulus economy. A further negative for growth, however long it lasts, is the trade war. China’s ageing population is another huge challenge. I believe China will succeed in escaping its middle-income trap, which is a product of its ageing population.  But in the interim this will act as another drag on growth.

This year’s petrochemicals data show we have entered a new era during which Chinese growth rates will consistently undershoot overoptimistic forecasts.  This applies across a range of petrochemicals and polymers.

Sticking with PP as an example, China’s apparent demand growth in January-July 2019 compared with the same seven months of last year was 4.3%. Apparent demand is our estimates of local production, both granular and powdered PP, plus net imports – i.e. imports minus exports.

Growth of 4.3% is still exceptionally healthy by the standards of most of other countries, but not China where expectations are too high.

Our base case for 2019 sees annual demand growth of 5.7%. Assuming that 4.3% is instead the rate of full-year growth, this would result in demand being 838,518 tonnes lower than our forecast. By the end of this year, the size of the China market would be around 28.2m tonnes rather than our forecast of roughly 29m tonnes.

What about whole of the ten years from 2019 until 2028? Using a similar methodology from my alternative history of 2009-2018 in Wednesday’s post, let’s first consider this year. If the China market ends up at 28.2m tonnes this would be 97% of the demand we had expected.

We forecast China’s consumption growth at 12.2m tonnes between 2020 and 2028. Let’s for the sake of argument halve this growth and divide by nine to give annual average demand growth of 680,000 tonnes. This results in a steady decline in downside growth as a percentage of our base case. The alternative downside sees demand falling to just 80% of the base case in 2028.

Extreme? Perhaps. But maybe this only because we’ve got so used to a Chinese market  where growth hasn’t been constrained by debt and demographic issues.

What might this mean for the rest of the world? In North America (the US, Canada and Mexico), South & Central America, the Former USSR and the Middle East I assume PP demand growth will by one-third of the drop in Chinese growth versus our base case in 2019-2028. This reflects China driving some one-third of global economic growth in 2009-2018.

In Asia & Pacific, Africa, Northeast Asia ex-China (South Korea, Japan and Chinese Taiwan) and Africa I assume a stronger impact because of closer economic links with China. Falls in demand in these regions average 60% of the Chinese total.

The end result you can see in the chart at the beginning of this section. In all the years between 2019 and 2028, global PP demand totals 859m tonnes instead of our base case of 943m tonnes. That’s a loss of 81.5m tonnes of demand versus our base case when you look at the exact numbers.

Even in  my downside scenario, though, Chinese growth would  average a quite healthy 2.4% per year between 2019 and 2028 with 6.9m tonnes of new demand – more new demand than any other country or region in the world.  But this would of course be a long way short of our base 13.9m tonnes and 4.6% per year.