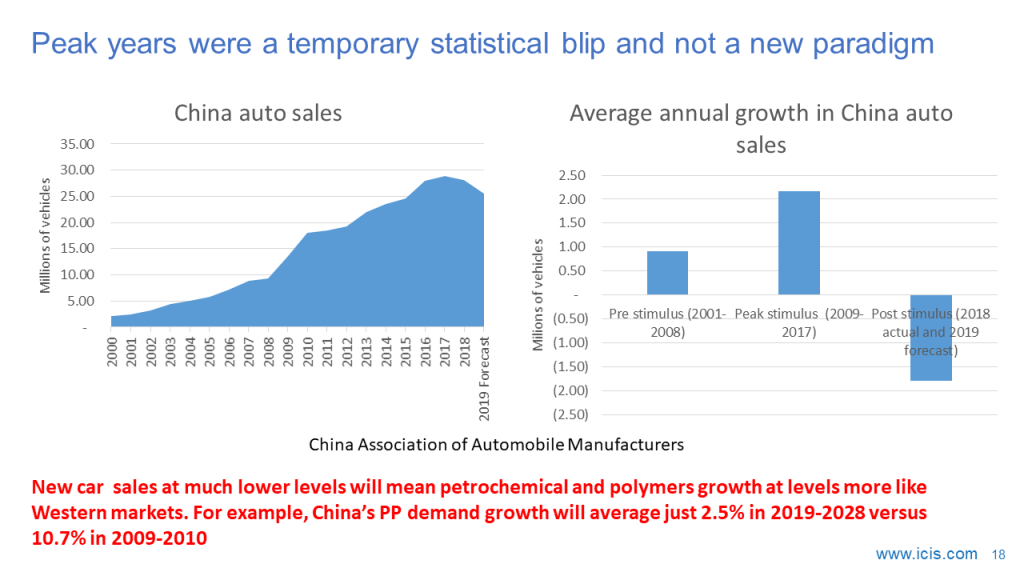 THERE IS a big temptation when making forecasts of becoming too excited about the recent past. Judgements are at risk of being blurred by euphoria, resulting in very bad investment decisions based on the notion that the recent past will reflect the long-term future.

Paradigm shifts do occur from time to time. We have seen one in the big shift in popular opinion against single-use plastics and in favour of the science that demonstrates our behaviour is causing catastrophic climate change.

This change has only occurred over the last few years. But this shift in the public mood is here to stay because it is mainly a generational thing. The Millennials are the future as the Babyboomers, which includes myself, have already retired or are approaching retirement age.

My generation was focused on “more and more”. The sky was the limit for consumption during the 1970s-early 2000s heydays of the Boomers, whereas the Millennials value experiences over ownership of things.

It was plainly not the case, though, that there had been a paradigm shift in the Chinese auto market when sales took off in 2009-2017.

The reasons behind the extraordinary rise in sales were a huge increase in consumer debt and government incentive schemes that further encouraged auto sales, such as cuts in auto taxes.

Demand was brought forward from future years. People who would otherwise have been unable to afford to buy a car until a later point in their careers, when they were earning more money, saw the opportunity of cheap debt and lower taxes as too good to turn down.

The growth in auto sales also didn’t reflect China’s per capita income levels. It was debt and tax cuts rather than the affordability of autos based on incomes that drove the surge in sales.

More fundamentally, this was the biggest build-up of debt in global economic history. Alarm bells should have been ringing that at some point the merry go round had to stop as China confronted a major bad-debt problem.

And yet, sadly, too many people ignored this critical detail and believed the excited headlines of China becoming a billion-plus nation of Western-style consumers.

The timing of the end one of these types of trends is very hard to predict. But the exact timing of the end of a short term statistical blip should be irrelevant for a petrochemicals company planning its re-investment strategy over 30 years and more – the lifespan of a new plant.

All a company needs to know is that the blip will end, well short of the lifespan of any new plant they are planning to build.

Too many petrochemicals companies were seduced by the headlines and built capacity to serve the Chinese auto market that is turning into overcapacity. I see this as a particular challenge for the new PP investments targeting China and its autos sector.

The time has arrived, the statistical blip is over. Last year, Chinese auto sales fell by 3.8% as the chart on the left at the beginning of this blog post indicates.  The same chart shows my forecast for this year – a further decline of 10% over 2018.

In January-July this year, sales were actually down by 13.8% on an annualised basis.  But I expect a mild pick-up over the next few months on greater availability of new models of autos that meet China’s new emissions standards. Lack of availability of these vehicles has been a minor factor in this year’s sales decline.

Now take a look at the chart on the right. This breaks down average sales per annum into three periods – pre stimulus, peak stimulus and post stimulus.

Growth in the second-hand car market

China was seen as different from Western markets. Some people were convinced that second-hand car sales in China would never take off because of the lack of status second-hand ownership confers.

“The Chinese are so status conscious, so anxious about building ‘face”, that they will never take to second-hand ownership,” I was quite often told.

Paul Hodges and I disagreed and instead saw a rise in used car sales on affordability issues, once the debt tide receded, and on an improvement in the quality of autos.

It used to be the case that the second-hand autos market wasn’t viable in China because of the poor quality of local autos. But this has changed thanks to a government programme which has raised manufacturing standards.

Second-hand car sales in China are less than half of new sales. But, because about half the cars on the road in China are more than five years old, their owners will soon buy new models.

China’s ratio of used to new car sales is, as a result, expected to match that of the US within a decade – i.e. around double the level of new-car sales.

China’s famously savvy internet innovators are also contributing to the boom in the second-hand market.  The country’s tremendous ability to innovate online is meeting the demand for more affordable transport.

The demand for affordable transport is concentrated in young people born after 1990 because they very often don’t own houses and are at are early stages in their career. In other words, they have less disposable income than their parents.

They are more internet savvy than older people and so are more likely to use online apps to make purchases of cars, with the growth in the scale and efficiency of online sales sites making it very easy to buy a good quality second-hand car.

Much of the increase in consumer debt has been centred on those born after 1990. Young people in particular are therefore feeling the effects of tighter lending conditions as Beijing tries to tackle the bad debts crisis.

When young people can afford a home, it often takes contributions from three generations (grandparents, parents and children).

In Beijing, the house-price-to-earnings multiple is 24.9 compared with 13.3 in London. In other words, it would take the average homebuyer nearly 25 years to pay off a mortgage compared with 13 years in London, where per capita income levels are higher. Many other cities in China have similarly sky-high multiples.

This means that when a young person clambers onto the property ladder, there is very little, if any, spare cash available for buying a new car.

There is a regional aspect to the property bubble that’s also negatively affecting auto sales. This involves the spread of the housing boom from First to Second and even Third and Fourth Tier cities.

During the first six months of the year, real estate development investment rose 10.9% on average across the country, according to official statistics. But it climbed 15.5% in the western part of China and 12.7% in the northeast.

Auto sales in western and northeast China are suffering because every spare RMB, provided by three generations, is being used to get onto the property ladder.

China’s rapidly ageing society, the legacy of its One Child Policy, represents another threat to auto sales:

Back to the strong global consensus on climate change. This discredits the argument that auto ownership China will to rise towards Western levels.

Global warming would not only run out of control if China were to catch up with the US. If China ended up with auto ownership at US levels, the air quality would be much even worse in Chinese towns and cities than it is today. As we all know, the air quality in China is already very bad and has led to a major public health crisis.

What about electric vehicle as a solution? Perhaps one day. But the technology is not good enough to meet current autos demand. If China were to see sales growth continue at 2009-2017 levels, this would have to be via the internal combustion engine.

This would be completely, as I have just said, unsustainable and Beijing knows it. This is why the government is spending so much money on developing electric- vehicle technologies, on promoting ride-sharing schemes and on improving public transport.

Getting used to much lower growth

This all means no return to the rates of new auto sales growth that we saw in 2009-2017. This is simply in impossible. In future, sales of new vehicles will be at much more lower levels.

What will this mean for PP, one of the polymers heavily used by the autos industry?

Annual average PP demand growth in China was 10.7% in the 2009-2017 decade. This stellar performance was the result both of China’s rapid overall economic development and the boom in autos demand that I have just described above.

The downside for future growth, which I presented in my post last Friday, sees PP consumption growth averaging just 2.5% in the ten years from 2019 until 2028. This compares with our base case of 4.6%.

Chinese consumption growth would total 6.9m tonnes in 2019-2028 in my downside, rather than our base case of 12.2m tonnes. On a global basis, because of the intricate links between China and the rest of the world’s economy, global demand would be 81.5m tonnes smaller than in our base case.

The Chinese economy isn’t going to collapse and neither is its auto market. What we will instead see is lower and more sustainable growth, both in terms of debt and the environment. The 2.5% I am forecasting for PP is typical of the growth you see in a developed economy.

But for those companies with the right foresight and planning, this won’t be too much of a shock because, as I’ve argued, it was very possible to predict that what we saw in 2009-2017 was a one-off – an exception.

PREVIOUS POST Global PP demand could be 81.5m tonnes less than forecast in 2019-2028 as China Debt Supercycle ends
NEXT POST President Trump can only cause major economic damage by beating China, unless he has a time machine