China economic stimulus and PP: How global demand could have been 71m tonnes smaller

CHINA came to the rescue of the global economy in 2009. This wasn’t for altruistic reasons as a government study said that unless a huge stimulus programme was launched, 20m Chinese workers would return to the coastal cities from inland China after the Lunar New Year in 2009 without jobs. This would have been because of the collapse of orders from the West for China’s manufactured goods due to the Global Financial Crisis.

This came during a period when growth in the West was on the whole struggling. This was the result of the legacy of the crisis, the drag on GDP from ageing populations and the loss of employment opportunities resulting from automation and the rise of the internet economy.

There was a lot of talk during 2009-2018 of a new long term paradigm of “hundreds of millions of middle class Asians” powering a surge in consumer demand, with Africa waiting in the wings to fully join the modern consumer society.

But the reality was very different:

Take a look at the chart below. This illustrates the scale of China’s global economic rescue act. It is an updated version of the chart I’ve been running for several years but, sadly, the message is still not getting through. Too many people continue to talk only about the role that the Federal Reserve, the European Central Bank, the Bank of England and the Bank of Japan have played in the recovery.

You always, though, need to look at the data and this data is official data from the world’s major central banks. What you can see is that Chinese economic stimulus has been greater than all the other major central banks put together. 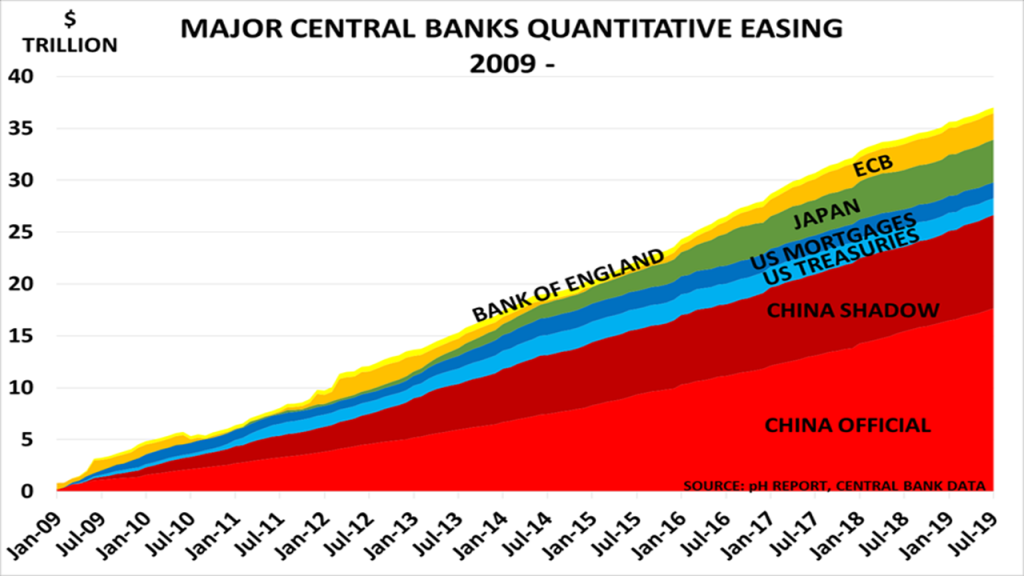 Translating this into the effect on PP demand

In the ten years between 1999 and 2008, China’s PP consumption grew by a total of 6.5m tonnes. This was growth way beyond all the other emerging markets. In the Asia & Pacific region, for instance, which includes the whole of Southeast Asia and the Indian subcontinent, consumption grew by just 2.6m tonnes.

This was disproportionate to population size. China had a population of more than a billion people during this period versus some 3bn in Asia & Pacific. The imbalance reflected China’s role as the workshop of the world. Its far bigger export-based manufacturing capacity demanded much greater volumes of PP raw materials. The same applied to all the other petrochemicals and polymers. China‘s manufacturing prowess generated stronger average per capita income growth than in Asia & Pacific, adding to the discrepancy in PP consumption growth.

But then China’s growth went into overdrive as economic stimulus led to a major wave of new petrochemicals and other manufacturing capacity. A real estate bubble, the scale of which the world has never seen before (and this is not hyperbole, it’s what the data say) generated great personal wealth for those lucky enough to be able to get on the property ladder. This wealth generation led to a boom in consumer spending, as did numerous government schemes supporting sales of autos, washing machines and refrigerators etc.

Innovation in internet sales was another major factor behind the consumer boom. China is in many respects the most wired society in the world. You can almost exist in cities such as Shanghai without using hard cash. The explosion in internet sales would not have been possible without cheap lending that enabled China’s many brilliant internet innovators to launch their businesses.

The effect on PP demand was quite stunning – and the same applied to all the other petrochemicals and polymers. In the ten years between 2000 and 2018, China’s PP demand rose by an astonishing 14.4m tonnes. Meanwhile, as the ripple effects of China stimulus spread across the rest of the world, Asia & Pacific PP consumption increased by 5.7m tonnes – more than double its rate of increase during the previous ten years.

A “What If?” scenario: China injects half as much stimulus 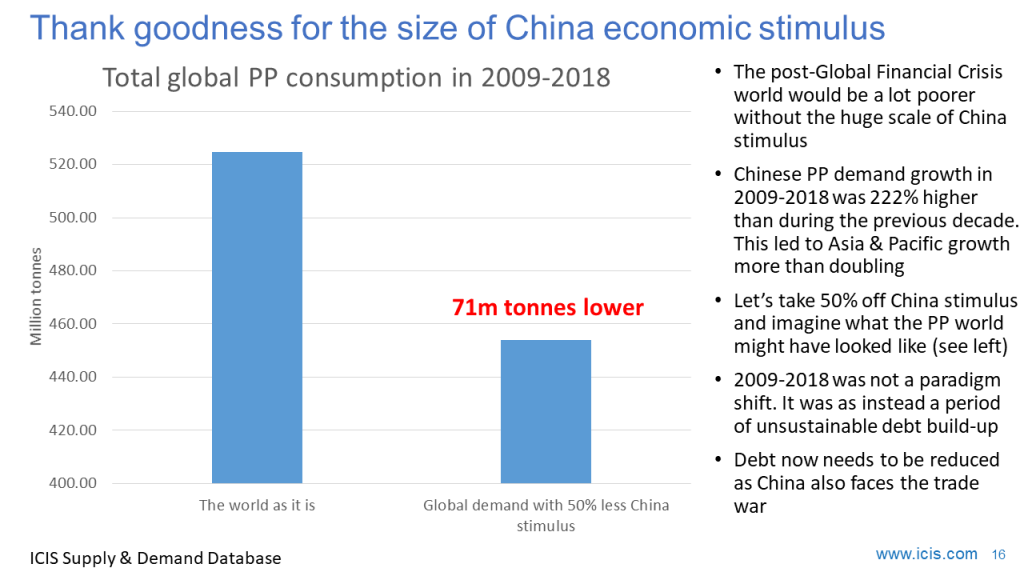 Just imagine, for argument’s sake, that China had pumped 50% less stimulus into its economy between 2009 and 2018 and this had exactly correlated to 50% lower growth in PP demand. This would have of course meant Chinese 2009-2018 PP demand growth at 7.2m tonnes rather than the actual 14.4m tonnes.

Let’s think through what would have been the effect on the rest of the world:

The end result you can see from the chart at the beginning of this section. Total global PP demand (not demand growth now, but total demand) would have been 71m tonnes lower during all the years from 2009 until 2018. Deman would have totalled around 454m tonnes rather than 525m tonnes.

The end of an era

Excuse me, Mr Trump, do you still believe that the US would have been better off without close integration with the Chinese economy?

We can clearly see the huge impact that economic stimulus must have had on Chinese PP demand and on global demand as well. There is no way that Chinese demand growth would have otherwise surged to 14.4m tonnes during 2009-2018. This was 222% more than the growth in 1999-2008.

What happens next? China has been in a post-stimulus era since January 2018. This always had to happen at some point because of the bad debts left over from the period of hyper stimulus.

As I shall discuss on Friday, the weight of bad debts gives China very limited options to reverse course through new stimulus, even if the trade war gets worse.  The trade war will, in my view, get worse as we move into a global recession.

The problem for the global petrochemicals business in general is that it is in denial. It continues to invest on the basis that Chinese demand growth in 2009-2018 wasn’t an historic anomaly, but instead presented a new, long term paradigm shift. The data clearly tell us this was an anomaly.

PREVIOUS POST Hong Kong an example of rising political risk and the end of easy growth
NEXT POST Global PP demand could be 81.5m tonnes less than forecast in 2019-2028 as China Debt Supercycle ends