China benzene and its derivatives could see negative growth in 2019 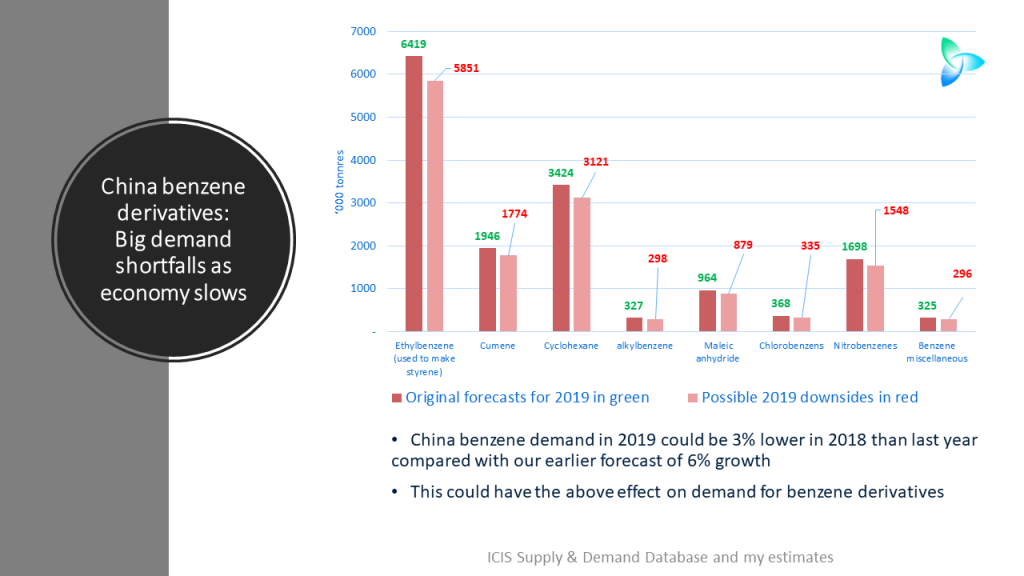 NOW let’s put this all together. My LinkedIn post on Tuesday highlighted how spreads between CFR Japan naphtha feedstock costs and CFR Northeast Asian benzene prices have only been below $100/tonne during three periods since 2000.

The first of these occasions coincided with the end of the dot com bubble and 9/11. Then came several months of sub-$100/tonne spreads during the Global Financial Crisis. Now we have entered a third period as China’s economy undergoes a long term, structural slowdown. Spreads have been below $100/tonne for six months so far this year. The Trade War is of course another factor, but only a secondary factor.

In all the months that spreads have been below $100/tonne since 2000 they have averaged just $50/tonne. This compares with $250/tonne during the months when they have been above the watermark.

Some of my contacts wondered whether economic crises and suppressed benzene spreads might be a case of correlation rather than causation. They asked whether the real cause could be high feedstock costs.

No, as my LinkedIn post on Wednesday detailed. During both the dot com bubble, 9/11 and the Global Financial Crisis, oil and so naphtha prices fell. During the six months in 2019 when spreads have been below the $100/tonne benchmark, spreads have averaged $70/tonne versus naphtha of $514/tonne. During the full-year 2018, spreads were at $208/tonne with naphtha at $619/tonne.

Another query raised by a contact was whether a big rise in Chinese benzene capacity in 2019 was the real cause of the poor spreads, and whether there were similar big rises in capacity during the dot com bubble and the Global Financial Crisis.

Here is the critical thing as well. During a relatively modest period of excess capacity over demand, Chinese production and thus operating rates in 2019 look set to undershoot the estimates we had made at the start of this year:

China’s benzene demand growth could be negative in 2019

Apparent demand is of course net imports plus local production. Add the above numbers together and this implies that China’s benzene demand growth might decline by 3% during the full-year 2019 versus last year. We had expected positive demand growth of 6%.

If demand growth is at minus e%, this would leave this year’s demand at 14.1m tonnes – 1.4m tonnes less than we had forecast. This would be the first year that China’s benzene was negative since 2000.

We have to be careful, though, as these are only preliminary number. We could end up increasing our estimates of local production. Imports might also have picked up in November with the trend continuing in December, but this seems unlikely given that markets have already started to quieten down ahead of the 2020 Lunar New Year which falls on 25 February, earlier than in 2019.

What seems certain to me, however, is that 2019 demand growth will end up below our estimate of a positive 6% because of, as I said, the structural and long-term slowdown in the Chinese economy.

The slowdown is evident from one of the critical end-use markets for benzene derivatives and other petrochemicals, which is automobiles. January-November sales of new autos in China imply full-year sales will be 10% less than in 2018. China’s auto market will see lower new autos sales growth over the long term.

The momentum behind retail sales in general has declined, especially, as I’ve been warning all year, the sales of big ticket or discretionary items. A study by JD Digits finds that discretionary spending in China dropped by several percentage points to 56% of overall spending during the first ten months of this year. Autos clearly fall into this category.

What this could also mean for benzene derivatives demand 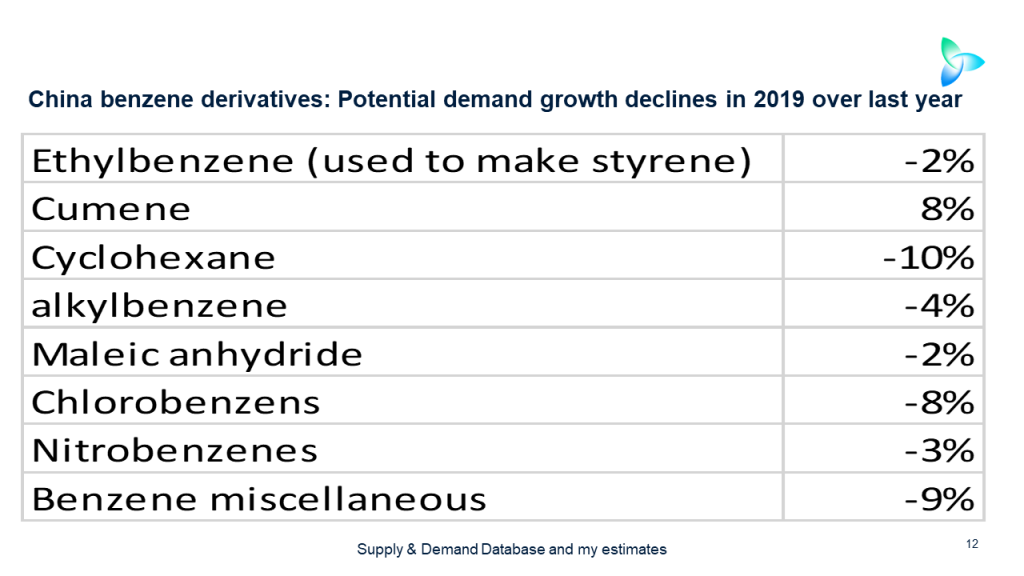 This would for example mean 41% of benzene disappearing into styrene (which goes downstream in polystyrene and acrylonitrile butadiene styrene etc), 22% into cyclohexane (downstream into nylon), 13% into cumene (into phenol derivatives such as polycarbonate and phenolic resins) and 11% into nitrobenzene (into polyurethanes). Smaller percentages then find their way into the other benzene derivatives.

The end-result is the chart at the beginning of this blog post, where I compare our earlier estimates with the possible downsides for all the benzene derivatives in terms of tonnes. This would result in negative demand growth over 2018 for all the derivatives, which is next detailed on the table that you can also see immediately above.

To stress again, it may not be as bad this, but I am sure that consumption for several derivatives will be below our original forecasts.

Businesses need to adjust to lower growth in China by stripping out costs, rationalising expansion plans and moving to more service-focused models. There is still great money to be made in China, provided individuals and companies recognise that we are never going to see demand growth return to the levels of 2009-2017, during the peak stimulus years.

PREVIOUS POST US/China trade deal achieves little as China pushes hard towards petrochemicals self-sufficiency
NEXT POST Happy Festive Season and all the best for 2020: The blog is back on 5 January