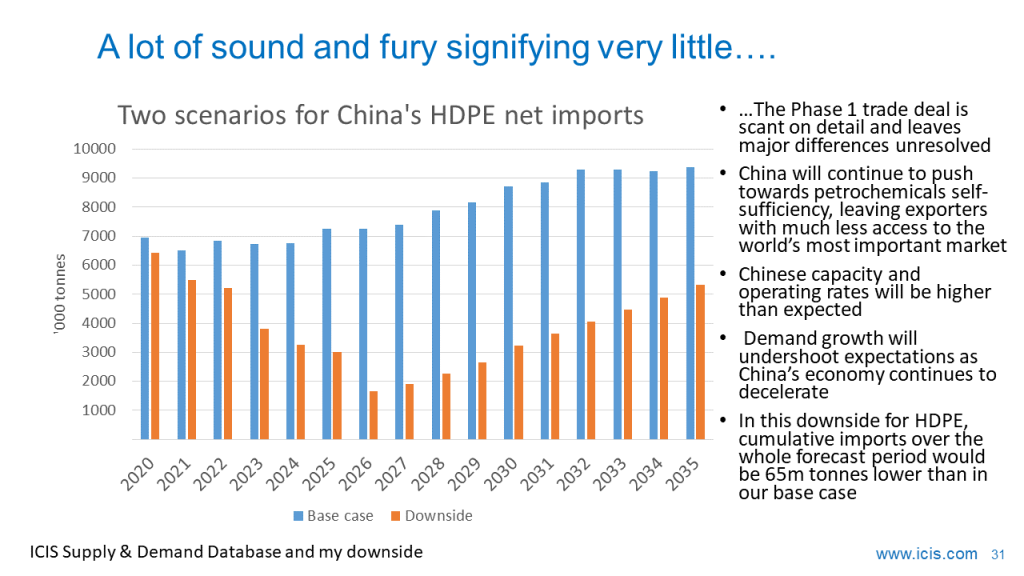 PRESIDENT Trump has promised a “tremendous amount of business” for US farmers following the announcement of a “Phase 1” trade agreement with China.

But US claims that China will eventually buy up to as much as $50bn of US agricultural products seem to defy economic logic given the price of soybeans, the level of previous Chinese purchases of US agricultural goods in general and the distorting effect that this number would have on international markets. If the $50bn number is reached, other countries would end up lodging complaints under international trading rules about US exports to China receiving preferential access.

A further complication over the US claim is China’s African swine-fever epidemic. There are not enough Chinese pigs left to eat all the US soybeans that the US says China will import. China’s imports of soybeans have fallen by millions of tonnes Perhaps it will import US pork instead. In theory, US exports of pork to China could jump to $8.9bn from $1bn in 2017. But that would likely result in more expensive pork prices in the US.

Here is what obviously matters far more than any of the above: China hasn’t confirmed the $50bn number of agreed US agricultural imports and has only said that it will buy greater amounts of US agricultural products “that are competitive in the market”.

The US adds that China has made commitments to make “structural reforms and other changes to its economic and trade regime in the areas of intellectual property, technology transfer, agriculture, financial services, and currency and foreign exchange’. Neither side has presented any details of what this amounts to, and it’s been argued that China had already intended to implement changes in these areas regardless of any trade deal.

Here is another critical detail: The details of the deal had yet to be translated into Chinese and the deal needed to be legally vetted, said Beijing. Remember just over a year ago when White House trade adviser Larry Kudlow told us that trade talks had gone “very well” and a truce has been reached? As we all know, the trade war subsequently escalated.

Phase I involves only a very limited easing of tariffs. China had wanted all tariffs removed, but that will only happen if Phase 1 is ratified and if further Phase 2 etc. deals are agreed and signed. The US is maintaining 25% tariffs on $250bn of Chinese imports. New tariffs on $156bn of imports have been cancelled, though, and it has halved 15% tariffs on another $120bn of imports.

No significant benefits for petrochemicals markets

Let’s assume, though, that the very limited Phase 1 deal is ratified by China. The modest easing of trade tensions would deliver equally modest benefits to the global economy and petrochemicals demand. We might also see a slight recovery in petrochemicals pricing, thanks to positive sentiment.

BUT you must remember the trade war is essentially an economic sideshow. A far bigger and still widely unrecognised deal for the global economy is the structural and long-term slowdown in China’s economy. This explains the global manufacturing recession.

The deal might be politically useful for the President as he tries to deflect attention away from the impeachment process as he builds towards the 2020 election. But he is on shaky political ground because of claims he has gone soft on China. “He has sold out for a temporary and unreliable promise from China to purchase some soybeans,” said Senate Democratic leader, Chuck Schumer.

Don’t therefore rule out Trump once again escalating the trade war in order to boost his prospects of re-election. Such a response will grow more likely if criticism of going soft comes from Hawks in his own political camp and if US stock markets remain strong. The President sees US equities as almost the sole measure of the strength of the US economy.

The Chinese reaction to the Phase 1 deal must also be considered. Muted seems to be the best word to describe Beijing’s response. Further, in a speech before the Phase 1 announcement, China’s minister of foreign affairs, Wang Xi, criticised the US for having “seriously damaged the mutual trust between the two countries”.

I fear we have gone beyond the point of no return. The Phase 1 deal made no mention of the core US complaint against China, that is uses heavy state subsidies to support local state-owned and private companies. China was never going to abandon a practice that is essential if it is going to maintain its economic prosperity through escaping its middle-income trap.

China must double-down on state subsidies in order to boost its high technology independence as it can no longer depend on access to US technology. The US is restricting Chinese access through, for example, recent rules restricting local companies from buying Huawei technology.

China’s desire for greater high-tech self-reliance was highlighted through an announcement made just days before all the hu-ha about the Phase 1 deal. Beijing has ordered all government offices and public institutions to remove foreign computer equipment and software within three years.

Just imagine for a moment what it would mean for Dell, Apple, Microsoft and other tech giants if they were to lose much of their access to the Chinese market as China became more self-sufficient. No high-tech company can possibly flourish without access to China. Last year, for example, 48m personal computers were shipped to China. China has more personal computer customers than any other country in the world.

And just imagine what it would mean for the global petrochemicals business if China were to also push for much greater petrochemicals self-sufficiency. So far China has been unable to keep up with its voracious appetite for petrochemicals, despite big local capacity expansions. It remains the biggest importer of polyethylene (PE), polypropylene, styrene, mono-ethylene glycols and paraxylene.

I have no doubts whatsoever, based on my reading of events in China, that this is going to happen. China is building state-of-the-art, highly integrated refining and petrochemicals complexes that are adding value to its economy as it tries to escape its middle-income trap. These complexes can also enable it to gain much greater petrochemicals independence in a highly uncertain global trade environment.

More capacity will be built than most people expect and operating rates at petrochemicals plants will defy conventional expectations. Plants will be run hard, regardless of economic conditions, for import independence reasons. Demand growth will undershoot mainstream thinking on a slower economy and the big push towards greater sustainability as China attempts to address its chronic plastic and other pollution problems.

Let’s consider what this might mean for one polymer – high-density PE (HDPE):

The Phase 1 trade deal changes nothing, neither the short nor the long term. It is comforting to think otherwise as coming to terms with the end of the old era, of ever-more open global markets, is not easy. But that era is for good, I fear.

It I also important note that Phase I has done nothing to address the other big rift between the US and China. Along with trade and technology there’s also geopolitics. The way things stand today, the pair are heading towards military conflict. It is again comforting to think otherwise, but that would involve ignoring the evidence of history. Over the last 500 years, in 12 cases out of 16, a rising power has ended up going to war with an incumbent power.