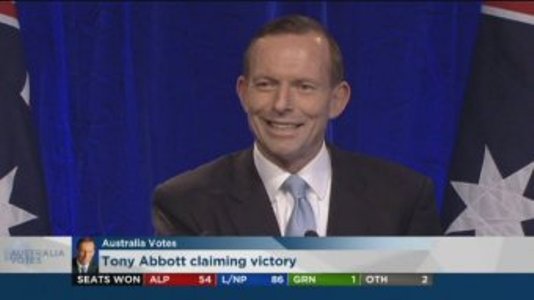 TONY Abbott, in his victory speech on Saturday following the Coalition victory in the Australian Federal Election, renewed his pledge to scrap the carbon tax, stop the boat people and bring the budget back into surplus.

The blog has to admit, in this time of nonsensical sound-bite politics, that staying “on message” during an election campaign is essential if anyone ever wants to get elected.

There is nothing Mr Abbott has said during his years in opposition, nor during the campaign, that gives us any confidence that he gets it.

Let’s hope he has a hidden and visionary policy agenda. But then, of course, he will have misled the Australian people. And so, even if he has such an agenda, he is likely to be out on his ear in three years’ time, when the next Federal Election comes along.

Above and beyond all else, Australia has been a Lucky Country because of China.

There is now at least a 50% chance that China won’t successfully make its economic transition within the next decade, if it all. The outgoing Labor government has already had to write-down tax receipts by Aus$33bn in just ten weeks because it got the pace of the Chinese slowdown so very badly wrong.

And even if China is successful in its economic transformation, its resources demand growth will slow down.

Thus, just digging stuff out of the ground and sending it to China isn’t going to work anymore as the main strategy for Australia.

Even if we are being too negative on demand growth for resources, Australia will still have to do something about its exceptionally high cost base. How will Australia compete for the next wave of natural gas and minerals projects, given that it is pricing itself out of further investments? In a world of assured and strong demand growth, everyone succeeded. But in the New Normal only the most cost efficient, and also the most innovative, will make it.

Talking about innovation, or rather the lack of it, one of the old routes to success in Australia was for a young person to leave school at 16 with very few qualifications and get a job driving a truck on an iron ore or coal-mining project on a starting salary of more than Aus$100,000 a year.

Or in a city such as Perth, the blog’s home city, it was equally possible to make an excellent living providing the goods and services demanded by the resources sector, often at very-high margins.

There was also a third order effect. All the money flowing into the economy in general from the resources boom created lots of other opportunities, including in the overheated property sector and in civil projects paid for by soaring Federal and State tax receipts.

Young people need to stay at school longer and go on to technical colleges and universities where they must learn the skills essential to invent, manufacture and market and sell the products of the future. In the case of China, this will mean focusing on the tremendous growth opportunities offered by, for example, environmental protection and the sustainable development of cities. But, again, this will have to be done cheaply. Many other countries are lining up to supply China with goods and services that satisfy these needs at costs lower than Australia is able to match.

During election campaigns, choosing emotive issues often gets the job done. Mr Abbott has been superbly successful at doing only this.

But the carbon tax is a non-event in global terms. It was, we agree, probably a daft tax to start with, but its abolition will do nothing to set to Australia on the right course.

Equally emotive is the boat people issue. This is an awful human strategy. We should always react as compassionate human beings to a problem of this nature and this should shape all policy responses, especially the policy responses of a very-rich country such as Australia. Rich countries, because they have the money to do so, should always lead by example. But in cold, big picture economic terms, this is again a non-issue for Australia.

As for the pledge to return Australia to a budget surplus, how is Mr Abbott going to do this if Australia’s tax receipts  take a further big hit from the slowdown in China? We think that this is very likely.

The key will be a 20-year strategy of government spending on targeted on education, on infrastructure and on innovation in  manufacturing and services, even if it means periods of budget deficit.

Come on, Mr Abbott – please deliver. We love this country and we want you to succeed.

PREVIOUS POST Every Time You Dip Your Toe In The Water...
NEXT POST Analyse The Data And Listen To Li Keqiang