China lending remains out of control ahead of November’s plenum 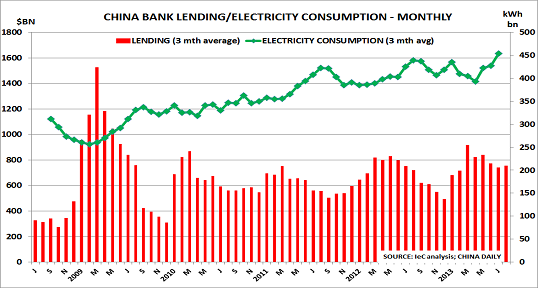 The blog’s views on the unsustainability of China’s epic economic growth since 2009 have now become truly mainstream.  Everyone now agrees, including the new leadership, that it was created by a credit bubble.  State-owned China Daily has even now warned that a commercial property bubble potentially now exists alongside the residential bubble and the infrastructure ‘white elephants’, adding:

“Once the commercial property market crashes, nobody is willing to rent a shop that loses money every day, when there is no customer but accumulating rental and utility fees.”

Whilst the Wall Street Journal has just finished a detailed 7-part survey of the whole issue.  Its conclusion is clear:

“Bank-fuelled lending to state enterprises and local governments has led to overcapacity; serious debt problems for local governments, companies and lenders alike; and numerous white-elephant projects, from nearly empty malls and resorts to bridges to nowhere”

The problem, of course, is how to unwind it.  The new leadership is clearly now trying to restrict lending, whilst the powerful State-Owned Enterprises (who dominate the economy) spend their time trying to avoid the new controls.  Even more worrying is that nobody really knows how much debt exists:

Any major borrowing increase over 3 years is worrying enough, as fellow-blogger John Richardson noted last week.  But it becomes even more worrying when nobody knows if the real increase has been 50%, or 80% or 100%+.  As China’s official bank regulator warned last week, “There is a structural gap between the supply of capital and companies’ real needs.”

As the chart shows, 2013’s official lending (red column) is up 7% versus 2012, and 50% above 2008 levels.  But the real action today is in the shadow banking area, where the SOEs have been operating.  After first squeezing them in June, the authorities relented in July, allowing shadow banking to account for an unbelievable 87% of total lending.

Clearly this was far too high, and August data shows it was reduced to 55% of the total.  But even this level shows lending is essentially still out of control.  And this conclusion is confirmed by data for electricity consumption (green line), the best proxy for real GDP growth, which hit a new record in July.  Yesterday’s strong data for industrial production confirms the picture.

We have been here many times since July 2009, when the blog first wrote about the problem.  In the past, the government has always given way after a brief struggle, and allowed the bubble to keep building.  That is clearly the general expectation today.

But this time may well be different.  President Xi’s father dealt with much greater problems when he ran Guangdong province from 1978 and helped Deng to reopen China to the world after Mao’s death.  The next few months will tell us if his son has inherited his character, as plans for the November plenum are finalised.