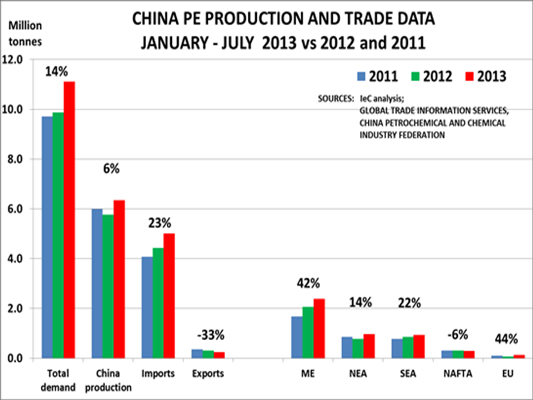 As the chart above shows, China’s apparent PE demand (imports plus domestic production) grew by 14% in January-July 2013 compared with the same period in 2011, according to Global Trade Information Services and official government data.

This compares with a 13% increase recorded for January-June and is a far cry from the gloom that dominated the market in May. Back then, producers and traders were predicting that full-year 2013 growth would be flat or even declining.

Part of the explanation, as we first flagged up again in May, is that the surge in bank lending during Q1  is still working its way into the economy.

We are also in the midst of the peak manufacturing season and the latest agricultural film-buying season.

All  of the above – along with greater than expected credit availability in August – help to explain why overall industrial production rose to a 17-month-high in August.

“Plastic film production has followed the trend in overall industrial production. In the first five months of this year it was quite weak, but has picked up quite significantly since June and was very high in August,” said a sales and marketing executive with a global PE producer.

When the data on PE apparent demand for August is released, it therefore seems likely that it will point to another very-strong month.

And so what will happen after August until the end of 2013?

It seems logical that some of the extra credit made available in August will again take several months to have its full impact on the economy, especially as most of it seems to be in the form of off-balance sheet lending at the municipal level. Money raised in this way is used for infrastructure projects – hence a time lag.

But this is exactly the sort of lending that Beijing is trying to restrict.

And so more policy adjustments designed to direct credit away from bad investments seem inevitable, especially after the November plenum.

What also seems inevitable is that there will be further trial and error as China tries to get its economy on the right track. Economic reforms on this scale and complexity have never been tried before and so there are sure to be further unintended consequences for chemicals demand.

There are other aspects to the 2013 story that remain very hard to quantify. These include the extent of the boost to demand from rising income levels amongst low-wage earners and increasing food-contamination concerns.

You want a number? Of course you do and so we have tried.

The consensus view from our highly unscientific survey amongst producers and traders is that when inventory effects are removed, real PE demand growth in China in 2013 will be between 5-8%

PREVIOUS POST Analyse The Data And Listen To Li Keqiang
NEXT POST It Is Not A Question Of If, But Rather When