China And The Need To Keep On Digging 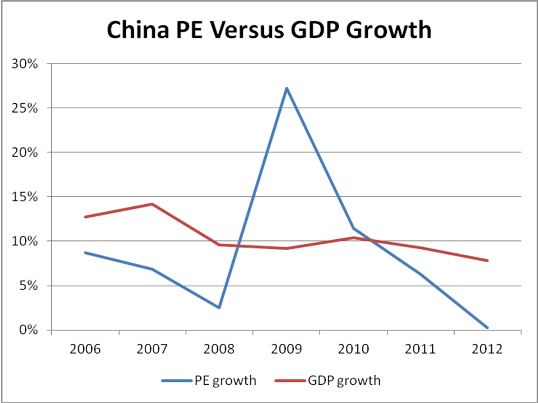 POLYETHYLENE (PE) demand growth in China during 2007-2012 was essentially a story of:

Hence, as you can see from the above chart, PE demand growth has been way-out-of-kilter with increases in GDP.

This year has been a story of a return to stimulus-driven growth in order to shore up political support ahead of the November plenum, according to the best guess of many Asian traders and producers that have spoken with the blog. They say that this largely explains why apparent demand growth (domestic production plus imports) has been 14% so far this year compared with 3-6% underlying demand growth that they think will be the real number for 2013, when inventory building is discounted.

All the above seems to have a great deal of validity. But what if other factors are at work? For example what if excessive investment, although widely viewed as a big weakness in China’s economic growth model, is in some cases delivering unintended benefits?

“A paper for the World Bank by three consultants this year found that Chinese cities connected to the high-speed rail network, as more than 100 are already, are likely to experience broad growth in worker productivity,” writes the New York Times in this article.

“The productivity gains occur when companies find themselves within a couple of hours’ train ride of tens of millions of potential customers, employees and rivals.”

Some of China’s railway projects might face huge financial strain, sure, but, just as was the case after the US railways investment boom, the tracks are hardly going to be ripped up. Thus, the economic gains might be permanent.

On the surface, yes, domestic consumption appears to be lagging way behind investment as a driver of GDP.

And as investment is inevitably reduced post the November plenum, overall GDP growth could plunge and with it not just PE, but chemicals and polymers demand growth in general as China’s economy undergoes its big adjustment.

But what if the strength of domestic consumption has been underestimated?

“Jun Zhang and Tian Zhu, respectively of Fudan University and China Europe International Business School, who argue that consumption has been consistently under-reported,” writes the Financial Times in this article.

“In a recent paper they find three important areas of under-counting.

“One is housing. China, they argue, does not properly account for ‘imputed rent’, an estimate of how much owner-occupiers would need to pay if they were renting.

“Second, they say, a lot of private consumption shows up in statistics as corporate expenses. For example, many executives pay for their private car on the company account. Although this appears in official data as investment, it is really consumption.

“Third, and most important, they argue, GDP surveys under-represent high earners, who may not relish the idea of officials with clipboards noting down their every expenditure.

“If high-income households are missing from the survey, so is their consumption. Taking these three factors together, the two academics calculate that China underestimates consumption by 10-12 percentage points.”

This is incredibly complex stuff and needs a great deal more research.

But what is obvious is that now that the Supercycle is over, while GDP growth still remains important in measuring chemicals and demand growth in China, we need to dig a great deal deeper. We need other measures a well.

PREVIOUS POST US Petchem Feedstock Costs: Not All Gloom for Asia
NEXT POST Malaysia's Scary Investment And Spending Bubbles