Home Blogs US Petchem Feedstock Costs: Not All Gloom for Asia

US Petchem Feedstock Costs: Not All Gloom for Asia

YESTERDAY we examined some of the factors shaping long-term outlook for polyethylene (PE) exports to China. And, today, as promised, we go into detail on another part of the story: Influences on future feedstock-cost position of US producers.

What follows only scratches the surface. There are many more complexities that we shall examine in future posts. We will then provide you with an executive summary. 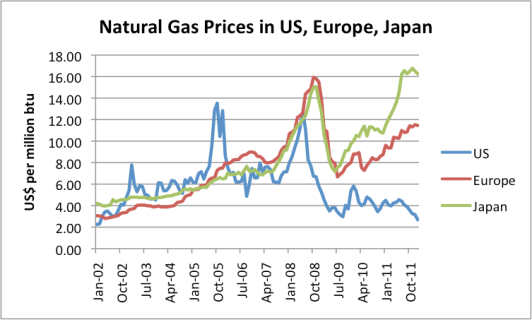 PRICE is the mother innovation and investment. And so, when US natural-gas prices soared to nearly $14/mmBTU in 2005, hydraulic fracturing really took. If this hadn’t have happened, the great George Mitchell’s persistence might not have paid off to such a huge extent.

And here is another hackneyed, but still valuable “truism”: History has a habit of repeating itself, not always in exactly the same way, but nevertheless in patterns that can be identified by anyone willing to look beyond a US petrochemical company’s current stock price, or its next few sets of financial results.

Thus, we think that price could once again be the mother of innovation and then investment in the natural-gas industry – in this case because prices have fallen so low, particularly for ethane. This could threaten the competitiveness of some of the numerous US cracker and derivatives projects.

At the moment, everything looks wonderful because, according to Bloomberg in this article:

The problem is that the gas grid can only take so much ethane and those limits are now being reached. Some 200,000 barrels a day of ethane is already being “rejected” into US natural-gas supply and technical limits could be even further stretched when the figure increases to 500,000 barrels a day in a few years.

Ethane supply has soared because ethane has to be separated from propane and butane (liquefied petroleum gas).  Unlike ethane, LPG has a big international market and the US has tripled its capacity to ship LPG since 2011 with more expansions on the way.  Thus, gas producers have been extracting ever-more volumes of LPG from shale gas and in so doing, have to find ways of “disposing” of surplus ethane.

But INEOS has already signed a contract for a 15-year-deal to ship US ethane to two of its European crackers.  Versalis and Borealis, both also of Europe, are planning similar moves and at least one Asian petrochemicals producer is reportedly studying the feasibility of moving US ethane to Asia.

The economics of shipping large volumes of ethane from the US are questionable, however. LPG is said to be easier to ship because it only has to be pressurised, whereas ethane has to move the same way as ethylene – at around minus 100 degrees centigrade. We also understand that most ethylene carriers are not big enough to move ethane economically and so specialist vessels have to be built.

Nevertheless, until George Mitchell came up with the idea of using water for fracking instead of drilling fluids in 1998, nobody gave shale gas a chance. A few years later, as we have already described, the surge in US natural gas prices then led to the widespread use of fracking as more and more companies invested in perfecting and making use of the technology.

What might be more feasible, perhaps, is finding further uses for ethane in the US itself.

Further underling the motive for innovation are these statistics: Ethane can represent 44% of the content of the total natural-gas liquids (NGLs) by volume in a typical gas reserve in the Bakken shale oil and gas field in the US but only 14% of the value, according to this article in Hydrocarbon Processing.

Dedicated ethane pipelines could be built to supply power plants and even people’s homes, provided cost-effective adaptations can be made to gas turbines, stoves and water heaters in order to prevent temperature damage from the ethane.

“Pipeline operators such as Enterprise also may find ways to sell ethane into municipal gas grids in Louisiana and other markets that haven’t reached their limit on using high-energy ethane,” Peter Fasullo, a principal at En*Vantage, a Houston energy consultant, told Bloomberg in the article we have already linked to above.

Lighter hydrocarbons, including ethane, can be converted into gasoline blendstock via the alternative technology, says the Texas-head quartered company.

Synfuels claims that its technology saves on capital costs compared with standard GTL technology, as smaller scale plants can be built.

And crucially, because of the smaller scale of the plants, natural-gas players have the option of installing units at production sites – thus saving all the expense of piping ethane, adds Synfuels.

Dow Chemical CEO Andrew Liveris has also warned that if too many liquefied natural gas (LNG) projects win approval US, us natural gas prices (methane) will increase. The ethane price is linked to the price of methane.

“America’s natural gas bounty is more than just a commodity. It’s a once-in-a-generation opportunity for America to export advanced products [including Dow’s linear low-density PE], not just BTUs,” he has said.

A new study, conducted by researchers at Purdue University in the US, concludes that the shale gas revolution can benefit the US economy by $473bn a year.

Restricting gas exports increases the magnitude of the annual gains to $487 billion, according to the report.

But, of course, the US natural gas producers have a different perspective. Their job is to turn around what has become a business with returns poorer than they had anticipated – because of an overall gas-supply glut. Thus, they will lobby hard for Federal approval of the 20 or so LNG projects in the US, to add to the four that have already been given the go-ahead.

And finally, what about the argument that estimates of ever-rising natural gas production in general in the US – including, therefore, of course, of ethane- are way off the mark?

“Shale wells deplete rapidly, with up to 95% production front-loaded into the first three years,” writes Carl Pope, former chairman of the US environmental group, the Sierra Club, in this second Bloomberg article.

“There is also uncertainty about the degree to which deposits such as the Barnett Shale in Texas contain ‘sweet spots’ – concentrated veins where production is relatively cheap surrounded by much larger areas where wells are less productive and profitable.

“The Energy Information Administration warns that its own projections of plentiful shale “are highly uncertain and will remain so until they are extensively tested with production wells.”

PREVIOUS POST China PE Imports: A Long-Term Outlook
NEXT POST China And The Need To Keep On Digging

By John Richardson THE chart below is worth revisiting, and pondering aga...

China And The Need To Keep On Digging

By John Richardson AFTER a very challenging first quarter, nobody wants to make further write-downs ...

By John Richardson PLEASE DON’T say I didn’t warn you. China is rapidly moving towards polypropy...

By John Richardson ALL OF us are struggling to come to terms with a collapse in the global economy t...

By John Richardson POLITICIANS, not just including the Populist variety, are talking a lot about res...

By John Richardson RECENT rises in oil and petrochemicals prices should not in my view be taken as a...

By John Richardson AS PETROCHEMICALS storage space in China fills up on the hope that the country ca...

By John Richardson IT IS NOT just a razor-like focus on petrochemicals demand that will get you thro...

By John Richardson PETROCHEMICAL companies can adapt to the coronavirus New Normal by running their ...