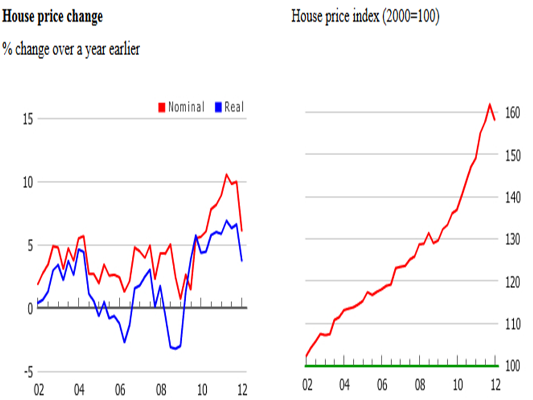 Will this time really be different in Southeast Asia? Everyone hopes so.

But the arguments put forward by economist Jesse Colombo back in January – about investment bubbles building up across the region – served as an early warning that it is possible we are heading for another economic crisis on the scale 1997-1998.

Conventional wisdom has it that there can be no repeat of the Asian Financial Crisis because:

But it is the amount of air that has been into any particular bubble that matters. The more air that is pumped in the greater the scale of the eventual explosion and economic collapse.

And conventional wisdom has a depressing habit of being wrong. People can get blinded by all the hype and so miss what, in retrospect, turn out to be very obvious danger signals.

In a series of blog posts about  Southeast Asia –  on Indonesia, Thailand and Malaysia – we have argued that one overlooked danger signal is  a failure to press ahead with much-needed structural reforms. Reforms have been put on the back-burner because easy credit has made life far too easy for politicians and businessmen and women.

And in this article in Forbes magazine on Malaysia, Colombo argues that the country – along with the rest of the region – has benefited from:

The above charts show the surge in Malaysian real-estate prices, with the recent fall in prices a reaction to fears in May-September about imminent Fed tapering.

Asset bubbles in general have been inflated by alarming increases in local government and household debt –  a consequence of all the cheap and plentiful credit.

“Malaysia’s public debt-to-GDP ratio has been hovering at all time highs of over 50% thanks to large fiscal deficits that were incurred when an aggressive stimulus package was launched to bolster the country’s economy during the Global Financial Crisis,” writes Colombo.

And as for household debt, he adds that its ratio to GDP has “hit a record 83% – Southeast Asia’s highest household debt load – which is up from 70% in 2009, and up greatly from the 39% ratio at the start of the Asian Financial Crisis in 1997. Malaysian household debt has grown at around 12% annually each year since 2008.”

A driver of private debt explosions  is when average and low-income earners desperately try to “keep up with the Joneses” . This, of course, can only happen during periods of low real interest rates (the blog will discuss how this affecting Australia in a later post).

Paul Selva Raj, CEO of the Federation of Malaysian Consumers Associations (FOMCA), told Colombo that 47% of young Malaysians were in “serious debt” (debt payments amounted to 30% or more of their gross income)

“Car purchases and credit card debts are among the main reasons for bankruptcy in Malaysia. It’s the culture we live in. There’s a lot of emphasis on status and being ‘cool’ – but being cool costs money,” said Selva Raj.

The question might thus be when and how Malaysia’s bubble will end, rather than whether it will end.

Fed tapering might be the trigger, as mentioned above. It has to happen at some point.

So could China’s new economic direction, when it eventually decides to stop kicking the debt can down the road.

Sure, one can argue that there will be plenty of companies across Southeast Asia that will be well-positioned to take advantage of China’s need for higher-value goods and services.

But has Malaysia invested enough in education and innovation to be able to take advantage of the new China? Several Malaysian friends of the blog have answered this question with a very firm “no”.

The tricky job for any chemicals company is to separate all the froth added to demand-growth numbers from the perhaps more solid base of the millions more people in Southeast Asia who have crossed income thresholds.

We say “perhaps” because there is the very real and horrible risk that some of these millions could end up back at square one if,  indeed, the next crisis is as bad as 1997-1998.