Chemicals Companies Need To Prepare For Deflation in 2014 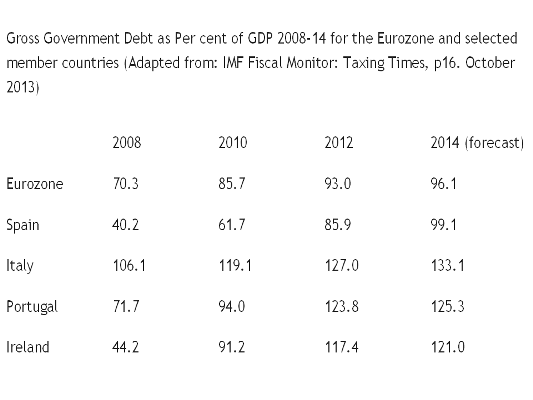 IF the US Fed’s polices are working why is AP Moller Mearsk – the shipping company which is widely seen as a proxy for global trade – cutting costs and reducing capacity?

Probably because as Henny Sender wrote in the Financial Times: “It is clear that the Fed’s quantitative easing is not about a real economic recovery, it is only about generating the liquidity that gives rise to asset inflation and wealth-led growth. Or super wealthy-led growth since wages and incomes for the rest of us are not rising at all.”

The reason for the failure of these economic policies is that aggregate demand in the West is on decline because of demographics.

The blog is growing ever-more pessimistic about the short to medium-term outlook, but is clinging on to the hope that in the long term, politicians will finally wake up to what needs to be done.

Helmut Schmidt, who was chancellor of  the former West Germany, recommended in a 2010 speech that his country needed to accept cuts in pensions and a later retirement age as part of Germany’s efforts to tackle a rapidly ageing population.

A solution also needs to be found to Europe’s rising public debt burden (see the table at the top of this post). Perhaps much of this debt needs to be written off and we need to start again.

In the meantime, though, we are on the edge of a deflationary downward spiral in Europe.

And, although deflation hasn’t arrived in Asia as yet, disinflation is a problem in its export-focused countries – because of ever-declining demand in the West.  The OECD estimates that world trade volumes have grown at 3% since the end of 2011, well below the 6.5% growth rate of the last few decades.

Another big risk over the next few years is that China is forced to export its manufacturing surpluses into constantly weakening Western markets, thus accelerating the deflationary downward spiral and triggering a sharp increase in trade protection and more localised markets. The conclusions of this detailed study on China’s economic rebalancing – by Standard & Poor’s – argues that maintaining pretty large external surpluses will be essential to maintain GDP growth at levels high enough to prevent social unrest.

Chemicals companies should therefore prepare for the possibility of a deflationary environmental in Europe, and possibly elsewhere, and all that this would mean for volumes and their pricing power.

As the BBC’s Robert Peston has pointed out:  “If businesses and consumers began to believe that deflation was a serious prospect, they would defer purchases and investments to take advantage of falling prices – and the members of the currency union would be right back in the soup, with their economies shrinking sharply.

“Worse still, there would be an even greater incentive for businesses, households and banks to reduce their debts – to save as if there’s no tomorrow – because of the threat of deflation increasing the real burden of those debts.  And that would be a double whammy to spending or investing today, and thus to the recovery.”