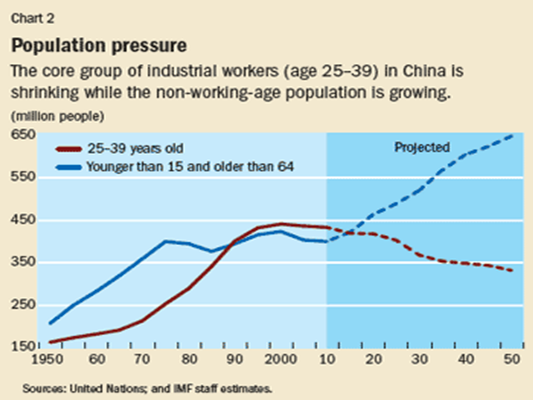 CHINA’s blue collar workers are in a very strong position, as we discussed in our 19 December post.

They are benefiting from an ageing population that has already resulted in a decline in the size of China’s working population. Thanks to the laws of supply and demand, wage rates are going up and factory workers are in a stronger position to demand much better working conditions

This January 2012 New York Times investigation into working conditions at Foxconn – the assembler of Apple and other consumer electronics products – was probably the most high-profile example of an increasing focus on workers’ rights.

But the balance between supply and demand is, of course, constantly shifting.

Tighter labour has, for example, led to a greater demand for automation, as Gordon Orr, a director in the Shanghai office of McKinsey points out when he writes in this article: “The paradox of rising input costs (including wages), the productivity push, and technological disruption is that they collectively undermine job growth, at the very time China needs more jobs. Millions and millions of them.

“While few companies are shifting manufacturing operations out of the country, they are putting incremental production capacity elsewhere and investing heavily in automation.

“For example, Foxconn usually hires the bulk of its workers for a given 12-month span just after the Chinese New Year. Yet at the beginning of last year, the company announced that it wouldn’t hire any entry-level workers, as automation and better employee retention had reduced its needs.

“Although upswings in the company’s hiring still occur (as with last year’s iPhone 5S and 5C release), the gradual rollout of robots will probably reduce demand for factory workers going forward. In short, many manufacturers—both multinational and Chinese—are producing more with less.”

(Some low value plastic processors have already shifted overseas, to countries such as Vietnam where labour costs are lower. Very integrated supply chains has, however, limited the shift overseas.)

Automation also has consequences for the white collar workers who are already in a much weaker position than their blue collar counterparts, once again because of the laws of supply and demand (for more details you can again refer to our 19 December post).

Andrew Batson and Thomas Gatley, in an article in the December issue of the China Economic Quarterly, attribute this weaker position to lower educational standards that have led to a rising number of graduates. The number of graduates is set to peak at more than 7 million in 2015, they estimate.

“Even business-to-business sales folks may find themselves partially disintermediated by technology, and rising numbers of graduates will have fewer and fewer jobs that meet their expectations. They will not be happy about this and may not be passive.”

And so how will Beijing respond?

It seems to be caught between the rock of needing to upgrade technological skills in order to escape the middle income trap and the hard place of having to generate enough jobs to guarantee social stability.

The McKinsey consultant thinks one result will be that “while state-owned enterprises will feel pressure to improve their performance, to use capital more efficiently, and to deal with market forces, they are likely, at the same time, to face pressure to hire and retain staff they may not really need.

“The government and the leaders of these enterprises have long argued that such jobs are among the most secure. They will find it very hard to declare them expendable.

What might all of this mean for the overall strength, volatility and detailed composition of chemicals demand growth?

This is a huge question that would need to be tackled in a series of studies covering all of China’s new social, economic and political challenges.