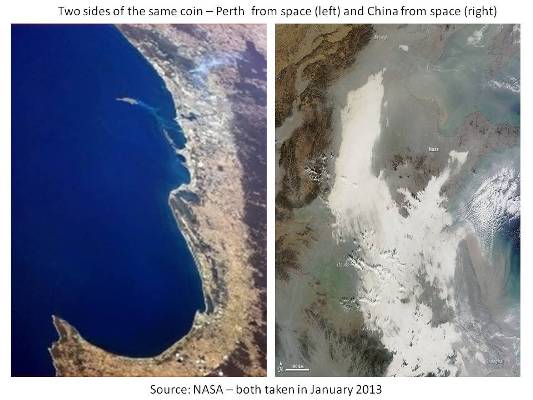 WESTERN Australia is still in the midst of the tail end of a golden economic sweet spot, thanks to a once-in-many-generations resources boom.

People are not only benefiting from the fantastic money that is being made by working in the iron ore, gold mines and liquefied natural gas (LNG) plants. All those employed in the service industries linked at a first, second or third level to the resources boom have also benefited.

Hence, the suburbs of Perth, where the blog lives, are filled with giant houses, private swimming pools, boats, top-of-the-range SUVs and jet skis.

It would be unfair, though, to believe that this might have automatically happened in any other region similarly blessed with resources. There is a tremendous “get up and go” attitude in WA and many small businesses display bags of initiative. There is also a refreshing lack of snobbery, a generosity of spirit and a very strong sense of community amongst many of the people the blog is luck enough to know.

But it certainly helps that when you set up a business you don’t have to worry about food, fresh water, sanitation and electricity supply in Australia – and that because you grew up with these necessities, you had a very good chance of getting the education you needed to be able to launch a business. All of us in the developed world are similarly lucky, even if we don’t live in a country or region bursting at the geological seams with iron ore or shale gas.

Nothing, though, lasts forever and prosperity in the West can come at a price that, eventually, developing countries no longer want to pay.

For instance, in the case of China, its investment boom – which has so effectively supported the prices of iron ore, copper etc – has created very harmful social and economic distortions.

Environmental standards have been flouted, for example, in the dash for growth, but all the signs are that this is changing.

“China has set new targets for its provinces to reduce air pollution by 5 to 25%, state media said late on Tuesday, underscoring the government’s concern about a source of public anger,” wrote Reuters in this 9 January article.

China’s demographics are adding to the pressure for Beijing to act.  Because of very tight blue-collar labour supply, no longer are many of its workers prepared to accept poor working conditions and polluted water, air and food.

And there is the end of the demographic dividend in the West.  Even if the investment and export-processing model was still sustainable, the demand in the West is no longer there to justify the model.

What might this mean for Australia? It could, for example, mean that:

These are the extreme points of a continuum, of course, and so it might be likely that the outcomes fall somewhere in between the extremes.

But we are living in a VUCA world (volatility, uncertainty, complexity and ambiguity), and so “social”, as well as economic, accounting exercises have become essential in order to protect against these risks.

Western governments and chemicals and other companies need to use these social accounting exercises to come up with new policy directions and manufacturing strategies.

The alternative is a retreat into an increasingly fractious, xenophobic, protectionist and dangerous world that would ultimately benefit nobody.