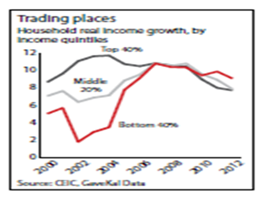 HOW useful a tool is GDP in measuring petrochemicals demand growth in China?

This is a question that every research department in every petrochemicals company needs to ask itself.

During the Supercycle era, Chinese demand growth was pretty much a proxy for strong consumption growth in the West.  Because of ample availability of consumer credit in North America and Europe – and also because of favourable demographics – life was easy. Many of the petrochemicals molecules that were shipped to China were shipped back to the West in the form of refrigerators, TVs etc.

Assured strong  demand for exports, ample availability of cheap labour in China – and  the country’s heavy focus on the quantity as opposed to the quality of growth – also meant that as the West boomed, so did China’s domestic consumption of petrochemicals.

Of course, we haven’t suddenly woken up post-Supercycle to find ourselves at the beginning of Year Zero.

China remains a very powerful manufacturer of finished goods and this is likely to continue for a considerable period of time, despite increasing labour costs.

Plus, the demographics-driven decline in demand in the West is gradual, as has been the case since the late 1980s in Japan.

But the transition away from being able to rely primarily on GDP as a tool to measure demand growth is very much underway, we think. For example, as the polyethylene (PE) story shows, the last six years in a row has seen demand growth well above or below that of GDP. We are now into the seventh year of this trend.

The good news, as we discussed in July,  is that even though China’s GDP growth rate might fall – even to as low as 3-4% – over the next decade, this doesn’t necessarily mean much-lower growth in demand for petrochemicals and polymers.

As the economy becomes increasingly domestic-focused, and thus less of a proxy for what is happening in the West, tens of millions more Chinese are likely to cross the income thresholds that will enable them to buy modern-day consumer goods, made from petrochemicals, for the first time.

The bad news is that you can no longer just take, for example, the IMF or World Bank projections for Chinese GDP growth, and, from this basis, plot pretty much a straight corresponding upward line of petrochemicals demand growth over the coming years.  Growth will, we think, be increasingly hard to plot – involving numerous complexities

Regional disparities will play a role here, for example, stronger “catch-up” growth in the less-developed western provinces compared with the southern and eastern provinces –  along with, as we said, the connected part played by income thresholds.

The science, or perhaps more the art, of forecasting will thus be increasingly iterative – improving step-by-step – as the factors shaping growth become clearer.

Another very good example of what we are talking about appears in an article in the fourth quarter 2013 issue of the China Economic Quarterly, where authors Andrew Batson and Thomas Gatley  discuss the narrowing gap between the income levels of blue collar and white collar workers in China (see the above chart from the article).

“For the lower-wage sectors of agriculture, manufacturing, construction and retail, wage growth has stayed steady at 14% annually.”

They attribute this to the laws of supply and demand – i.e. a diminishing increase in the supply of blue collar workers versus a surge in the availability of fresh graduates.

“As of mid-2013 there were 125 blue-collar job openings posted for every 100 applicants, compared with 80 openings per 100 applicants for white-collar positions,” they add.

“This dynamic is precisely what is pushing the top and the bottom of the wage scale closer together.”

And they continue that this is marvellous news for consumption growth, given the propensity of lower-income workers to spend more of their new-found wealth than their middle class counterparts.

“Given that we think the official national accounts undercount household spending, the underlying trend should be even more positive.”

This dynamic is set to continue until at least 2015 as a result of a steady increase n the supply of new graduates versus a further decline in surplus cheaper labour, they argue.

Good news, yes. But, as with many of the other silver clouds hovering over China, there is a dark lining: Angry graduates could be a significant threat to social stability, as they face both a declining wage advantage and increasing unemployment. This downside is a subject that we shall cover in detail in a later blog post.

Suffice to say here, though, that this particular dark lining further illustrates our argument that you need a complex, multi-layered and constantly evolving approach to measuring petrochemicals demand growth in China from now on.

We are here to help you build that approach.