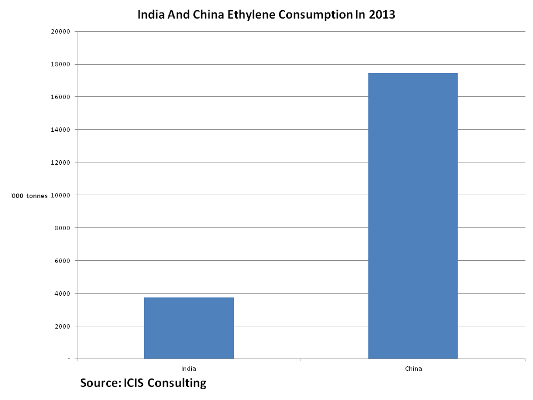 DEMOGRAPHICS can drive chemicals demand in the right direction, provided the correct government policies are in place.

India’s demographics are much better than China’s, as this data from the CIA Factbook indicate. For instance, as of 2013 India’s median age was 26.7 years compared with 36.3 years in China. India’s birth rate was 20.24 births per 1,000 of the population compared with just 12.25 in China.

The question then becomes whether Indian politicians can take advantage of this “demographic dividend” in order to narrow the big between itself and China in terms of chemicals consumption (see the above chart detailing ethylene).

This is a subject far too big for one blog post and we also want to widen the debate, to canvass as many views as possible from India about the policy prescriptions necessary to narrow this gap.

(We say narrow rather than close the gap, by the way, because we do not believe it is realistic to hope that India will catch up with China in the foreseeable future. And, anyway, should India actually want to catch up with China, given all the issues around sustainable growth?)

One challenge, which we will discuss here, in order to start this debate, is energy.

More than half of India’s $191bn trade deficit in the financial year to March 2013 – $109bn – was made up of oil, with India importing 82% of its oil needs, mostly from the Arabian/Persian Gulf.

“The whole mess in the current account deficit is due to the imports of both coal and oil,” Vivek Pandit, senior director for energy and the Federation of Indian Chambers of Commerce and Industry told the Financial Times in this 12 September 2013 article.

Oil import dependency is forecast to grow another 10 percentage points to exceed 90% by 2031, the newspaper added.

India, which is set to overtake China as the most populous nation, is already the fourth biggest energy consumer on the planet, after China, the US and Russia.

Indian energy use is growing rose 5.1% last year to the equivalent of 563.5m tonnes of oil, according to the BP Statistical Review of World Energy, though per capita consumption is still less than a quarter of the level of China’s.

All but the last of these objectives could fall the victim to politics as a General Election is due by May 2014.

And so it was great news that the domestic gas price could be substantially increased. It is estimated that India is 60-70% energy unexplored, including coal as well oil and gas, and so the opportunities are huge.

The Indian government has officially announced that, from the start of the next financial year (1 April 2014), it wants to increase gas prices to around $8.4 per million metric British thermal units (BTU) in from $4.2 to $5.7 per BTU at present.

This could lead to a substantial increase in production, says this 13 January FT Beyondbrics blog post.

“Reliance Industries could up its production of natural gas to almost double current levels by 2018 if gas prices are raised, bringing the group’s output to 50m standard cubic metres every day,” the post adds.

However, India’s Supreme Court will hear petitions against the government’s decision on 4 March.