Home Blogs Asian Chemical Connections China Is “The Fragile One”

China Is “The Fragile One” 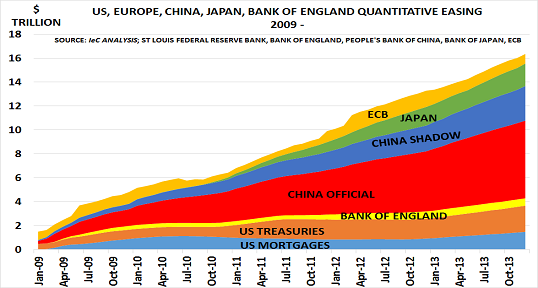 THE “Fragile Five” might, as we discussed on Monday, have become “The Exposed Eight” developing countries threatened by a disorderly Fed tapering.

But what if, in all the focus on the Fed cutting back on quantitative easing, we have overlooked a far bigger withdrawal of central bank largesse – that which is now taking place in China? The bulldozers could be moving in right now in China, both metaphorically and literally.

“China has spent the most, with $6.5tn since 2008 gone on official lending (see the red shade area in the above chart).  It has also allowed an unregulated shadow banking system to develop – just as happened with sub-prime in the US before 2008,” writes fellow blogger Paul Hodges, in this post (this is the first of a series of posts on China that are well worth following on Paul’s blog. Later on, we plan to publish our conclusions about what this means for China over the next five years and beyond).

“Nobody quite knows the real size of this shadow banking sector.  The chart uses the $3.2tn estimate of a recent report by the Academy of Social Sciences (dark blue). Western analysts such as JP Morgan suggest it could be $5.7tn (69% of GDP).  Fitch suggest China’s total official/shadow debt could be $16.3tn (double GDP),” ,” adds Paul, in the same post.

We have long said that it was only a question of when, rather than whether, China would have to address its imbalances.

These, of course, not only include a potentially systemic bad-debt crisis, but also a related massive oversupply of industrial capacity, a property bubble, a chronic pollution crisis and the need to swiftly move up the Lewis Curve in order to provide jobs for its millions of new graduates.

Has the “when” finally arrived? Most analysts think that, at the very least, growth will further decelerate in Q1 as Beijing cuts back on bank lending.

And this could also be the moment where we see the start of widespread restructuring of all that overcapacity, including low-value plastic processors. One polyolefins industry source told us recently that it is possible that thousands of these converters could be allowed to go bust before, or perhaps immediately after, the Chinese New Year – which falls on 31 January.

The Financial Times is, perhaps sensibly, hedging its bets when it writes in this article: “In each of the past two years, slower growth in the first half of the year prompted Beijing to wave in its commitment to reining in credit-fuelled infrastructure investment.”

The newspaper added that this led to looser policy in H2 2012 and H2 2013 in order to prevent growth from slowing by too much. In July of last year, the blog highlighted a shift in China’s policy direction as it sought to shore-up growth. We will keep our eyes similarly peeled during 2014.

But the FT is with the blog when it adds: “If the government continues to turn the taps on and off in fear of slowing growth, the much-vaunted rebalancing of the economy may be perpetually delayed and the eventual reckoning could be worse than the slowdown its leaders are trying to avoid.”

If the when is, indeed now, perhaps we should quickly coin a new phrase: “The Fragile One”, which would refer to both China and the global economy.

PREVIOUS POST China: The Cost of Shutting Down
NEXT POST Dow Chemical And Back To The Future