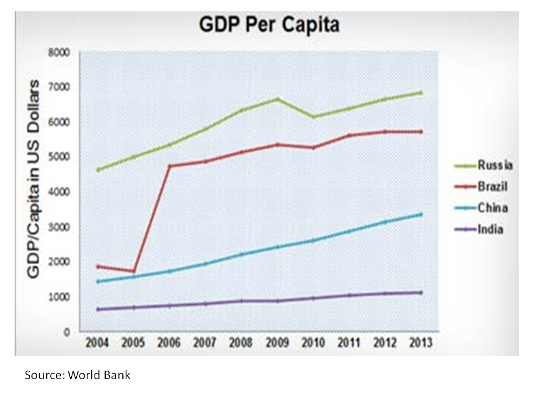 INDIA is at risk of squandering its demographic dividend, warned investment bank Espirito Santo when it wrote in a September 2013 note:

If India continues its current path it will face a catastrophic shortage of jobs, creating a young and angry population, and with it conditions for social unrest and economic disaster.

Whether India exploits or is undermined by its demographics will likely be determined by the policy choices over the next two administrations. It simply cannot afford a repeat of the last five years.

Manufacturing’s importance [in India] has stagnated for 40 years and now contributes 15-16% to GDP, employing only 10.2% of the labour force. Services has meanwhile grown its share nearly 10% every decade to 60% of GDP today. But employment creation hasn’t kept pace, with the labour force share growing from 17% in the early 1970s to 27% today.

This precocious development model isn’t sustainable. Services are unlikely to employ more than 25-30% of the incoming labour force over the next decade. Manufacturing will have to pick up the bulk of the rest. Yet manufacturing has added jobs at only 1-2 million a year since the 1970s, and actually lost 7 million jobs between 2005-2010.

And whilst manufacturing isn’t creating enough jobs and the nation faces a huge labour surplus, services actually faces a shortage of people with the right skills for the kinds of jobs it is creating, causing wage inflation in the sector which risks eroding its comparative advantage. If these scenarios play out in tandem, and they will if current trends continue, demographics would create a disaster – not a dividend.

Our point in this note isn’t that India should follow the East Asian model. Its development path has been and will be different. India’s growth of and comparative advantage in services is to be celebrated and fostered,” the bank continued.

Our tone in the note might seem pessimistic. But our point is really that India’s ability to exploit its demographics over the next 20 years, or to be undermined by them, remains highly uncertain, and will be probably be determined by the policy choices and implementation of government, and probably by the next administration. That is how urgent the challenge is.

Amy Kazmin of the Financial Times said in this 16 January article:

The Crisil report estimated that India, which created 52m jobs in industry and services from 2004 until 2011, will generate 38m between now and 2019, trapping many rural youth coming of age in a life of agrarian poverty.

She added that this was partly the result of restrictive labour practices that had let to employers preferring to invest in automation rather headcount.

The author also cited lack of urbanisation another problem. The CIA Factbook estimates that the percentage of India’s population living in urban areas was 31.1% in 2011 as against 50.6% in China. And as our last link also illustrates, India falls behind China on many other important economic and social measures.

The FT article adds that since 2006, New Delhi has allocated around $25bn to rural poverty relief, which critics claim has exacerbated labour markets problems.

The Federation of Indian Chambers of Commerce and Industry and other business groups want a redesign of the rural jobs scheme to allow some young people to attend vocational training that would prepare them for jobs in textiles, construction or other sectors.

The government’s decision on natural gas pricing is a step in the right direction. It might help create the environment that encourages more investment in manufacturing. But will low-income Indian citizens be able to afford the higher gas prices? Thus might more wasteful subsidies be employed to cushion the blow or could it be that the price rises do not, in the end, happen?

But perhaps the new government due to take office after elections after May 2014 will introduce some breakthrough policies.

Let’s hope so as the right kind of politics everywhere, not just in India, have become much more important for achieving healthy growth than has been the case for many, many years.

The reason is that when economic circumstances are benign, strong growth happens despite dysfunctional politics.

And it now applies to India as it confronts both its demographic crisis and the eventual, inevitable end of almost indiscriminate Western investment flows.