The US Growth Conundrum 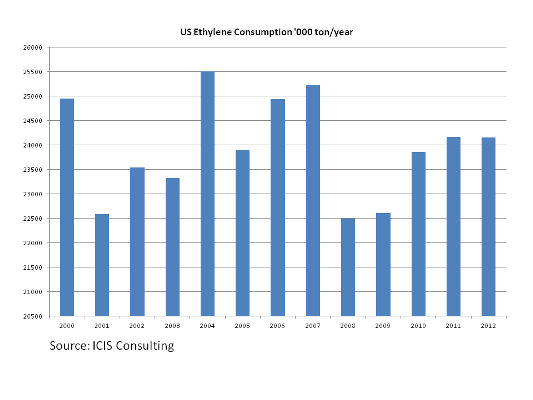 WHERE is the growth in the US economy going to come from to consume the big increase in the country’s ethylene and derivatives production due to take place from 2017 onwards?

This is a question that continues to trouble the blog when we study charts such as the one above.

It is possible to argue that the shale gas and tight oil revolutions will, by themselves, be enough to underpin a manufacturing revival in the US sufficient to absorb most of the extra petrochemicals volumes.

But you still have to have sufficient demand for the things that you make, no matter how low your production costs and in the US – as is the case elsewhere in the West  – demographics are a major challenge.

Sure, birth rates amongst many first or second generation immigrants in America are much higher than amongst the country’s wealthy middle class.

But the “trickle down” affect isn’t working and might never work because of the nature of US politics. This makes it seem very unlikely that a big-enough cohort of Americans will emerge to replicate the impact of the Babyboomers, who gave such a tremendous boost to growth in 1983-2007 when they were at the height of their earnings potential.

Export the ethylene derivatives surpluses? In a perfect free trade world, yes, but as we discussed last week, Asia will do what suits Asia – and that might well involve the erection of trade barriers around regions such as Southeast Asia in order to protect local petrochemical industries.

As for China, well, who really knows what the next ten years will bring in terms of petrochemicals import requirements?

And why should the European petrochemicals industry roll over and die in order to accommodate a flood of competitively priced US imports?

Why build capacity, just because you have the feedstock advantage, when charts such as the one above show that we are still waiting for a full recovery in ethylene demand six years after the onset of the global financial crisis?

PREVIOUS POST China and India: When Over-Investment Is A Good Thing
NEXT POST Oil Market Risks For 2014